One Does Not Simply Walk Into Mordor – Previewing The Scum Forwards 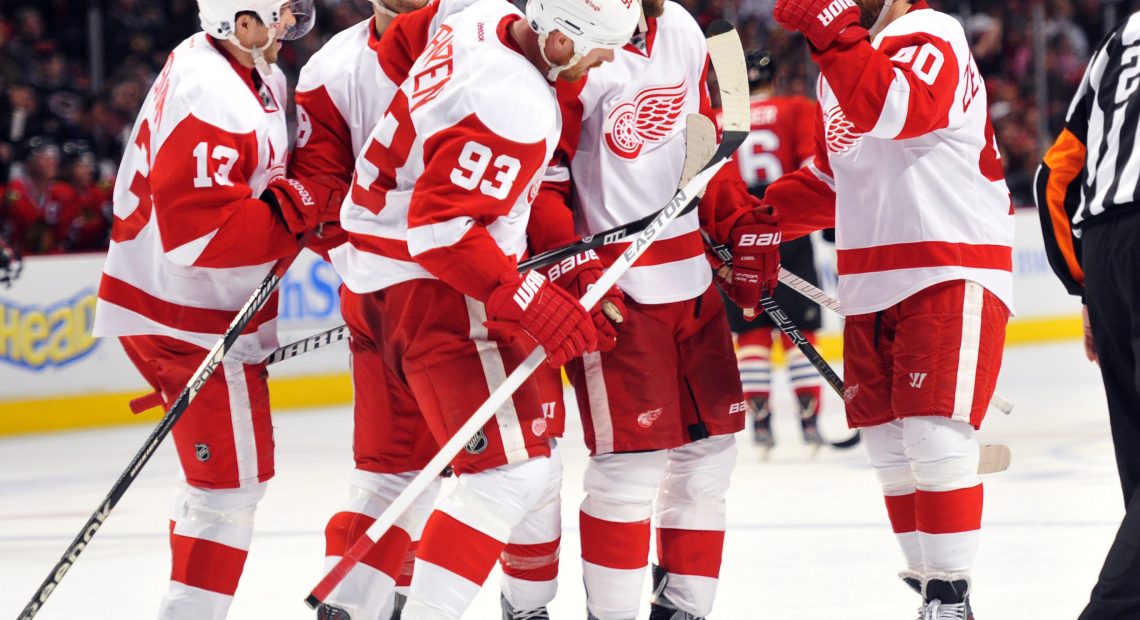 Now that the Hawks finally have a second round opponent, it’s time to take a closer look at the Detroit Red Wings’ forwards. The names and faces might be familiar and nauseating, but it’s a necessary evil. So plug your nose, and we might be able to get through this together.

Coach Mike Babcock jumbled his lines for the final two games against the Ducks in order to separate Pavel Datsyuk and Henrik Zetterberg to get a more balanced attack. But lines started out in game 7 as follows with Dats and Z together:

Obviously, the top threat the Wings possess is the Datsyuk line, either with or without Zetterberg. Both had an excellent series against the Ducks, with 2G and 5A for Dats, and 3G and 5A for Z.  However, it won’t be surprising to see Franzen and Zetterberg flip flop when facing the Hawks, as Babcock will want to space out his defensive awareness against a team that wants to run and gun like the Hawks. Franzen’s ugly -5 to go along with his three goals against a team not nearly as quick as the Hawks show that he can be exposed, as he’s simply no longer as quick as he used to be to be a banging physical force.

Despite only playing in five of the games due to his suspension and only having three points in the series, Justin Abdelkader has been making his presence known on Detroit’s top line since getting slotted in next to Datsyuk late in the year. As evidenced by his illegal hit on Toni Lydman, Abdelkader is not afraid to get physical on the forecheck, and is one of Detroit’s only top 6 threats in that regard, so look for him to hound the Hawk defensemen, likely Keith and Hjalmarsson down below the goal line.

Scum’s third line sports a couple of newcomers, Gustav Nyqvist and Damien Brunner, both of whom have OT game winners to their names from the series against Anaheim. Brunner has been the more productive of the two, with 2G and 3A, as Nyqvist and centerman Andersson have only two points a piece. The fourth line has been a mish-mash of veterans and youth for Babcock with the aging criminal Bertuzzi and long-time ass-rash Mikael Samuelsson mostly absorbing minutes and not doing much else down there. Drew Miller, Patrick Eaves, and professional dickwad Jordin Tootoo have all been platooning in and out of the lineup as health has warranted.

A couple notes on the forward corps as a whole. First, is that the team’s primary three centermen, Datsyuk, Filppula, and Andersson are all well over 50% at the faceoff dot, which could pose some problems for the Hawks. With Jonathan Toews being the only Hawk consistently able to win a draw, making a Hawks team that’s not built to chase and forecheck without the puck will be key for Scum, especially considering they still want to play the same possession game they have in the past, despite not having the same level of firepower.

And regarding that firepower, over the course of seven games, the Wings were outscored 13 to 11 at even strength by the Ducks, which is why you’ll see a rash of minuses up and down the scoresheet. The Hawks will not be able to continue the parade to the box they found themselves in in games four and five against Minny, as Scum has the veteran smarts to make the Hawks pay on the kill. It’s important right now to realize that the Hawks will not hold Scum to bagels across the board on the advantage, so there’s no need go batshit when it happens, providing the timing isn’t catastrophic. But playing a more disciplined game to keep things 5 on 5 will absolutely be in the Hawks’ best interest.

Joel Quenneville will assuredly not be nearly as cavalier about rolling all four lines regardless of matchups in this series, especially if Datsyuk and Zetterberg remain apart. Dave Bolland’s return could loom large depending on where he’s slotted in, though at practice today he was back in his usual spot being flanked by Kane and Sharp. Look for Babcock to try to get the Datsyuk line out against this unit, as they can be hemmed in from time to time, and Dats’ puck wizardry can only exacerbate that for the Hawks. If that’s the case, look for Q to respond by getting them away from Dats when at home, even if it’s against Zetterberg on another line, as he dictates far less from the wing with Filppula as his center.

This is about an ideal a matchup as the Hawks could ask for. The lack of a punishing forecheck (with some exceptions) from the Wings should make life a little more bearable for the Hawk defensemen, allowing them to make a tape-to-tape pass with time when breaking out, and keying the Hawks attack. Likewise, the Wings are built to carry the puck over the blue line on zone entry, and the Hawk D are fare more adept at standing up rushing puck carriers than mucking in the corners. If the Hawks can keep things five on five and at least keep things reasonably close at the faceoff circle, they should give themselves plenty of time and space to operate in this series.

Tags: Dave Bolland Hawks henrik zetterberg Justin Abdelkader Not With Ten Thousand Men Could You Do This Pavel Datsyuk Scum