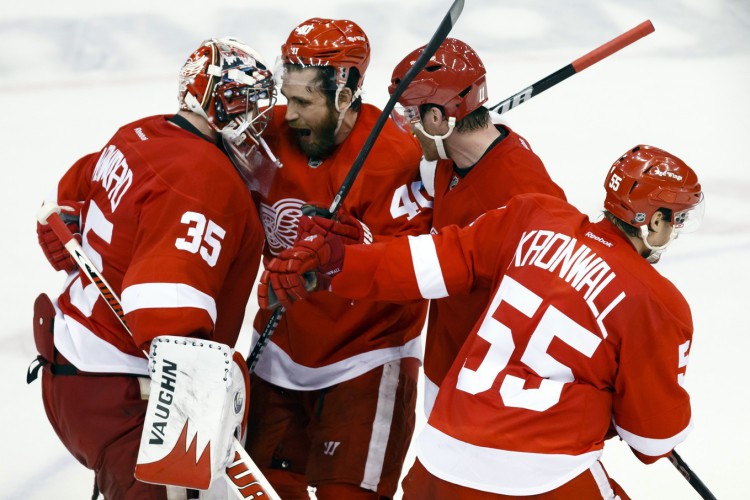 While the forwards that McClure previewed still have some threat and generational skill sprinkled throughout, when Hawks fans look at this back end is when they probably start licking their chops. The Scum defense was passable enough to see off a Ducks team that really only has one threatening line, as suddenly Teemu Selanne and Saku Koivu looked every bit of the combined 175 years old that they in fact are. They will get no such respite here.

Here’s how the pairings shake out:

Delicious. Wings fans will tell you that they’ve been effected by the injury to Danny Dekeyser. But if you were depending on a player that is only weeks out from keg stands at a frat house before passing out on the quad, you have bigger issues than you’re admitting. One other lineup note, if any injuries occur or Babcock completely loses his marbles, Ian White will be brought in and I’ll probably have to be put down as I’ll be frothing at the mouth giggling and there will be no return.

Kronwall and Ericsson will draw whatever Babcock deems the toughest assignment, likely to be Toews’s line. We’ve documented Kronwall’s inadequacies since our inception, so if you’ve read us for any time you’re probably quite familiar. While he’s got a cool catch-phrase (the secret to comedy according to Zanie’s owner and full-time douchebag Bert Haas) and it can’t be too easy to play a game when Pierre McGuire is constantly trying to get you to put your finger in his butt, Kronwall remains to us massively overrated.

He chases hits over keeping sound positioning, is too quick to shotgun up the ice to join the rush at times, and can be beaten to the outside as well. That said, Kronwall’s play toward the end of the season — when the Wings really needed it — improved by a significant margin. He’s toned down some of the recklessness of his play and is a more steady presence.

He has to be, because despite the improvements in Ericsson’s game, he’s still not equipped to play centerfield for Kronwall’s walkabouts in the outback. The other Swede has improved his skating from the Lindy Hop he used to be, but is hardly swift. He has a big body that he doesn’t always use to his advantage. You feel Saad and Hossa could win their share of battles if indeed this is who they find in the corners.

But once you get past this top pair, it’s ya-ha time. Whatever you consider the Wings second pair, they’re going to have to face a real threat. Jakub Kindl does what he can, which considering he’s been generally paired with the remedial class could be considered heroic. But to ask him to be Atlas to the Hawks globe is a bit much. Colaiacovo is only playing because Dekeyser got hurt, and you saw enough of him in St. Louis to know that when he’s on the ice it’s time to feed your Frankenstein.

Brendan Smith has been trumpeted as the next thing for so long that it was probably impossible for him to come close to living up to it. Another one in the Kronwall mode who can get lost on the ice and then starts to try to do too much. When he gets running around there is going to be trouble.

Kyle Quincey has been the main target for Wings fans since he arrived there last spring, and generally appears as if he can’t do anything right. Ostensibly a puck-moving d-man, it’s just hard to figure out a lot of the time where or to whom he’s intending to move that puck or himself.

It may seem a tad harsh on the Wings D, but this is really a sweetheart deal for the Hawks. Even if Kronwall and Ericsson max out and turn into a dominating pair (don’t count on it) the Hawks depth should really feast on a bottom two pairings that doesn’t excel in any one particular area. Bickell and Shaw can bang on Kindl, Colaiacovo, and Quincey. Sharp, Kane, Stalberg (if Q stops have an embolism and slots him where he needs to be),  Frolik and Kruger can skate around them. In the regular season matchups, it’s been the bottom six of the Hawks that have feasted on this blue line and kept them pinned down.

I would expect no different this series, which is why I really won’t be shocked if Babcock elects to throttle down and employ something of a defensive game. He knows he can’t run with the Hawks, and he knows he can’t expose this blue line for too long before windburn is achieved.