Well Pilgrim, Not Until You Eat The Peanuts Outta My… – FFUD’s ’17-’18 Player Reviews – John Hayden or What Is This That Stands Before Me? 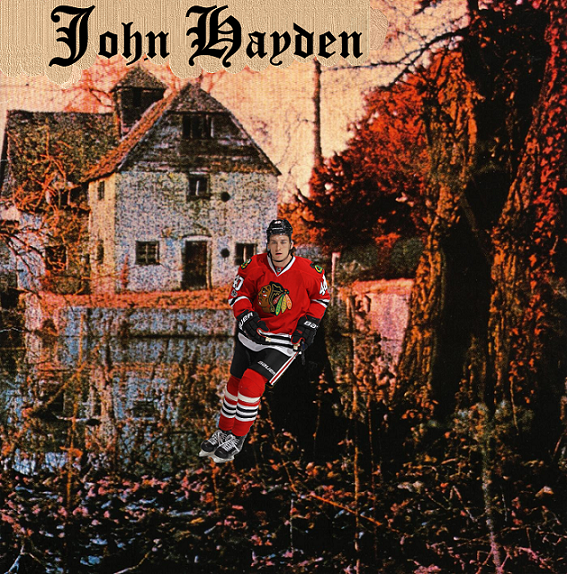 There’s a bit of a fuzziness to it, but John Hayden ended up playing more than half of the games on the schedule for the Blackhawks. He was here until January, got sent down to Rockford, then came back up in March. Do you remember much about what he did? Because I sure don’t.

What We Said: He probably won’t be more than an answer to a trivia question in a few years (Who was the 20th Yale Bulldog to crack an NHL roster?).  He’s the Atlas Shrugged of hockey players: not nearly as great as his proponents say, an overhyped tome of theoretical muck whose pedigree rests mostly on his size and standing out among the mediocre.

The best answer I can come up with is probably no more than a bottom-six puck absorber. And really, that’s all Hayden will ever have to be on the Hawks. In the time he was up, he spent most of his time with other Blackhawks castoffs, Lance Bouma and Tommy Wingels. You’ll certainly take the 13 points he provided skating primarily with and against the dreck of the league.

The most surprising thing about his year was his zone-start ratio. When we previewed Hayden at the beginning of the season, I wondered whether Hayden was a “start in the offensive zone” kind of guy, and this year showed he wasn’t. He tended to fall more into what would have been a Marcus Kruger–line role. And all of his advanced stats reflect that: His Corsi and expected goals for percentages all reek of a guy who spends most of his time in the ass-end of the ice.

Hayden also played the role of tenured fighter, leading the team with four fights. I had always held out hope that with his improved skating, Hayden could be a sneaky scorer on the bottom half, but it looks like the Blackhawks expect him to be the guy who initiates fights for HOCKEY REASONS. Much like every Yale graduate ever, the idea of John Hayden being more than an exhausting waste of time and money always flatters to deceive.

Where We Go From Here: Assuming Hayden doesn’t get traded to a team looking for some dick-swinging grit (looking at you, Tom Dundon), he’ll likely do the same thing he did last year. He’ll putter around on the fourth line, have a few fights, then play a few shifts with Toews because he’s DA BIG BODY WIT A BIG HEART DEY NEED IN FRUNNA DA NET. We’ll see a few flashes of skill from him before he bares his red, overeducated ass, because the myth of the rough-edged hockey fighter scraping out a living despite the odds gives no quarter.

Ideally, we’ll see Hayden on the fourth line with guys like Kampf, Wingels, and Highmore. He’s a useful guy if you’re looking to build a line that acts as a big meat slab, which looks like the direction the Hawks are going to go with him, judging by his fancy stats and zone starts. He might even be able to find a home next to guys like Ejdsell and Sikura, and that might work out too. He’s got just enough skill to run with guys like them, and doing it on the bottom lines might open the Hawks up to some much needed depth scoring.

At the end of the day, John Hayden is like the Kevin Orie or Jorge Fabregas of the Blackhawks: Just good enough to stick around, but never much more than a hazy memory.