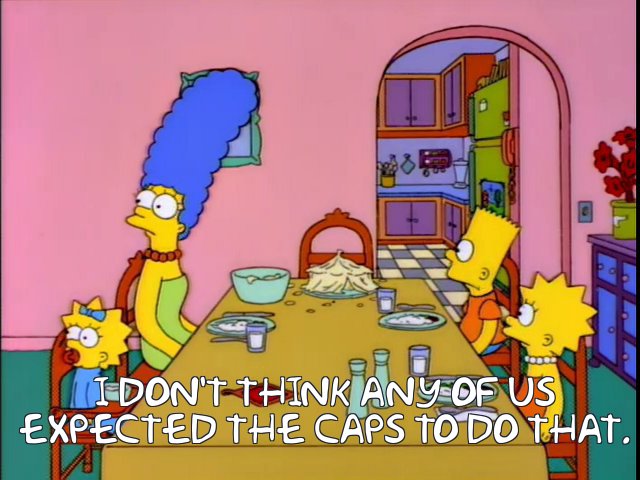 One in a state of shock, one game went exactly as planned. It’s the NHL on NBC!

I guess this is what everyone else felt last year when watching the Preds roll over the Hawks from the outside. But I think that made more sense than this. At least Game 1 of that series was close. The Lightning haven’t even been in the same zip code as the Capitals. And I can’t believe I wrote that sentence.

I suppose if there’s one thing we can point to, it’s that the Lightning’s blue line was overhyped. But it mostly didn’t matter because their forwards were so good, and there was “God Mode” within Victor Hedman to cancel it out even further. You saw in ’15. So you know it’s there. Well, the Caps don’t seem to care, and have greatly exposed Stralman, Girardi, Coburn and even McDonagh–who’s a good defensive guy but has never been a mover and that’s getting wildly demonstrated. Meanwhile Hedman has been tentative and unnoticeable, which is just really weird. The only d-man who seems to be able to survive the Caps’ forecheck is Sergachev, mostly because he’s fearless and not having to see the best the Caps have to offer. Stralman and Girardi look like they just discovered there’s a bear in their breakfast nook.

It hasn’t helped that Cooper has coached this series with both hands around his neck instead of his usual postgame belt in the shower. His team look completely shell-shocked, and they seem to be playing right into the Caps hands by either not bypassing the forecheck as the Penguins did the past two years or having his forwards help out. Then when the Caps set up three at their own line every Bolt seems content to just charge headfirst into it and lose the puck and the whole thing starts over. And then they panic, and their defense goes charging everywhere in the offensive zone and they’re giving up an odd-man rush a minute.

If there’s one team that could surrender this momentum it’s the Caps. But man they would really have to like, shit themselves to a dysentery-like level. Because it’s one thing to disrupt and it’s another to cash in, and right now at Ovechkin and Kuzentsov and Eller and Beagle, they all can’t miss. It’s been astonishing.

This was more to form, though only one game. But in Game 1, the Knights saw what was always going to be their biggest problem. A team that can play their game, is willing to, and can do it with better talent. The thing with the Knights during the season is it’s hard to find a team in February and January that’s going to want to skate back as hard to catch them going forward. It’s easier to inspire players to bust it up the ice during the season than it is to inspire them to bust it back. Think the mid-2ooos Suns. Or why Tom Thibodeau’s teams want to murder him by Valentine’s Day.

Well, inspiration isn’t a problem in the conference final. The Jets smell it. So they can get back and negate the get-it-the-fuck-up-there ways of the Knights by getting the fuck back there. How many passes did they pick off on what Knights players thought were odd-man rushes only to find a backchecking forward closing it off? That’s how the Knights get you, and if they don’t have it they’re proper fucked.

I don’t know what to make of Byfuglien. Everyone knows I’m probably the polar opposite of his fan but he was marvelous in Game 1. Then again the Knights didn’t try and get him off his game which is so easily done and it was so fast it didn’t matter that he was rarely where he needed to be defensively and he was making so much happen at the other end. Maybe you just accept the show. Anyway, if the Jets get Game 2 tonight in any sort of similar fashion as Game 1 you can start penciling them in. I don’t know what Vegas’s Plan B could possibly be.