Game #54 – No One Speaks English And Everything’s Broken, And My Stacies Are Soaking Wet – Hawks 2, Stars 4 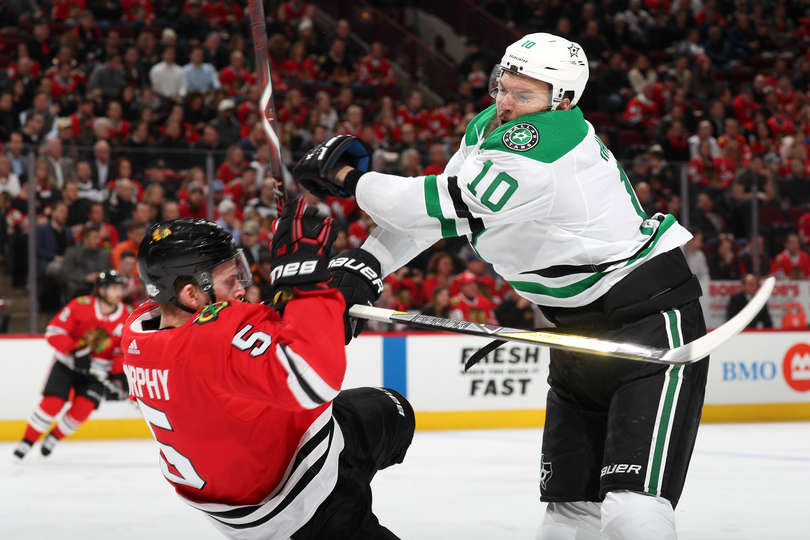 The Hawks, in the words of the inimitable Tom Waits, are a battered old suitcase to a hotel someplace, and a wound that will never heal. To the bullets.

– Brent Seabrook had a positively wonderful game tonight. His pass on Toews’s goal channeled 2013, and his purposely wide shot on Arty the One Man Party’s PP tally was a tangible example of the excellent passing we’ve always loved about him. Plus, his Corsi was a robust 67+ at 5v5. It’s no coincidence that he played the second-fewest minutes of all Hawks D-Men at evens, ahead only of Kempný. I don’t know about you, but even with the Hawks losing, I took solace in watching Seabrook play well. Like hot spiked cider on a cold, unforgiving winter’s night.

– The same can’t be said about Jordan Oesterle. He had a nice run coming out of the press box cold for a while, but the magic beans he’d been consuming to give him that extra giddy-up have gone stale. His turnover behind his own net let Stephen “One of the Ones Who Got Away” Johns do his best Russ Tyler impression, burying a knuckler—that Oesterle himself may have set the screen on—from the blue line for the Stars’s second goal in less than a minute. He also had a couple of miscues in the third that ended up not doing any direct damage, but did lead to extended pressure for the Stars early in the third with the Hawks down one.  Despite this, and his 44+ CF% on the night, he played more than anyone except Keith. This is your D-corps, folks.

– Anthony Duclair seemed half a step behind everything tonight. He whiffed on a wide-open shot off a Toews pass after stealing the puck from Pissbaby Benn late in the first. His turnover in his own zone led to the Stars’s first goal. From about midway through the second onward, he was a ghost. But his possession numbers were stellar (67+ CF%). He’s still got loads of potential and needs to stay up with DeBrincat and Toews, and eventually be re-signed.

– I want to be mad at Anton Forsberg, by my heart just isn’t in it. At the end of the day, he’s a backup goaltender on a team whose D-Men are either rapidly declining, still learning, or flat-out suck. There’s not much he can do on that first goal, with Radulov firing a perfect saucer pass to Tyler Seguin off the Duclair turnover. Having Oesterle screen him on Johns’s shot can sort of be forgiven. And yes, he needs to stop fucking Tyler Pitlick’s slapper at the end of the second. But then again, it’s perfectly fitting that a guy named Pitlick would score the game winner against the Hawks tonight, isn’t it?

– Connor Murphy started the game on the top pairing and looked pretty good doing it. His CF% of 54+ was inspiring. But he was on the ice for two goals. You can argue that he took a bad angle on the first goal, but given how often he’s been flipped and jerked around this year, it’d be a stretch. And we all saw the third goal: That’s on Forsberg. You’d like to see him get more time with Keith, but with the defensive carousel that Q is throttling into overdrive, it’s impossible to tell.

– Erik Gustafsson looks more like a 5-6 D-Man every night. He’s got decent vision with his passing too, at least when Kane’s on the ice with him. I’d be interested to see him with one of Rutta or Kempný at some point.

– David Kampf probably has a future as a bottom six defensive center. His stick checking was pristine tonight, and he won a few board battles to show off his strength.

– It was nice to see Toews score tonight. He also had a 73+ CF%. But he missed a yawning net in the first off a pass through the Royal Road from DeBrincat, either because he wasn’t expecting the pass or because his skate got caught. Microcosms.

– The chocolates and flowers for Tommy Wingels tonight were a bit much. Foley, Jammer, and Burish barely had time to come up for air between all the kisses they blew at him for TROWING HITS OUT DERE. He had one good hit in the third that separated the puck and drew a penalty, but other than that, I don’t get it. He janked an uncontested rebound off the far post and did nothing other than hit guys the rest of the night. I understand the frustration over this team this year. I understand that we don’t really have any answers. But this whole DA FIRE AND DA PASHUN garbage is already wearing thin. Hits have never been the answer for this team, and they sure as shit aren’t the answer now.

– Brandon Saad did not have a good game, again. He logged a 48+ CF% with Schmaltz and Vinnie. He did set up a few good chances that went unanswered. Like all of you, I want to see him come out of his funk. He’s probably best served playing with Schmaltz and Kane again, but I get how it can be hard to justify it right now. At the end of the day, he’s a good player having both a down and unlucky year.

As it stands, this season is circling the drain. As it stands, the Hawks have good young talent on the front lines but not the back end. As it stands, without Corey Crawford, this team doesn’t have the firepower to make the playoffs.  It’s frustrating, it’s out of the ordinary, and it’s hockey, baby.

Line of the Night: “HIT SOMEONE.” –Adam Burish on how the Hawks could overcome a 3–2 deficit in the third (I usually love Burish, and I get the frustration, but it’s lazy).