It’s All A Problem 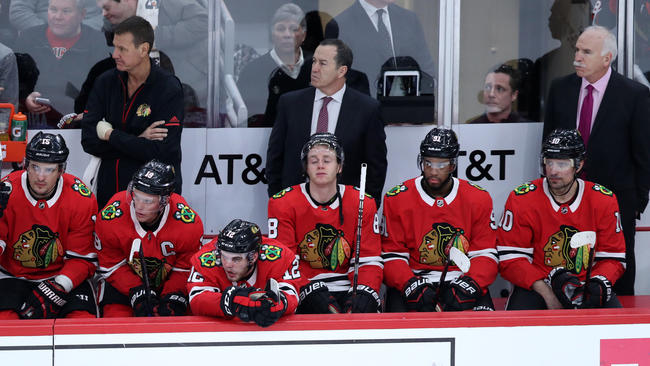 Carping off Good Sir Pullega’s wrap last night, I’ve basically sat here all morning and thought how last night’s game was the perfect showcase for everything that has gone wrong or afflicts the Hawks this season. And seeing as how it very well could be the final nail in this season’s coffin, it makes it even more poignant. But as you know I love to say, you love last night’s game. It says everything you want to say.

Let’s go through it:

We can break down the deficiencies on the Hawks roster from here until the end of the world (currently scheduled for next month), but you’re not going to get past this. Thanks to the CBA and the flattening cap, it’s nearly impossible to get your roster of skaters that much more talented than anyone else. It’s why most teams look the same. Even where you think there are gaps, they’re not as big as you think.

So it’s a goalie league. Look at the top of the standings. Tampa, Boston, Nashville, Winnipeg, Vegas, they’re all getting Vezina-level goaltending or close to it. You cannot base success without it now. It may be a devilish task to find 18 skaters that can separate you from the pack, so it’s a hell of a lot easier to find one goalie.

And the Hawks had it, but now they don’t, and you see the results. You’re tempted to not hang Forsberg completely out to dry as after all the Hawks only scored two goals. But goals change games. If he doesn’t let Pitlick’s blast in, the Hawks go into the third tied. Maybe the Stars are still tempted to lock it down as they did in the third anyway, get their point, and take their chances in the extra frame. But probably not as hard core. Maybe with just a slight loosening or a mistake the Hawks can find another goal. One goal changes the complexion of everything.

Looking back over the schedule since Crow went out, you can find a lot of points that Crow might have gotten them. Upon first glance: new year’s eve against Calgary, Jan. 5th against Vegas, Jan. 10th vs. Minnesota, home to the Leafs, maybe in Vancouver, both games recently against the Flames, and last night. Even conservatively, that’s 7-8 points on the board. How much better would things look? Even boil that down to five and it’s a totally different outlook.

And again, Forsberg is merely a backup. He’s not supposed to save your season. How many teams even have a backup that could? Maybe Saros in Nashville? Do we know that for sure? Khudobin in Boston? We saw what he looked like as a starter in the past. Kuemper is doing a fine impression in LA, but he also remains Darcy Kuemper. Let’s just say it’s rare.

I can’t help but think of Montreal a couple years ago when Carey Price basically missed the whole season. Metrically, and by other measures, the Habs were good that year. But none of it mattered because they didn’t get the saves they were accustomed to getting and needed. Ever. And that was that. Price comes back the next year, they’re basically the same team, and they win the division. When you have a Price-caliber goalie, and that’s what Crawford is despite Pierre McGuire forever muddying the perception of him, there’s simply nothing you can do to make up for the loss of him. It’s pretty simple.

2. The lack of a puck-mover

You saw this last night when the Stars went full-Jabba The Hitch in the 3rd. The Hawks didn’t have any answers. They’re not a team built to dump and chase and rugby their way into chances and goals. And that’s fine if you have a quick and creative blue line. The Hawks do not.

Duncan Keith was never PK Subban or Erik Karlsson. Keith’s springing of the offense in the past was his insane ability to create turnovers just ahead of each blue line with a burst of a first step that simply no one else in the league had. He then immediately got the puck up to the forwards with the other team caught in bad positions. He was not a “wheel it out from behind his own net and carry it 160 feet through three guys” guy. It’s why he’s never been a power play QB either. Well, now he doesn’t have that first step, and is still recalibrating his game to that. At times he’s trying to Roger Federer things and try and force even earlier than he did in the past. But that’s often ending in a mess. And he can’t recover like he could.

Beyond that, there’s just no one else. Gustafsson and Forsling were too busy getting buried in their own end to be that guy. Seabrook… well, if he can’t make the pass from his own circles you know how this goes. Kempy is more in the Oduya model in that he can use his wheels to get out of trouble in his own end but is offensively limited. It’s simply not in Murphy’s job description.

So a team can simply stand up at its line, with no fear of being beaten, and force the Hawks to put it in the corners. Which is where…

3. Lack of a forecheck

Here’s the thing. You don’t have to be a really big team to be a good forechecking one. You just have to be quick and determined. The Hawks were never big but could make this work in the past, though it helped that they had Keith or Oduya or a younger Seabrook and Hammer also ready to force things at the blue line as well and squeezing space. They also had Marian Hossa.

Now? Not so much. And I don’t know that it has to be this way. It’s what Saad was supposed to help with. Hinostroza certainly is willing and fast, though maybe just not strong enough. It’s in Duclair too, and he did cause a couple turnovers last night. It’s still supposed to be a Toews specialty. That’s basically someone on every line.

And yet the Hawks remain remarkable easy to break out against, and the defense behind that much easier to get through once teams do. Granted, this is a Hitchcock team and 1-6 the Stars are as solid on defense as you’ll find. But you still have to find a way to even threaten.

I don’t know if they just don’t want to, or they just gave up on weights in the gym or something, but it really shouldn’t look like this. And it shouldn’t look like them trying to come up with Rembrandts at the blue line trying to avoid this and just giving up the puck there instead. When you have a lead against the Hawks, if you just make them go 200 feet there’s nothing they can do. When they can’t play on the rush, they have no answers.

Sadly, the last two things don’t look like they can be fixed in the coming years either, as they are linked. The Hawks don’t have a puck-moving d-man anywhere near ready, unless they plan to toss Jokiharju into the league at 19 (and maybe he could do that but boy is that an ask). Come next October I’d certainly be more than intrigued at what Top Cat, Schmaltz, Hinostroza, Kampf look like with the experience, along with the addition of Sikura and maybe one or two others. But until the Hawks come up with a definitive answer on their blue line, it’s probably all for naught.