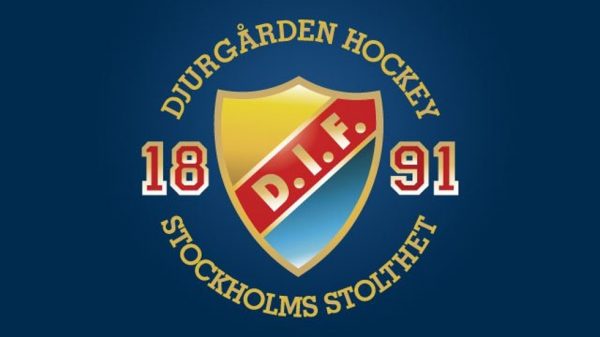 **A break from our regularly scheduled Hawks programming**

Around these parts we all ourselves Real Fans Program, essentially embracing our status as regular-ass people following the team we love and writing what we see from that perspective. This approach has always appealed to me because “fan” is all that I am vis-à-vis my teams (spoiler alert: I never played hockey. @ me from now on if you must). So while gallivanting around Europe recently I was curious what it’s like to be a so-called real fan somewhere else in this world. Fortunately, Stockholm’s SHL team, Djurgårdens (pronounced: YER-garden) was in town when my husband and I were there, so I put on my best anthropologist hat and was DEFINITELY not just looking for a place to drink. Here’s what I found:

In enemy territory. You know how the Predators organ-I-zation gets all butthurt about the number of Hawks fans at their games and they restrict ticket sales to non-Nashville residents? Well, it turns out they’re not alone in this endeavor, but of course because it’s the idiot Predators they do it all wrong. Last Thursday, Djurgårdens played Luleå (pronounced: I have no fucking clue, loo-LEY-ah probably, but I swear these are real words), and all the Luleå fans sat in one section. Actually it was one slice of Hovet arena, a triangle of people from the lower to the upper bowl but in very defined borders.

We didn’t have to specify where we’re from when we bought the tickets (which we actually did have to do for an Italian soccer game earlier in the week, but that’s another story), so I’m not sure if this self-sorting is planned in advance, or if there was information marked on the seating chart, or instructions that we most certainly could not read in Swedish.

Regardless of the process, the result was the concentration of the visitor’s fans in one area, which honestly, if Nashville or some other NHL club were to instigate such a policy, would probably be more fun than sitting with a bunch of random Predators fans.

The opposite of this group was, for lack of a better term, the home team’s super-fans, who were based at the end of the ice (think behind the visitor’s net at the UC, from the 100s to the 300s). Since the visitor’s fans were in one section, by default all the other sections were Djurgårdens fans, but this group at the end of the stadium was the flag-waving, singing, chanting hardcore fans. And these weren’t any three-syllable, easy-singalong chants we’re used to here, such as the ever-pithy “Let’s Go Hawks” as Tommy Hawk wails away on some crappy hand-held drum that looks like a prop from a racially insensitive Western. No—these chants changed cadences, had distinct melodies, and while the fans would repeat a verse for a few minutes, they never repeated the same chant.

When Djurgårdens was on a power play, the song changed. At the start of the second period, it differed from the one at the start of the game. Even goal-celebration songs differed. Djurgårdens scored twice, and after the first goal the song was to the tune of Jingle Bells, I shit you not. After the second goal, though, it was something completely different. And both were a hell of a lot better than stupid-ass Chelsea Dagger but that also is another story.

I don’t speak Swedish (obviously), so the fans very well could have been repeating words and phrases, but the Super Fans moved smoothly from one melody to the next, solely driven by some common understanding of what to do next from the repertoire.

The visitor’s fans, hemmed into their section across the stadium, did the exact same thing, albeit with smaller numbers and slightly fewer flags (holy shit, the flags at these European sports games, why are they so into them?). The result was a reverberation of chants and songs that mirrored the change in momentum on the ice.

Wait for the whistle. My stomping ground at the UC for many years was section 326, and as anyone who’s been up in those rowdy sections knows, you WILL get heckled for walking around during play. At Hovet, however, heckling wasn’t necessary because nobody moved from their seat unless it was intermission. And I mean nobody. A few stragglers came to their seats late, but there was no going to the bathroom, even during the brief TV timeouts when they shoveled the ice (done by dudes, not scantily clad women).

There were no beer runs and no vendors walking around because you could only drink in the two designated bar areas on the concourses. Given the intensity of the fanbases and all those damn flags, maybe restricting alcohol consumption is a good thing, but for me used to my $12 Bud Lights bought at leisure throughout the game it was a catastrophe minor inconvenience. Confused yet compliant, we crammed into the bar area where everyone pounded a beer during intermission, but I couldn’t deny the entire crown had a remarkable attentiveness throughout the actual periods of the play.

Shut up, Lana, what about the game? So what was the actual game like, you say? Well, Djurgårdens’s shitty zone entries reminded me of watching the Hawks, to be honest. They won 2-1, with the game-winning goal kind of a fluky play where the puck dribbled past the goal line under pads. It just proved that teams everywhere need luck as much as they do skill. The pace was extremely fast for both teams, and it was nearly 10 minutes into the first before there was any type of whistle, eventually happening for an icing. The rink was NHL-sized, and although Luleå got a late goal in the 3rd, Djurgårdens held on for the win.

Anything else? The crowd was overwhelmingly male. Like by a 3-1 margin. It was a more skewed sex ratio than you find at an Umphrey’s McGee show. I have no hypothesis for why this was—with what we know about gender equality in Sweden I figured women would be just as interested in a hockey game as men (and I saw plenty of men pushing strollers while I was in Stockholm). It’s not exactly an apples-to-apples comparison, but the aforementioned soccer game in Italy was almost an even mix. Granted, Djurgårdens played on a weeknight and Roma on was a Sunday, so maybe that was a factor? Unfortunately I couldn’t ask any Swedish women without looking like a totally weird foreigner (which I already did).

Oh, and the arena had good pizza, like legitimately good thin crust. So that doughy, uncooked Connie’s crap at the UC can fuck off.

Photo credit: difhockey.se (My pictures from the game were terrible and as much I would like to make you look at my vacation pictures, it’s probably a fire-able offense).