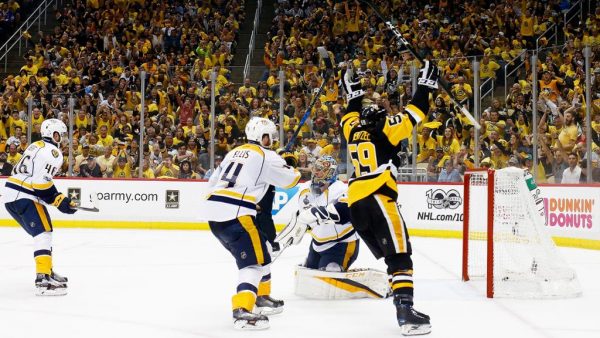 When I said I couldn’t quite get a handle on this series, I wasn’t saying I expected to see the weirdest Final game of my lifetime (and feel free to correct me on this one). We may never see a team that has won three rounds to get here go 37 minutes(!) without a shot again. And we’re even less likely to see any team come close to that and still win. That was an all-timer. But I suppose in a building where less than a week ago an entire crowd was going apeshit over a puck that went on top of the net and not in it, anything is possible.

I actually had some flashbacks to the 2010 series against the Predators watching last night, and even some of the one in ’15. You’ll recall seven years ago in the first three games the Preds simply sat on the boards at the points in the Hawks’ zone, essentially trapping there instead of in the neutral zone. They dared the Hawks to go up the middle or try and find the time for flips out to center, and it took Brian Campbell’s return and a wake-up from Quenneville (and a small, boneheaded play from Martin Erat that I certainly don’t think about every single day) for the Hawks to crack it.

It was some of the same stuff last night.

The Preds wingers and d-men were crunched along the boards, cutting off those fly patterns and contesting the pucks there so that the Penguins couldn’t pop the puck to the middle in time to his a streaking forward or d-man. And without Letang, the Preds were happy to just put the puck behind the Penguins’ net and ask any of the other blue-liners to try and find their way out. Because Trevor Daley has rediscovered the fact that he sucks out loud, this became a huge problem. While Justin Schultz’s game has greatly improved, it’s not his strength to work it out from the end-boards. He set up the winner last night by finally standing up at his line, which is where his best work comes from. Make him turn around and he still struggles.

The Preds forwards are so quick though that they aren’t going to leave the Pens a lot of time to do the things they would probably like to, either quickly move the puck to the middle with one or two passes or just flipping the puck over everyone and hoping someone can Randy Moss it out in the neutral zone for odd-man rushes.

But that doesn’t tell the whole story, does it? This could have been a winning strategy for Game 1 if Pekka Rinne’s greatest strength, his glove, didn’t desert him. Yes, it was a 5-on-3 and yes, it was Evgeni Malkin, but Rinne saw his shot from outside all the way and he just whiffed it. See how one bad goal can change everything? It’s the kind of goal he always used to give up in the playoffs, and one he really hasn’t for the most part this spring. Suddenly the building is rocking and an experienced Penguins team spent the next few minutes pouncing on a Predators team that is on this stage for the first time. Guentzel’s winner was a hell of a shot, but if your’e 6-5 why do you need to carry your glove so low on that?

Still, it felt a bit righteous for all the bitching the Preds and their fans had been doing at the refs. Yeah, the offside review is dumb and needs work. But be better than that. Was the penalty on Neal to go along with the one on Jarnkrok a tad on the soft side? Maybe, but it’s still a penalty and a better question would be to ask Neal just what the fuck he was thinking. And in reality, the Preds responded as you’d want.

It’s left most of the hockey world cursing how “lucky” the Penguins are, and how they seemed charmed, and in some instances some conspiracy by the NHL and NBC to favor them, which I love. Really, the Penguins were only “lucky” against the Capitals, and I don’t know that you can call Fleury playing out of his mind for four or five games luck as that’s actual skill. Craig Anderson drinking virgin’s blood the last two games kept the Penguins from moving on in a pretty routine six games, because they basically murdered the Senators for the last three games.

Still, the weirdness makes this series finely poised as we move along. I’m pretty excited for tomorrow night.