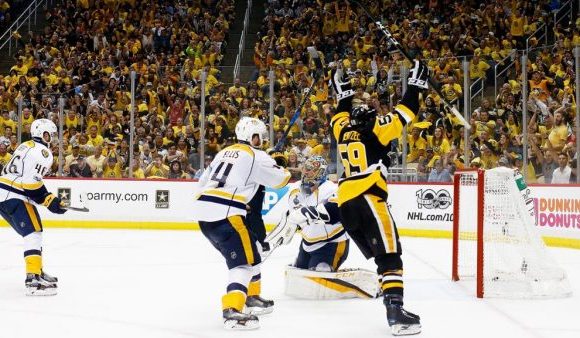 When I said I couldn’t quite get a handle on this series, I wasn’t saying I expected to see the weirdest Final game of my lifetime (and feel free to correct me on this one). We may never see a team that has won three rounds to get here go 37 minutes(!) without a shot again. And we’re even less likely to see any team come close to that and still win. That was an all-timer. But I suppose in a building where less than a week ago an entire crowd was going apeshit over a puck that went on top of the net and not in it, anything is possible.

I actually had some flashbacks to the 2010 series against the Predators watching last night, and even some of the one in ’15. You’ll recall seven years ago in the first three games the Preds simply sat on the boards at the points in the Hawks’ zone, essentially trapping there instead of in the neutral zone. They dared the Hawks to go up the middle or try and find the time for flips out to center, and it took Brian Campbell’s return and a wake-up from Quenneville (and a small, boneheaded play from Martin Erat that I certainly don’t think about every single day) for the Hawks to crack it.

It was some of the same stuff last night.