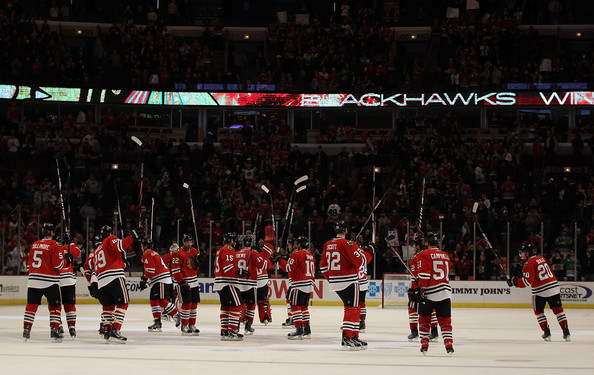 It was five years ago tonight, thought it seems so much longer, and in fact in about an hour and a half it’ll be to the minute when the Blackhawks franchise and fandom was truly reborn. At least it was to me.

If you were there, you remember. It was December 23rd, 2007. It was a bitterly cold Sunday, and the Bears had won a pretty terrible football game earlier in the day, just as they have today. One of those Chicago winter nights where the wind felt like it was tearing off your skin.

The Hawks were hosting the Oilers. The previous night they had beat the defending Eastern Conference champion Ottawa Senators on a Jonathan Toews OT goal, and this was the weekend where it felt like the Hawks were announcing their relevance again.

The actual game doesn’t matter all that much. The Hawks won 3-2 as Brent Seabrook had two goals to cancel out Dustin Penner’s two goals. Patrick Sharp added the middle Hawks goal. It was the usual full house around Christmas, as the Hawks always had good crowds during the holidays, even when they were awful.

But something was different in the UC that night. Maybe it started before. Maybe it started as the place was shaking as Nikolai Khabibulin turned away a furious Oilers flurry in the last minute to preserve the win. Or maybe it was when Martin LaPointe led the Hawks back out from the tunnel for the first salute to the fans after a win.

But you could physically feel a change in the feeling around the Hawks. Sure, Toews and Kane were already turning heads well before this game. The Old Man had kicked it, Rocky had already hired John McDonough, home games were on TV (though sporadically). The shackles were being loosened.

But it was on this night that it felt like the Hawks and their fans broke free from it all. It felt like both sides were ready to come together, to realize that it was different now and it was good to be a Hawks fan again. That curtain call felt like the players and fans melding to once and for all wash away the bitterness and missteps of the past.

I suppose that night is what planted the seed for me to come home and start The Indian. I guess that makes it night that set us all on the path to be here now. It was certainly the night when the Hawks were again part of the Chicago sports scene.

Even with the misery and anger of the current situation, it’s moments and memories like this that #TheThumbDicks And #TheChildren can’t touch. We get to keep these, even if they are never added to.

But I’d like more. You would too. Because nights like December 23rd, 2007 are too valuable to piss away.

Merry Christmas to all of you, from the Triumvirate. Have a happy and safe holiday.