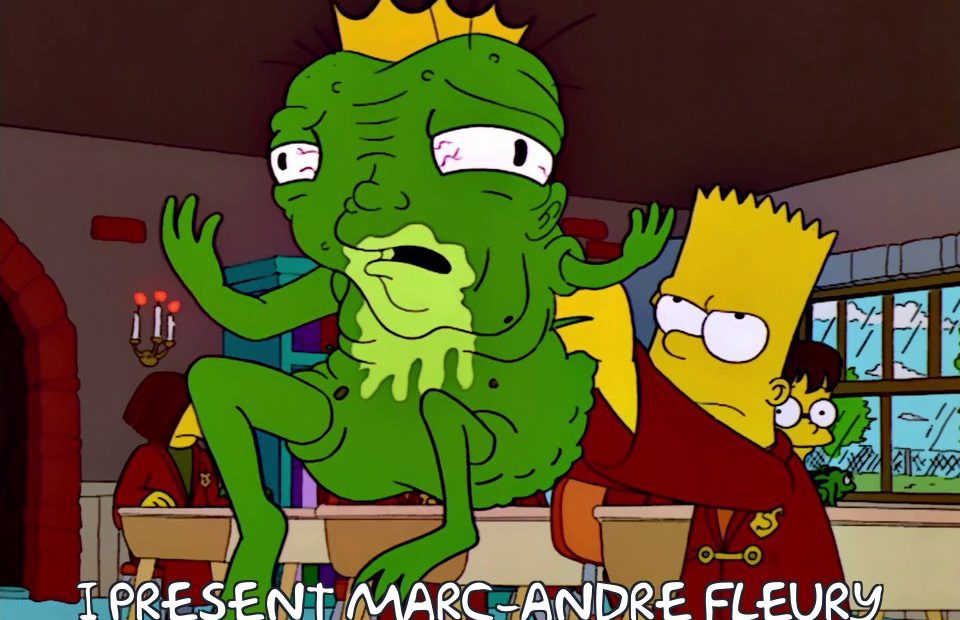 And now we’re on the brink, though everyone already writing the tributes to the Capitals might want to check their history when leading a series 3-1. Even this grouping, for the most part, was around when they blew one of these to the Rangers three years ago in one off those Caps-Rags series we’ve all tried to burn from our collective memories. So yeah, if you love history and gremlins and such, you know this one isn’t over.

As the Caps were laying the wood to the Knights last night, there were far too many top-of-the-profession writers remarking on how the “magic” had run out for the Knights. They’re either willfully trying to push an angle that doesn’t exist, or they’re collectively stupid. Or both, I suppose.

If you watched the last round for the Knights Who Say Nee, even though it ended in five games it was hardly a dominating effort. The Jets ran the show for long stretch of that series, and yet kept running up against a very toothy wall in Marc-Andre Fleury. .950. There’s nothing else to say. There’s no planning or method to defeat a goalie who is throwing a .950 at you. If you can’t really conceive of that, just know with a goalie playing that well it takes 40 shots to find two goals, and even if your goalie is paying really well the other team can probably find two bounces off something for two of their own. At the very worst, Vegas was always gaining a shot at a coin-flip. This is the sport, really.

That’s Fleury’s SV% in this series. And sure, it’s not like the Capitals are just a bunch of escaped wildebeests that got loose or something. Kuznetsov, Ovechkin, Backstrom, Oshie, Carlson, with help from Eller and his ilk, there’s a lot of talent here even if they lost some from previous seasons. But .845 is .845, and you’re going to lose when that happens. The Knights are losing, plain and simple.

Mostly, if you go by the underlying info, the Knights and Caps have been pretty much even, with the Knights just shading it. Some of that is they’ve been chasing the game more than any other series, but the fact that they’re chasing the game is down to Fleury suddenly turning into Tigger as much as anything else. This is still a team that’s basically one line, whatever inflated narrative Eddie and Pierre want to make about Reaves and Nosek on the 4th line, and it’s not really built to come from behind.

Sure, the Caps are fast enough to try and attack the defense of the Knights, which is not gifted with the puck other than Schmidt (and Engelland is AWFUL and the Caps have finally showed that). But the Jets did too, they just didn’t have an answer for the final boss in the crease. He’s basically provided the Caps a cheat code.

-While it’s been easy to discuss how the Knights are made up of players nobody else wanted (which isn’t totally true, I’m sure the Pens would have loved to keep Fleury as a backup, except you don’t pay backups $6 million and Fleury wouldn’t want to be that anyway. James Neal, Schmidt, Theodore, one or two others are players that those teams would have loved to keep but thanks to the expansion and cap rules, they simply couldn’t), the Caps have their fair share of weird pickups.

Oshie was acquired for Troy Brouwer (a deal I actually liked for the Blues at the time, and now Troy Brouwer has turned into a Jalopy). Michal Kempny…well, let’s not do this again. Lars Eller was discarded by two teams who didn’t appreciate him for Jaro Halak and and two 2nd round picks. As strange as it sounds for a 1st round pick, Kuznetsov actually slipped farther than he should have because teams knew he wouldn’t come over from the KHL for a few seasons. Matt Niskanen was allowed to walk from Pittsburgh.

It’s not just the Knights who can profit off the idiocy of others.

-What the Knights also can do like every other team is act like a bunch of asshats when they’re getting their dicks handed to them on the scoreboard. There’s Ryan Reaves doing Reaves things because his team is fucked for the night, which proves exactly nothing.

While Gerard Gallant is going to walk with the Coach Of The Year award, and he should, keep in mind he couldn’t keep his team wrangled in last night when the contest was over and they ended up losing without any class (and don’t fool yourself, there is not such thing as “message sending.” It’s just childish, bad losing). He’s also the coach who in two straight games when his team needed a goal and his net empty put Reaves out as his extra skater because he somehow doofus’d his way into two goals in two games (one a penalty). Even the best at the moment are prone to moments of completely, blithering stupidity.