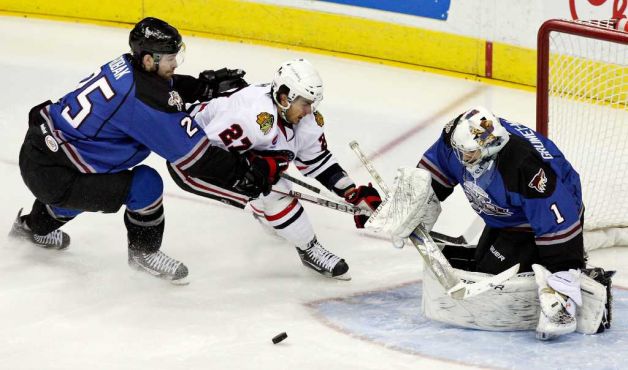 Let’s talk about some things that actually took place over frozen water today. It’ll be a nice break. We’ll start with the Winnebago County Bacon Bits, and then later this afternoon we’ll check up on all the kiddies around the world. Then we’ll realize it’s not really the hockey we want to be talking about, and then I’ll resign myself to watching the fucking Lakers tonight and that I won’t be able to pretend that Steve Nash in Purple and Gold is ok! Sorry, that got away from me there a bit. Anyway…

The IceHogs had one of those lovely three games in three days weekends this past one, with a trip to Grand Rapids sandwiched between two home dates with Florida’s affiliate San Antonio. Sounds brutal, but they got through it with three wins, so you can’t complain too much, can you?

One consistent theme you’ll notice from the Hogs is that they seem to draw a fuckload of penalties. I don’t really know if they’re just playing a bunch of neanderthals all the time or if teams are struggling to deal with their speed or they’re just that annoying or whatever. They take a fair few too, but they’re getting more. Friday saw them get seven power plays. Did they score on any of them? Of course not! This is the Hawks organization, isn’t it? But because of that, the shot-differentials are getting way inflated. A 44-30 advantage makes it look like the Hogs were all over the Rampage on Friday night, but watching the game I don’t know that was the case.

Anyway, Brandon Pirri — who had himself a weekend and I’m told he’s quite handsome — scored the lone goal for Rockford and Hutton stopped 29 of 30 and then everyone in the shootout to give a platform to Kruger and St. Pierre to win it in the home run derby.

The next night saw a truly bonkers game in….central Michigan? I should check a map. Anyway, I know Grand Rapids is in southern Michigan and I know I don’t ever want to be in Grand Rapids. The Hogs only had four power plays but coughed up six and conceded scores on three of those. So yea, kind of ugly. The penalty kill started well this year, but hasn’t been quite so lockdown recently. The Hogs trailed by two goals twice, and then in the 3rd surrendered the lead twice. Six different players scored (even Kyle Beach! Scratch my back with a hacksaw!) with Pirri capping it off in OT. Future annoying, overrated Wings Brendan Smith, Gustav Nyquist, and Tomas Tartar (who they’ve been touting for what seems like 17 years now) scored for the Stewie Griffins.

To cap off the weekend, the Hogs returned home to double up on the Rampage (sounds like what I’ve been doing recently). In another penalty filled affair (12 power plays in all), Carter Hutton kind of cruised to 23 saves while St. Pierre took advantage of a terrible San Antonio turnover to net the winner and Clendening got his first professional goal.

That’s four wins in a row for the Hogs, who moved up to second place in the division. I’m not sure I know what that means but I do know it’s better than they were last year.

-It’s hard to ignore Brandon Pirri this weekend. He had five points in the three games and six in his last four. Other than being so bad at faceoffs they’ve stopped letting him take them, he’s been really noticeable. Seems a bit more physical this year.

-Nick Leddy only played Friday before hurting himself and missing the rest of the weekend. Nothing too serious though. Brandon Saad has also apparently been hurt. Or maybe not. No one’s quite sure. But he hasn’t played since the third game of the season. He’s going to be skating this week, so he was probably hurt. I think. Maybe.

-From what action I caught, I like what I saw from Adam Clendening. He was even used to kill penalties and was decent enough with it. Confident, quick, and not afraid to attack. Or basically all the things we want Leddy to be.

-Those of you who follow Chris Block on Twitter we’ll see that Dylan Olsen has taken up residence in the Chateau Bow Wow. That’s encouraging.

-Jimmy Hayes only had the one goal on the weekend, but still looks to be Rockford’s best forward along with Pirri and the kind of adorable St. Pierre.

The Hogs will be on normal TV on Friday as they Wolves head out to Rock Vegas. You can catch it on My50. Even HD! So now fucked internet feeds taken from the scoreboard that switches to a camera in the corner for no apparent reason and stays there while the play moves down to the other end of the ice.