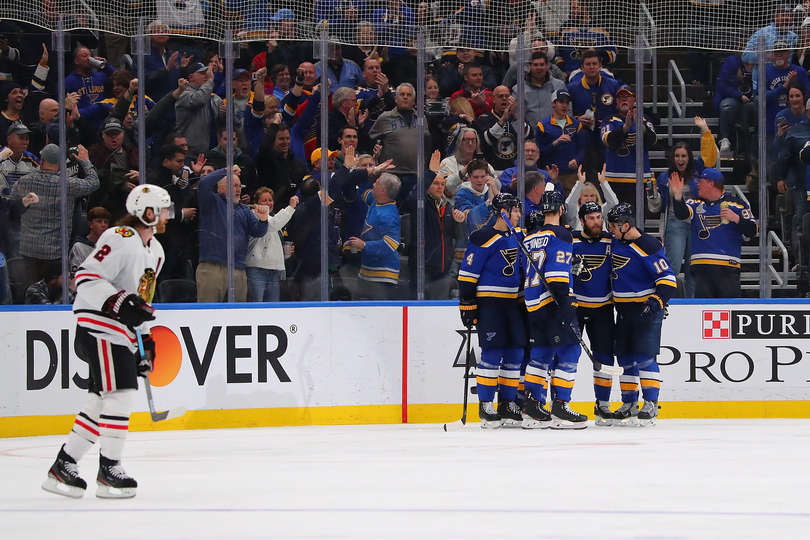 If the remaining 19 games go like this, we can be satisfied. It had all the intensity and anxiety of the conversation you have waiting for the results of a pregnancy test with the ugly but interesting one-night stand whose child you don’t want to birth. It put on full display the potential of the young ones, the awfulness of the old ones brought in, and the never-ending struggle that is being Corey Crawford. It was terrible and beautiful, much like the Gateway to Anywhere Else on the Mississippi, respectively. Let’s dredge it.

– If the Hawks are going to win one more Cup with this Core, Kirby Dach is going to play an outsized role in it. He made three plays in particular that should inspire some confidence in the future of the forward corps.

The most obvious was his patience on the far boards to set up the Hawks’s third power play goal of the game. He took his time scanning his options, then opted for Strome behind the net. Strome took two seconds before firing a perfect pass to Saad in front to give the Hawks their last lead of the game. We continue to be overwhelmed by his vision and passing skills.

Maybe the most inspiring play Dach started was one that didn’t show on the score sheet. After an extended shift, he gathered the puck in his own zone on the far boards and delivered a crisp cross-ice pass to Boqvist. The pass was so good that Boqvist had time to make a stretch pass to a streaking DeBrincat, who janked a pass to Strome. Strome gloved it down and had an A+ chance that he couldn’t convert. And though Strome should be playing center, the idea of a Dach–Boqvist–DeBrincat–Strome connection should make the vas deferens tingle in all of us.

The thing that will determine whether Dach is very good or elite will be whether he can find his finish close in. Yet again, he dropped his shoulder to plow past a defender, but couldn’t finish in front. Still, lots to be excited about from the guy they took instead of Bowan Byram.

– To prove that irony isn’t dead, the power play scored three times, and each of Keith and Murphy scored a goal in the first game after they traded Gustafsson. The beautiful game.

– Though the box score will be all the fodder those dumbass build-the-wall motherfuckers need to open their wrists about the Lehner trade, without Crawford, the Blues score 10 easily. On top of keeping his team in the game after they were wildly outclassed in every way, Crow bounced back from an Alex Steen shoulder skullfuck that went uncalled. Nothing can be easy with the calmest man on skates. The only reason Corey Crawford shouldn’t retire as a Blackhawk is if he tells the organ-I-zation to eat all of his shit at the end of this year.

– Speaking of eating shit, Olli Maatta reassured us that buying him out at the end of the year is the only answer to “What happens to Olli Maatta at the end of this year?” When he wasn’t getting caught chasing forwards to the far boards and leaving the slot wide open—like he did on the Blues’s first goal—he was throwing wild passes to Zach Sanford right in front of Crawford, like he did on their fourth goal. And when that wasn’t enough, he was busy getting ragdolled behind the net, like he was by Ryan O’Reilly leading up to the Blues’s fifth goal.

I don’t ever want to hear “Actually, Olli Maatta hasn’t been that bad” again.

– Nick Seeler slotting in for Lucas Carlsson was a thing that happened because Jeremy Colliton is a stupid asshole who can do no wrong in Bowman’s eyes because he’s the prototypical Company Man. But how can you not make that decision with heady plays like this?

That’s Seeler covering David Perron at the blue line. For some reason. And what do you know? Thomas, who scored an easy goal, was standing right in the spot where Seeler should have been if this team played anything even tangential to defense. But yeah, Colliton’s doing a fantastic job. When you can dress Nick Seeler and play him in this diarrhea-in-reverse system, you just gotta do it.

– Though we would have accepted a Brandon Saad trade if the return were right, tonight gave us all the reason to be glad that didn’t happen. He was all over the ice and noticeable in the best ways, despite getting skulled in possession, much like the rest of his mates.

– Boqvist had a rough game overall, as should be expected when you’re 19, have your coach actively pissing in your ear, and get paired with a defensive luminary like Olli Maatta. But on top of his good stretch pass, he totally horsed Sundqvist to set up the Hawks’s final power play attempt. Watching him move his feet for a change was an oasis, but it’s also another instance in the mounting evidence that Colliton is bridling him, which sort of defeats the purpose of Boqvist at all.

This game was a terrible fucking mess, complete ass cheeks if you will, but at least it was fun. It had everything for every Hawks fan: high scoring for all, good play from the kids for those committed to the long term, and a big fat loss for everyone looking for a tank. In the most galaxy-brained terms possible, this was one of the best games they played all year.

Line of the Night: “He knows how to score.” -Pierre on Top Cat