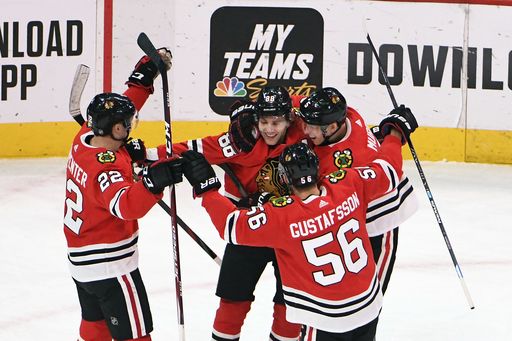 Funny, on a night when the Hawks finally defeated a direct competitor for the playoffs, it won’t even grab the headlines. And maybe that’s the way they want it. They’ll have to do it more than a few more times between here and April, but every journey begins with one step. On the second of a back-to-back, where the Hawks have been strangely dominant, against a Jets team that should give them problems (though they have far more of their own), the Hawks not only got the win but eased to it.

I’m not saying you should get excited, but if you want to start at least inching that way, go right ahead. Maybe the bye comes at the wrong time for them.

Of course, none of this is why it’s a historic night. Let’s get to it.

-The headline will be Patrick Kane reaching 1,000 points, and it should be. I have more than a few tangled thoughts about it, which I’ll get to tomorrow. But we should probably start labeling him, rightly, as the best the organization has ever had. Again, more tomorrow.

-I mentioned in the preview that a big reason that the Hawks have ripped this off is that they’ve settled the bottom of the roster a bit better. Koekkoek and Maatta have gelled on the third pairing, and while neither are world-beaters or even definite NHL players, they’re better options than both Dennis Gilbert or Brent Seabrook right now (sorry, it hurts to say, but it’s true). Both were once again above water in possession tonight, and it’s a bigger deal than you might think to not have to run for the bomb shelter for 12-15 minutes a night when you toss out your third pairing.

To boot tonight, the fourth line came up with two goals, and you’re going to win most times that happens.

-Not a night Keith and Boqvist will want to hang on the wall, as they’re going to struggle with the size the Jets boast. Whatever, they got through it.

-Flip side, Kirby Dach’s line had a great night, capped by Kampf’s goal. Kampf still is wildly a fish out of water playing as a wing on a scoring line but let’s leave that aside for tonight as his goal was the result of what Kirby Dach can be. A 150-foot rush where he looked pretty springy and got to the net and at least caused a rebound. The Hawks have shown the proper patience with Dach even though he hasn’t scored in ages, and you hope tonight’s performance is something he can build on. Certainly fatigue has to be playing a role and the bye will do him good. Wouldn’t mind seeing Caggiula on his line in the future as he’s a puck-retriever who isn’t lost on a scoring line, but that’s another discussion for another time.

-Didn’t notice Patrik Laine until the goalie was pulled. It seems the Jets have done and are doing just about everything they can to bend the team around him, and he’s still giving second-line production. The dude might just be a passenger. Wouldn’t be shocked to hear trade rumors this summer.

-Also their defense blows, and if you miss Tucker Poolman or an aged and swelling Byfuglien that much I can’t help you.

-It would be easy to go pessimistic about this streak–pointing out that the Leafs were about to be on their bye, or that the Ducks, Habs, and Sens suck out loud, or that the Jets are a mess–but these were five games the Hawks had to have. And they got them. They’re still three points out, but now have no other teams to leap. They probably have to play at this pace for a long while to stay in it. But you have to believe there will be a Top Cat binge somewhere around here. And probably the power play will have a good few weeks just because. The goalies will always provide a high floor. And while I’d still bet the Knights and likely the Preds to eventually  zoom up the standings, i wouldn’t count on any of the Yotes or Oilers or Canucks to get too far away from the Hawks either.

Basically it’s not going to take acts of God to keep the Hawks at least in it until the end of the season. And hey, it’s more fun and interesting when there’s something riding on the games. So let’s have some fun.