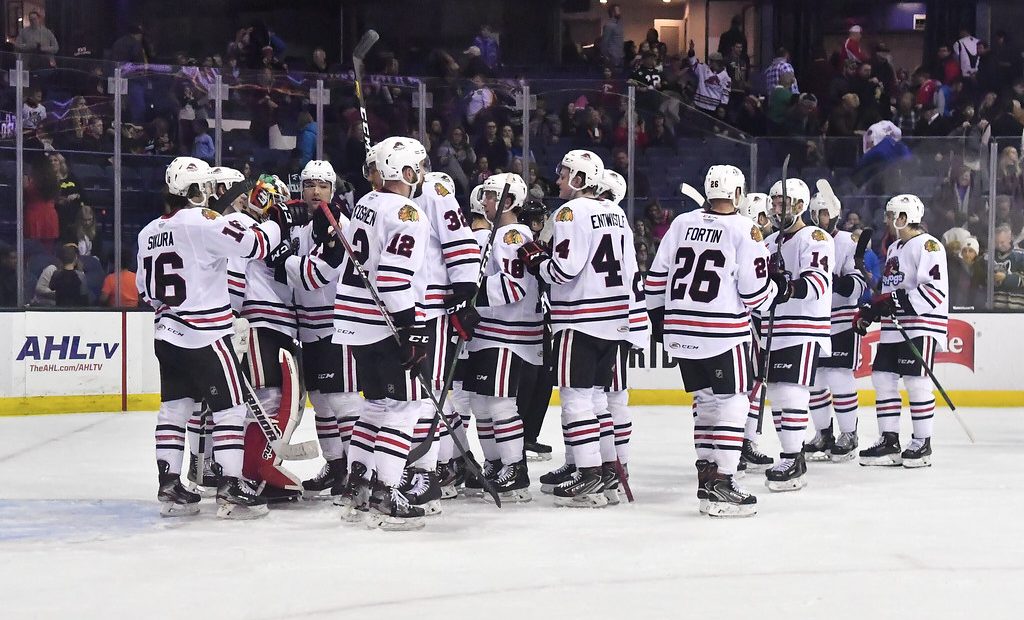 The Rockford IceHogs have seen the midpoint of the 2019-20 season come and go. It has been an up and down campaign for the piglets. A young bunch of Hawks prospects gelled early in the season and was playing well in the first three months.

The IceHogs have struggled as the calendar turned, going 3-4-1-1 in January after dropping their final four games in December. In the nine games this month, Rockford has managed just 1.56 goals per contest.

With no fortification from above on the immediate horizon, the IceHogs signed a slew of players to tryout agreements. Three of the ECHL’s top point-producers, Spencer Watson (January 5), Peter Quenneville (January 11) and Gabriel Gagne (January 18), all inked PTOs with Rockford. The Hogs signed Joshua Winquist to a PTO on January 6, releasing him from the deal after three games of action.

Watson skated five games for Rockford before an injury. Gagne made an immediate impact with a goal and an assist in Sunday’s 2-0 win over the Chicago Wolves. Quenneville has appeared in four games since coming aboard.

The list of injured players is lengthy. Rockford has had to skate with just 11 forwards on numerous occasions over the last few weeks. With John Quenneville, Dylan Sikura and now Brandon Hagel returning to the Hogs after stints in Chicago, perhaps better times are coming.

Rockford is still in the hunt for a playoff berth 41 games into the season. They are fifth in the Central Division with a .512 points percentage.  After Milwaukee and Iowa, any of the six remaining Central teams could surge into the third and fourth-place positions.

Here’s a look at how things stand in Winnebago County, starting with the infirmary…I mean, the forwards.

Tyler Sikura has been the constant in the IceHogs lineup. The captain is Rockford’s top scorer, with 24 points (11 G, 13 A). He also leads the team with a plus-eight skater rating.

Both John Quenneville (8 G, 7 A) and Dylan Sikura (9 G, 8 A) were a big part of the Hogs early season success. Jacob Nilsson (6 G, 12 A) has also been a steady presence in the lineup. Like Sikura the Elder, Nilsson has been on the ice for all 41 of Rockford’s games.

Brandon Hagel (13 G, 8 A) was easily the club’s top-performing rookie over the first half. He was recalled by the Blackhawks this past week but has been reassigned without taking part in a game. MacKenzie Entwistle (7 G, 10 A) has been one of the Hogs bright spots this month, showing game at both ends of the ice.

Just as Phillipp Kurashev was beginning to heat up in his rookie season, he suffered a concussion in Manitoba on December 29. He hasn’t played since. Rookie Tim Soderlund has been out of the lineup since January 3. Mikael Hakkarainen missed most of the first three months with an injury. He played seven games for Rockford before a January 5 injury shelved him again.

Anton Wedin, another solid two-way player for the IceHogs, last played on December 31. Matthew Thompson, who was recalled from Indy to help fill out the roster, promptly was injured January 3. Alexandre Fortin has been on the shelf a couple of times this season but has been back in the lineup this past week.

Joseph Cramarossa, who has three goals and six helpers in 26 games since arriving via trade in November, has provided experience and stability on the Hogs bottom six. His shootout tally gave Rockford a big win in Grand Rapids on Thursday night. AHL contract Nick Moutrey (4 G, 3 A) has also played well in a fourth-line role.

Philip Holm, Rockford’s best defenseman of the first three months, opted out of his contract to play in Europe. This has left a void on the back end.

Nicolas Beaudin (2 G, 8 A) hasn’t been spectacular in his first 38 games as a pro. I haven’t been enamored by his hockey sense like others have been. He’s had his share of rookie gaffes and his passing hasn’t been as sharp as you’d like to see. That said, he is showing some improvement and should get lots of opportunity to refine his game in the next few months.

Lucas Carlsson has been the Hogs most noticeable performer aside from Holm. With four goals and a dozen assists, Carlsson has also shown some quality puck-handling skills. His plus-six rating is tops among the defense.

I thought Chad Krys (1 G, 4 A) would have a bit more impact on the scoreboard than he has. Krys did pick up his first AHL goal in Thursday’s win over Grand Rapids. Joni Tuulola (2 G, 3 A) has probably been as steady from a defensive standpoint as anyone the fist half.

Ian McCoshen joined the team after the Hawks traded Alexi Saarela to Florida back in October. He has contributed some snarl to the blueline, along with some dumb penalties and six helpers since his arrival in Rockford.

Ben Youds is in Rockford on a PTO. He’s been a regular in the lineup since signing on December 9, even skating as a forward for coach Derek King when things got too thin up front. Dmitri Osipov was recalled from Indy December 7 and has provided solid minutes.

On Sunday, the Blackhawks reassigned Dennis Gilbert to Rockford. This move gives the Hogs another player who can help their cause. Gilbert played 20 games in Chicago with a goal and two assists. The big defenseman has just 11 games with the IceHogs this season.

IceHogs net-minders have a combined goals against average of 2.87 and a .908 save percentage. By and large, this has been the strength of the team. The three goalies have faced a lot of high-percentage shots and kept Rockford in a lot of games.

Matt Tomkins has made a case for an NHL entry deal, posting a 5-3 record with a team-low 2.62 GAA. He also helped Team Canada win the Spengler Cup.

After struggling mightily in the first two months, Collin Delia found himself out of the mix for a couple weeks in November. Since December 3, the Cucamonga Kid has been stellar, going 6-3 with a 1.59 GAA and a .949 save percentage.

Kevin Lankinen is Rockford’s lone All-Star selection, though his has had some struggles over the last few weeks. Currently, Lankinen sports a 3.03 GAA to go with a .908 save percentage.

Collectively, this three-way in goal has been pretty good for Rockford. Again, they have fended off pressure from opponents on a nightly basis and is a big reason the Hogs have been competitive.

…and a solid one at that. This team is primarily comprised of greenhorns. Healthy or not, the Hogs have played hard. When healthy, Rockford has shown that they can play with the best teams in the Central Division. Even as crushing as the injury situation has been, the 20-19-1-1 record is very respectable and has the IceHogs in playoff contention.

The key, of course, is how the roster evolves in the next couple of months. Getting players like Wedin, Kurashev and Soderlund upgrades the Hogs nearly as much as getting Quenneville and Sikura back.

Maybe some veteran depth is provided for Rockford in a trade down the line. Perhaps not. The IceHogs sure could use some experienced scoring types in the final months of the season. However, a healthy batch of piglets could make things interesting down the stretch.

Back To The Grind

This week is another busy stretch for the IceHogs. Monday afternoon sees them playing Belleville at the BMO Harris Bank Center. On Wednesday, they host Texas. A home-and-home with the division-leading Admirals is on the docket for the weekend. Friday’s tilt is in Milwaukee; the teams are in Rockford Saturday night.