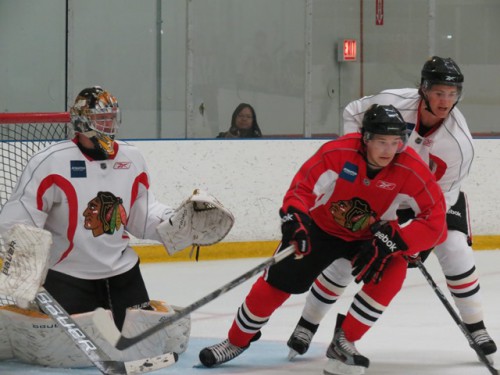 Lines and D pairs for both teams were never consistent—which makes sense since this is only a scrimmage at a camp. But, here’s how the line-ups looked for the most part. Italicized names indicate the starters.

Today’s scrimmage started out with a bang—and not a good one. Within the first couple of shifts, center—and Rockford IceHogs signee—Pat Mullane collided with defenseman Dillon Fournier just over their own blue line. Both players went down hard, but Mullane got the worst of the collision. He went back to the bench, and skated gingerly around at the next stoppage of play, but ultimately left the bench for the dressing room and never returned to the scrimmage. Hopefully it’s nothing too severe—and for the Hogs’ sake, hopefully it’s nothing that would keep him out of training camp come late September.

The White team had their first chance on the man advantage as left winger Garrett Thompson sat for a minute (yes, the penalties are only a minute in camp) for tripping. White threw out a unit of Tyler Motte – Garret Ross – Chris Calnan, Travis Brown – Stephen Johns while Red countered with Dario Simion, Alex Broadhurst, Justin Holl and Robin Norell on the penalty kill. Nothing exciting happened during the man advantage and it expired.

Anthony Louis had a chance for White in the first period as he got in front of the Red defense and tried going five-hole on Matt Tomkins with a backhanded shot, but the 6-foot-2, 190 pound netminder shut the door. The first twenty minutes came to a close with the teams in a scoreless tie; a lot of time was spent in Red’s zone.

At 5:49, the Swedish defenseman who the Hawks took in the 7th round (211th overall), Robin Press, opened up the scoring for White after he grabbed a rebound and fired it blocker side on Tomkins.

Red got their first power play opportunity at 7:54 of the middle frame as defenseman Dan Weissenhofer took a seat for tripping. Red put out John Hayden – Phillip Danault – New Guy Christensen, Justin Holl – Robin Norell for the man advantage and White put Ross, Calnan, Johns and Brown on the kill. 11 seconds or so after the power play expired, Hayden tied the scrimmage up at 1 for Red. The teams both made goalie changes at the next stoppage of play 41 seconds later; Jackson Whistle replaced Brandon Whitney in net for White and Matthew O’Connor replaced Tomkins for red. Both Whitney and Tomkins made solid saves during their time in net and looked very good. It’s almost a shame that they had to be pulled to split time as evenly as possible.

At 14:51 of the period, defenseman Justin Holl scored for Red to put them up 2-1 after a big hit between two players in the left circle. At 16:13, Louis dazzled all spectators with his moves as he slipped around all Red defensive coverage down low and lifted a backhander over O’Connor to tie the game at 2.

Winnetka native Tim O’Brien had a good scoring chance in the waning minutes of the period when he kicked on the afterburners as he led a rush into the zone and let a good shot go from the right circle, but he drew iron.

The third period scoring started early as Christensen put home a loose puck for the Red team at 2:29 to give them a 3-2 lead. Center Phillip Danault joined the offensive party as he banged home a Quinn Gould rebound to make it 4-2 Red at 5:40. Red kept the heat on White on the scoreboard later in the period. Hayden tapped home a loose puck in the crease with 6:26 remaining in the period to make it 5-2. The tide changed a little with 3:35 remaining as Grayson Downing also tapped a loose puck in the crease into the back of the net for White to make it 5-3; the original shot had hit the post. With about 3 minutes left, Whistle was pulled for the extra attacker. Alex Broadhurst had a chance for an empty net goal during this time for Red, but his shot rang off the crossbar. White came to within one goal as Chris McCarthy’s shot from the top of the left circle found its way past O’Connor with 25.4 seconds left, but Red was able to hang on for the 5-4 victory.

–John Hayden was absolutely on fire today—and not just because of his two goals, which were both nice ones. He did just about everything out there. He was physical and got his nose dirty. He was strong on his skates and got in front of some shots. He went to the front of the net whenever he could and his compete level is insanely high. Hawks fans should be excited about their 3rd round (74th overall) pick in this year’s draft. He’s going to be fun to watch in these next two scrimmages and in years to come.

–Tyler Motte, the Hawks’ 4th round (121st overall) pick in this year’s draft, had himself a solid game. He played very well defensively and the centerman has a pretty heavy shot.

–Stephen Johns is so noticeable on the ice, and it’s not just because he is 6-foot-4 and 220 pounds. He’s very sound defensively and very aware of his surroundings. His strength is incredible, which makes his hits explosive. He had at least 3 big hits in today’s scrimmage. At least. It probably sounds like a broken record by now, but this guy is good. Very good.

–Mark McNeill isn’t a flashy player, but he is very sound defensively, on and off the puck. He has great vision and hockey sense and is very strong on his skates. He also does almost everything with his head up, whereas many guys at this age/stage in their careers tend to look down at the puck a lot.

–Anthony Louis may not be the biggest guy on the planet as he only stands at 5-foot-7 and weighs in at 145 pounds, but he’s a very good hockey player. Despite his size, he was in a lot of prime scoring areas today and was heavily involved in plays. He’s sneaky and can cut through the defense pretty well to get himself in position for a good scoring chance. His speed is outstanding and he can handle the puck very well.

–Dan Weissenhofer picked up his physical play from Day 1 of camp and made some nice hits. He had a solid day; he didn’t stand out for any particular thing, but he never really made any mistakes.

–Phillip Danault was all over the place today, which is normal for him. Since seeing him last in Rockford, he almost looks like he got faster, if that’s possible. He drove to the net on almost every shift and was great defensively. He’s strong on his skates and his work ethic/compete level is just crazy high. He’s also pretty good along the boards when he’s digging for pucks.

–Alex Broadhurst didn’t do anything flashy today—aside from that crossbar—but he had a solid day in all three zones.

–Garret Ross was back in action after missing yesterday’s practice. The Dearborn Heights, Michigan native is always around the net, looking for second opportunities to put home.

-It was stated earlier in the post, but it’s going to be stated again:  Brandon Whitney and Matt Tomkins had really good games in net.

-IceHogs head coach Ted Dent was behind Red’s bench in the scrimmage today.

-Overall, this scrimmage had a very high tempo and was a very physical game. It was a lot of fun to watch from the stands.

-Tomorrow, Team B (the Red team) is scheduled to take the ice for practice at 10:00 a.m. at Johnny’s. The scrimmage is slated to start at 11:30 a.m. I’ll have all your updates on Twitter again.