You’re Living All Over Me – Previewing The Bruins Forwards 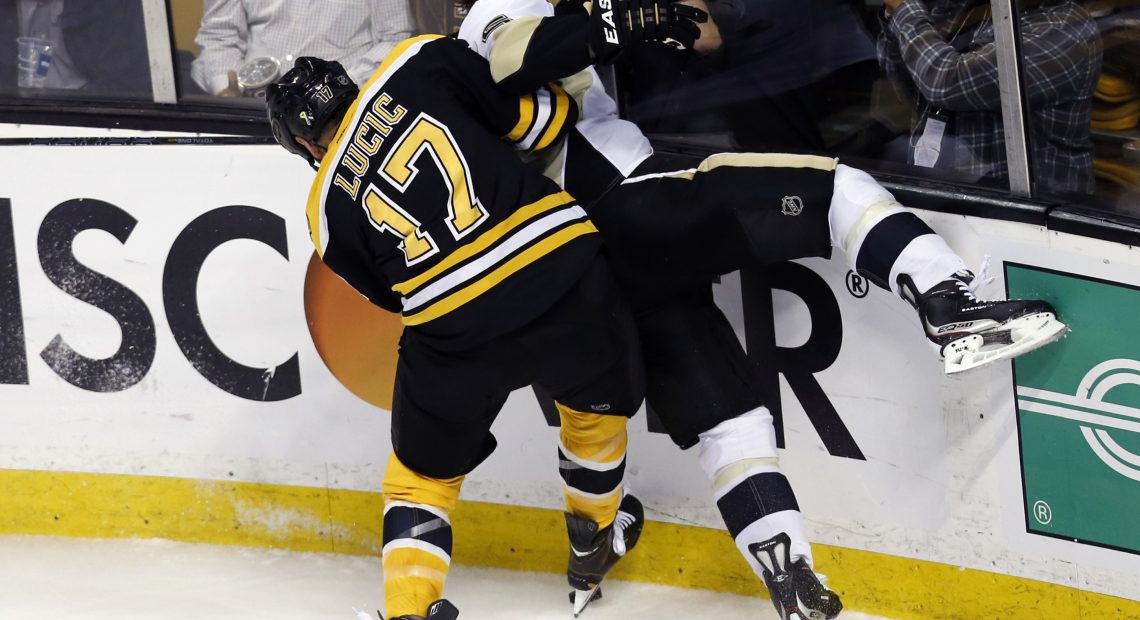 After dispatching the defending champion Kings on Saturday, the Hawks’ attention now turns east, where they will now take on the other most recent champion in the Boston Bruins in the Stanley Cup Final.

There were many concerns about the Kings’ size and forechecking ability against the Hawk defensive corps, but those now seem quite trivial when looking at the team that perfected what the Kings did the year before, and are replicating it this post season with even more offensive flair. The Bruins forwards are large, angry, fast, and unlike the Kings, can finish and have been doing so with ease and frequency.

In looking at the Bruins forwards, they lined up as follows in the Game 4 clincher against the Penguins, their first game in the absence of fourth line stalwart Gregory Campbell, who now famously broke his leg blocking a shot in Game 3.

There’s no way to mince words, the top line of Lucic, Krejci, and Horton has absolutely been mauling their competition in the east to this point. Krejci and Horton are 1 and 2 in scoring these playoffs with 21 (9G, 12A) and 17 (7G, 10A) points respectively, and Lucic has 13 with 3 goals and 10 assists. Those three are your league leaders in plus-minus as well, with Horton a ridiculous +21, and Krejci and Lucic at +14 and +13 at numbers two and three.

It’s easily concluded that those numbers are so skewed due to the line (and the Bruins as a whole) scoring mostly at even strength as a result of an inept power play (what’s that like?). The line has accounted for 38% of the goals scored by the Bruins so far, and as a team they’re scoring 3.13 goals per game, good for second only behind Pittsburgh, but is actually a step down from their 2011 run of 3.24 goals per.

Krejci is only winning about 46% of his draws, but because he has two slobbering hell hounds in Lucic and Horton to go and get the puck back after it’s lost, it clearly hasn’t impeded their scoring, and getting to start 53.1% of his draws in the offensive zone helps. So does shooting 21.4% while maintaining a Corsi per-60 of only +3.58. Conversely, Nathan Horton is shooting 22.6% with a Corsi of +16.46, which suggests that there is far less luck involved with his scoring rate as opposed to Krejci’s. That’s not to say Krejci isn’t an actual threat. He has slick hands in traffic and a quick release on his shot, so the Hawks can ill afford to give him much time and space. But that’s just what Horton and Lucic are built to do, and are doing it very well.

The B’s second line features defending Selke Trophy winner and current nominee Patrice Bergeron at center, and he’s the real linchpin of what makes the Bruins so dangerous. An ace at the dot at 61.4%, as well as an unshakeable shadow on defense with a flair for the dramatic on offense, he’s the heart and soul of the Bruins’ attack. He’s flanked by liteteral dickhead Brad Marchand and Jaromir Jagr and his Depends. No one on this line has a Corsi per 60 of less than 20, which is a function of the line always having the puck. And on top of that, Bergeron kept Sidney Crosby without a single solitary point in four games while tasked with covering him defensively. In short, this line is what poses the biggest problem for the Hawks.

The third and fourth lines for the Bruins are in somewhat of a state of flux in Gregory Campbell’s absence. It’s forced Rich Peverley back to center, and moved Chris Kelly down between Daniel Paille and Shawn Thornton. Kelly’s game mimick’s Campbell’s a bit more, and Kelly is even markedly better at the dot than Campbell (59% to 52%). Paille is one of the finest bottom six pursuit artists in the league, and Shawn Thornton is a fourth line plug idealized. This line should not miss a beat.

However it’s the third line that it’s a bit of a conundrum at this point. Peverley moonlights between center and wing with his playmaking ability, though he also is winning 64% of his 118 draws taking this spring. But he and linemate Tyler Seguin are the only two Bruins regulars carrying minuses at -4 and -1 respectively. This is the only Bruins line without any aspect of punishing physicality, and opponents have tried to pick their spots here to take advantage. They’re both still above water in chances, but their defensive coverage lacks. Kaspars Daugavins has shown a little flash in his opportunities in the lineup, but he doesn’t give the line the one aspect they’re lacking.

Moreso than any other series, matchups are going to be absolutely paramount for the Hawks, especially when they can get them at home. Because the Bruins are aces on draws other than Krejci, where Q chooses to deploy Toews will be key. Will he send him out against Krejci to gain the one advantage at the dot that he has, or will he toss him out against Bergeron to keep the other lines from getting killed in that department?

The best guess here is that Toews and Bergeron will engage in a staredown pretty much the entire series to mitigate the advantage Bergeron has at the faceoff circle over every other line, as well as take advantage of Jagr’s lack of speed on the back check. Look in that case for Handzus to get the first crack at the Krejci line where Zus might hold a slight edge at the dot, and Sharp and Hossa are more than defensively responsible and fleet enough to at least contain them more than they have been thus far if not totally neutralize them.

Either way, assigning the Krejci line to Keith and Seabrook seems like the obvious choice, as they’re the two most equipped to handle the physicality of Lucic and Horton’s forecheck. And Keith’s speed and Seabrook’s outlet passing ability (when it’s not covered in barbecue sauce) might just serve well in counter-punching that outfit before Looch and Horton even get there. Because while both are large and angry, they’re not exactly speedsters out there. Both Hjalmarsson and Oduya have both gotten itchy and twitchy under the duress that those two would present, so they’re likely better served staring down the Bergeron line where there’s only one real puck pursuer in Marchand, with all of his sideshow weasel antics. Jagr is built to have the puck and not to chase it down, and Bergeron’s game is position not unilateral pressure, so there might be more time for the Swedes to collect themselves before turning the other way. And Dainel Paille will certainly make life unpleasant for Michal Rozsival and Nick Leddy, who would be well served to use one another as release valves under his forecheck.

While it certainly looks daunting at the outset of things, the Hawks do hold an advantage in speed between the two groups of forwards, if less of one than they did over the Kings. But there are spots to be picked here, Quenneville just has to recognize them when they present themselves.