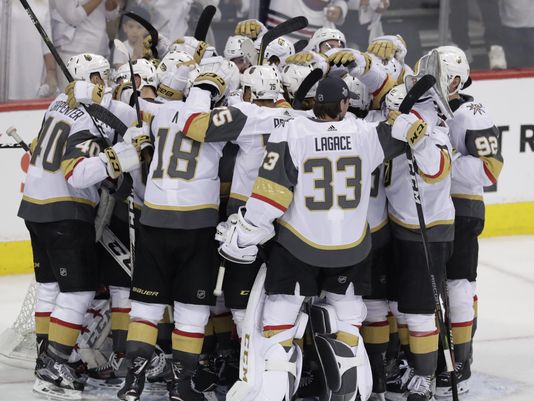 I know. I’m the piss on everyone’s chips. This might start out like that, but I promise not all of this article is going to be that. Swear to God. Not even sure I totally believe it, but it’s the truth. Anyway, with Vegas winning the Western Conference yesterday, all the debate and arguments over what it means about the state of the league, the state of mind of some fans, and a bunch of other stuff that happens when something this unique takes place has basically exploded. Let’s sift through it.

There certainly are a lot of annoying aspects to the Knights, and I feel like I covered most of them here. But that post probably needs updating, and it also skipped a very large, perhaps most-annoying aspect that’s come along with them. This idea that the Knights’ run has somehow “healed” Vegas after the atrocity right before the season. That’s patently ridiculous, cheap, and manipulative, and a few other adjectives as well. This is always a safe-haven  sportswriters run for in times like this, either for easy heart-string pulling or they simply don’t have the capacity to deal with real-life disasters/horror in any real way.

I certainly don’t want to discount that those connected to those killed that night might have found some distraction in the Knights. If they could provide those people with any amount of time of levity, happiness, joy, then that is indeed a wonderful thing. But it’s not “healing.” Those deaths were senseless, and merely serve as a testament to our country’s demented priorities and broken political system.

You know what might “heal?” Meaningful gun control and mental health care expansion in the name of those who passed to assure something like that never happens again. That would mean those deaths weren’t empty or meaningless. A hockey team winning a few playoff rounds do not. And yet you constantly see this listed right next to Fleury’s .947 SV% as a reason the Knights are going to the Final. That’s abhorrent and wrong. It’s also too convenient. So does that mean the Panthers are moral failures because they didn’t make the playoffs after Parkland?  Or various other teams in various other locations of our sickeningly frequent other shootings and mass murder?

It’s a story, but it’s separate to the Knights success and should be treated as such. Yes, I have frequently written about the sports mattering and the connection to those we’ve lost. I wrote a whole book about it, in fact. But after the celebrations and the memories, those people are still gone, and the grieving and processing and healing–if such a thing is even possible–takes place within and away from arenas and stadiums. Secondly, while I wrote about the Cubs World Series win and what it meant to me because of my family, the Cubs were something we actively shared together for my entire life. The Knights didn’t exist before this, so there isn’t that connection for anyone there. Again, if any of those who survived or those connected to those who didn’t could find momentary distraction from the Knights, that’s great. But it’s not the overarching cure-all that every sportswriter is desperate to be, and all those who are desperate for it to be so we won’t talk about some real changes.

That doesn’t mean sports can’t affect things in the rest of the world. Didier Drogba stopped a civil war, for christ’s sake! Colin Kaepernick was able to keep a critically important issue in the public eye without even playing, while also exposing just how deep and cancerous racism is in our country. You may say you knew all along, but I guarantee there are plenty who didn’t realize how deep the problem went and had their eyes opened. They just don’t yell as loud as though who wanted Kap to just go away. It can be done, but it’s extraordinary circumstances like that.

Ok, now that that’s out of the way, let’s talk about the hockey aspect.

Admittedly, this is one of perspective. If the Hawks hadn’t won three Cups recently, I’d probably be livid right now. You get the frustration from some fanbases, but it’s misplaced. Just because your team has been moronically run for decades doesn’t mean everyone else’s has to be. Try and explain “mandatory suffering” to a Yankees fan. It doesn’t have to be that way. Sure, it seems unfair, but it’s not. Something is only “unfair” if you were promised a certain system or process. Sports is not that. You are not guaranteed a win, otherwise what would be the point? It just so happens hockey has a ton of teams that have been run by the stupid, drunk, bewildered or some combination thereof for far longer than any reasonable league should. And because of its lack of attention and/or its stone-resistance to any sort of change, it remains that way. Why are ex-players still getting GM jobs when every other sport has moved on to executive types for that job? Does anyone care Theo Epstein never played the game? The GM of the Warriors never played in the NBA, and that’s the best team of all-time (come at me).

That discussion also goes to age. A 25-year-old Patriots fan would know no suffering. A 40-year-old one would and could regale you with stories of sitting on a cold and uncomfortable bench in Foxboro watching Steve Grogan thrash about (I’ve been through this story). So that doesn’t hold up.

What I think it points at is just how stupid and backward this league is, at least to some people. And yet some of these decisions that landed players in Vegas aren’t as indefensible as it seems. Sure, Dale Tallon should be barred from ever working in the league again, and has basically proven that he got lucky with a few draft picks and was just conscious enough to not fuck up two top-three picks. We’ll circle back to this. Nate Schmidt was a third-pairing player in DC. And rightly so. William Karlsson had done nothing on two teams. The Ducks had three or four young defensemen ahead of Shea Theodore. The Penguins had a better, younger, cheaper goalie than Fleury. Alex Tuch wasn’t going to change the fortunes of the Wild anytime soon. James Neal’s departure sure didn’t hurt the Preds much.

And let’s face it, George McPhee isn’t a genius either. We know he’s not an idiot, he built that first wave of Ovie-era Caps teams. But he’s not redefining anything here. Everything just came up Milhouse.

The one thing to remember is above in this post. .947. That’s all you need to know. Without Fleury, the Jets might have swept this series. They certainly win both in Vegas. .947. He was .927 during the season. Again, that’s pretty much it, along with Karlsson’s 25% shooting-percentage. Look at the top-10 starters in SV% this year. All are on playoff teams.

What I think frustrates people is it is a testament to just how watered down the league is in terms of talent. All it takes to be a playoff team is a goalie playing well and two or three guys with a shooting spike. Which makes it seem random, which makes it seem pointless.

And yet…eight of the last nine Cups have been won by three teams. Now, of those eight Cups none of those teams that won had to play the same team twice in the Final. The Pens beat the Wings, Sharks, and Preds. The Hawks the Flyers, Bruins, and Lightning. The Kings the Devils and Rangers. So maybe it is random until it isn’t. I’m not sure what to make of it.

And yet we can’t have it both ways. The salary cap can’t handicap well-built teams while we also lament that no one knows how to build a team. Yet there doesn’t feel like any GM we can safely say knows what he’s doing completely. We’ve been over Tallon, and he constructed most of a team that won three in six. We could have the Stan Bowman argument all day. No one thinks Ken Holland is anywhere near a genius anymore when he can’t spend as much of Mr. I’s money as he wants. Jim Rutherford inherited a pretty great roster and stocked farm-system, and still gave up a 1st-round pick for Ryan Reaves. Lou Lamoriello had Roman Polak on the team. How deep do you want to go?

When it’s like this the answer is almost always in the middle. Yes, there are a lot of dumb GMs but they also have a near-impossible job thanks to the hard cap. And yet even that could be changing. There’s going to be a big bump this summer, bigger than previous seasons, and that could happen a couple more times before another lockout changes the landscape again.

What we can say is that goaltender is the definitive position in the four major sports right now, because of the flattening of talent-bases across the league. People claim quarterback, but he’s only on the field half to three-quarters of the time. Aaron Rodgers is the best I’ve ever seen (come at me), and he’s been to one Super Bowl because the Packers haven’t been able to figure out anything else around him and some bad/hilarious luck. It ain’t his fault. And goaltender will remain that until teams can amass and keep a level of talent overcome that. And even the Jets, who pretty much have, couldn’t do much with Fleury in this way. .947.

It doesn’t always work like this. Jonathan Quick dragged the Kings to a Final in ’12 but the next Kings team was really fast and really good. You can’t say a team has ridden a goalie only since until Fleury now. Murray was very good the past two years, but not other worldly. Crawford was really good in ’13 and when he straightened out in ’15, but he never carried a .940+. This happens every so often.

What we can hope for is that finally, hockey people will learn. Vegas is built on smaller, faster (and even they traded for Reaves). McPhee and Gallant saw the biggest obstacle to scoring was shot-blocking, and set their team to try and score before that could get set up. Gallant deserves praise for getting his team to skate as hard back as the do forward. But we’ve seen that before, too. Bruce Boudreau has made a career of doing that in the regular season, then acts shocked when teams match that effort in the playoffs. But Dubnyk, Andersen, or whichever goof in DC when he was there couldn’t bail him out the way Fleury has this year. This isn’t new.

Still, a league that eschews “harder to play against” for faster and better could be a better product. The Knights are fucking hard to play against and they don’t need Marchand or Wilson-esque bullshit to be so. They’re just always up your ass because they’re fast and work hard. And you can’t score on their goalie right now.

It’s an anomaly. It’s a strange one. It might never happen again. But there are lessons to be learned.