Well Pilgrim, Only After You Eat The Peanuts Outta My… -FFUD’s Player Reviews: The Rest Of The Goofuses And Nincompoops 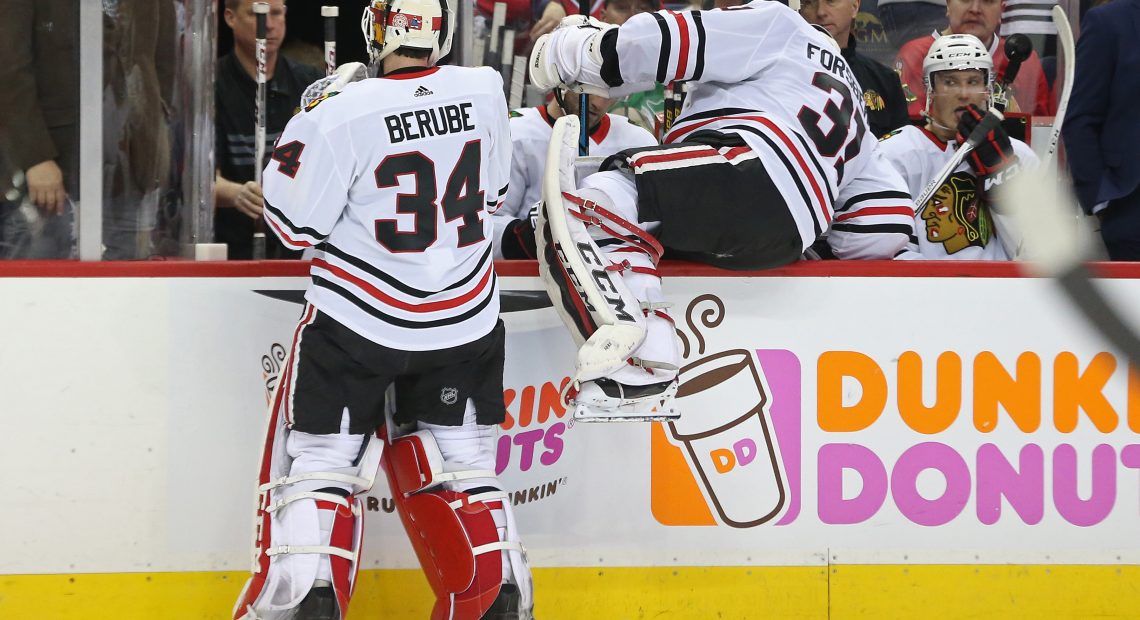 Because we have to, we’ll go through the rest of the goalies who suited up for the Hawks, but altogether because they really were a mishmash of goo that is indiscernible from the next. I’m not sure any of these guys are going to matter ever. Maybe one might. Let’s just get through this and go about our day as if none of this ever happened. It’s pretty much what the Hawks are doing.

We get why Q went to Glass when he did. At the time, his team couldn’t play defense to save their lives (and that never really did change). Anton Forsberg hadn’t grabbed the job with either hand. It was a nice story, and maybe the team would somehow try a little harder or be more aware in their own end with this journeyman punter in the net. Otherwise they’d get embarrassed.

And the thing was, it kind of worked for a game or two. Glass’s rebound control was awful, his positioning not much better, but the team did sorta kinda fight to clear all those rebounds away (so many rebounds…). His first three starts saw a win in Edmonton, an OT loss in Calgary, and a win in New York (Rangers version). Of course, looking over the list of opponents there and things get a little clearer, don’t they? After beating the Jets two starts later (seriously, Jeff Glass got a win over the Jets), he wouldn’t get another win and the team wouldn’t locate a fuck to give again. And that was that.

Glass isn’t an NHL goalie, and isn’t going to become one at 32-33. No, he’s not Tim Thomas, and that might never happen again. I suppose it was worth a shot, and now back to whatever smoke filled backroom he came from.

I think I’m gonna car-ralph reading more of these numbers. Anyway, Berube was brought in for training camp, which means the Hawks thought they might have something to at least look at here. And if you squinted, you could see something of an NHL goalie in Berube. He ended up more square to the shooter than Forsberg or Glass. His rebound control was better. The problem was it took him roughly the same amount of time to move side-to-side as you would age a prime cut of beef. So it doesn’t really matter if you’re square if the puck is already behind you. Berube is 26 so I suppose there’s time for him to establish a career as a backup, but he’s going to have to get way quicker if that’s ever going to happen. We’re almost done I swear.

I’m only throwing him on here because it’s been a while since the Hawks had a goalie in their system a while and brought them through. You’ll recall Niemi was only in Rockford a year. Raanta was straight into the Hawks team. Darling only spent half of a season in Rockford, and not even that. Delia is only 23, will be 24 at the start of next year, and I have this feeling the Hawks are going to give him a lot of time and a lot of chances. Delia’s numbers in Rockford aren’t all the impressive, but then again Rockford isn’t all the impressive (take that in whatever context you want and it’ll still be correct). But he closed the season well, and if he has a strong playoff series or two (assuming he gets the starts) then he could come into camp with a shot at surprising or at least getting the starting job in RockVegas next year all to himself.