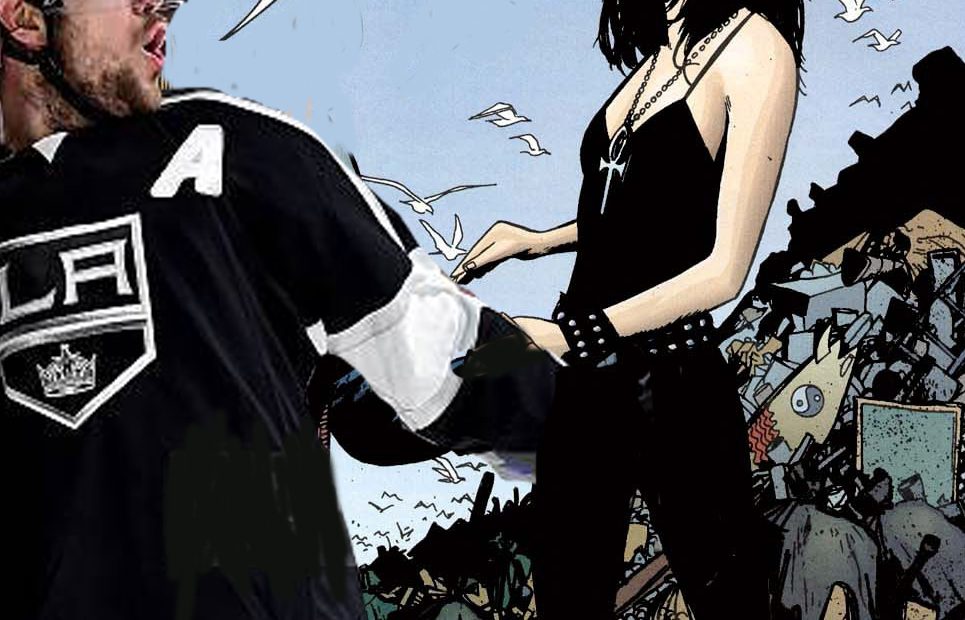 It used to be tradition that playoff exits were complimented by eulogies on Puck Daddy. But with Wysh off in the Connecticut hinterlands and those who remain at Yahoo! being a bunch of Canadian giblets who take things far too seriously (and Lambert being angry and definitely not a Bruins fan), we don’t need them to do what we do best. So fuck it. We’ll eulogize all 15 teams that will eventually fall. And we take unique pleasure in getting to do the Kings first.

Leave it to the Kings to play quite simply the most unwatchable series since the Lockout of  ’04-’05. There are snuff films that have been lighter fare than their four-game outhouse-cleaning loss to the Knights. If they’d offered this as a prop bet it would have been easy money. While they locked Darryl Sutter out of the dressing room multiple times and eventually kicked his muppet-gone-wrong face out because he made them play a style that would have broken Noriega, when the chips were down John Stevens went back to the only thing the Kings know. Dump, crash, rumble, back up, repeat. Except it didn’t work, and the Kings three goals in the whole series pretty much attest to that. But what three goals they were!

What’s infuriating about the Kings is you can find no better example of a team not learning a lesson from its own methods. Better than the Oilers or Flames or even Hawks. While the Kings were able to belch/fart/ralph their way to a Cup in ’12 thanks to a sweetheart draw and Quick’s .946, they won again in 2014 by beating the Hawks at their own game. They were fast. They were creative. They were lethal. They had Kopitar, Gaborik, Carter, Toffoli, Pearson, Williams shotgunning all over the place. Doughty, Muzzin, Martinez, Voynov (blech) were pushing the play from the back to a ridiculous pace. Nothing has ever come close to the sheer madness and coke-binge hockey (maybe literally) that was the ’14 West Final. The Kings got it, and did it better than anyone to win their second in three years.

And then they went back to their covered-in-dung ways, while the rest of the league went about trying to replicate what they had just done. Such brilliant moves as trading for Milan Lucic and/or Dion Phaneuf or Vincent Lecavalier or bringing back Rob Scuderi. It was like Homer telling the car designers “I need an immobile asshole here, here, and here!” The result has been one playoff win since. One.

The Kings are basically the obnoxious frat boy who did well in college with dumb sorority girls who didn’t know better (or were forced not to because all frat boys are rapists, SCIENCE FACT), but then met a wonderful girl right after and suddenly became a really good guy…until dumping her after reading Barfstool or a few months because she didn’t shotgun beers or something. And now they’re just the old guy at the same bar, not realizing it’s all over.

In the end, this is what Kings fans want, because it’ll give them more time to bitch about the individual awards their players won’t win. Not only do Kings fans feel aggrieved that Kopitar or Doughty won’t be taking home hardware, they’ll accuse everyone of lacking moral fiber who doesn’t think they should. I guess we shouldn’t expect anything else from a city that blows itself as hard as LA does about the industry they created and only they really care about. DiCaprio didn’t campaign as hard for “The Revenant” as these dinguses. Last week every writer east of the Mississippi received a tote bag marked “from TheRoyalHalf on behalf of Anze.” Next year everyone get ready for a “Trevor Lewis Should Win The Selke And If You Don’t Vote For Him You Killed Jesus” campaign.

The Hawks window may be over, but it didn’t slam nearly as hard as the Kings did. And no one in LA is going to miss them, because next year the Lakers might win 30 games. Also, Drew Doughty eats the homeless from Skid Row.