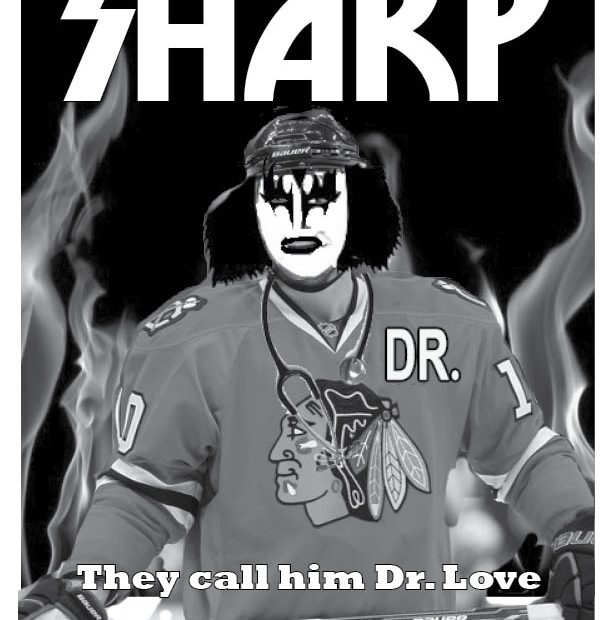 There’s little point in rehashing the details of Patrick Sharp’s farewell tour here. You know how it went, I know how it went, he knows how it went. And really, for the $1 million he was paid and the 4th line role he basically played, it wasn’t a disaster. Maybe his mentoring of Alex DeBrincat will become more important than we can realize here on the outside. Who knows? Sharp came back, it kind of just happened, we all shared our memories of him again (and there are so many), and we’ll all move on.

Still, Sharp’s acquisition raises some discussion about just what the Hawks do in the front office. Because no matter what your conclusion is, none of it makes you feel good about the inner workings of how the Hawks put together a team. So there are three ways this could have happened, right?

One, Stan Bowman saw Sharp decompose in Dallas, along with the hip surgery, and thought he could genuinely help this team. Maybe he figured it was only a million bucks, it was a signing his coach would actually give every chance to which most certainly has not been the case with a lot of signings, and took the plunge. Either way, there were many other fourth liners for even cheaper, and third liners, that the Hawks could have gone out and got and probably would have contributed more. Sharp hardly torpedoed the Hawks season, nor would someone else in that slot have saved it, it’s just somewhere you could have done better.

Two, John McDonough came down and told them they needed to sell more of the new jerseys with the reverse-preacher collar and bringing back ol’ #10 would help them do that. It would continue a pattern for the Hawks of getting the band back together, which has simply never worked in the past. The only “Old Boy” to come back and make any contribution that mattered that I can remember is one Kris Versteeg rush in Game 5 against Tampa that Antoine Vermette scored the winner off of. But McD has got to sell his shirts, he’s got to get his headlines, and he’s got to get pats on the back from the construction workers who yell at him outside his office window (even though that building is done now I assume McD keeps those workers there so he can have a barometer of how he’s doing).

Three, Joel Quenneville is still fuming from the trade of Niklas Hjalmarsson (and he would piss all over all season to the detriment of the team) so Stan and/or McD decide to throw him a bone by bringing back yet another player he once loved. And this has been the thinking in bringing back Versteeg, Ladd, Oduya, and whatever other stiff I can’t remember right now that basically gurgled in place once they returned. Stan recognizes a problem or deficiency on the roster, knows how other acquisitions have gone over with his coach, and resigns himself to bringing back a player at least he knows Q will play. Q’s circle of trust takes eons and miracles to expand, so Stan is restricted to getting players who were already in it and are past it or hoping and praying that a new player can enter within. It only took Connor Murphy 60 games, and he was the Hawks best d-man the whole fucking season.

So either the Hawks’ pro scouting sucks to high heaven (it just might!), the president who doesn’t know shit on shit about hockey is getting to make some calls that don’t have shit on shit to do with hockey, or the coach is still getting to make the call on some toys which quite simply has rarely worked out. Hmm, wanna know how you win three playoff games over three years?

None of this has much to do with Sharp, of course. He was what he was, and it’s not like he didn’t try or didn’t do what he could. And I don’t need to pile on. McClure has written a better eulogy than I could for his Hawks career when he was traded. Hess did it again in our final spotlight for the final game of the season. We had a podcast section about it.

So I’d love to wax poetic about the shorthanded goal in Game 2 against Vancouver in ’10, where he basically just decided he was scoring, but we’ve been there. What I will say is that watching Patrick Sharp’s first few games in red in the first season out of the lockout, it was really the first sign that Tallon and the Hawks got it and were working on something. It was immediately clear Tallon had gotten it wrong out of that lockout, and to him as well. There was no way to see what Sharp would go on to accomplish (unless you were McClure), but you could tell he was intelligent, fast, and there was more skill there than was billed on arrival. And you thought to yourself, “If Tallon can get a few more players like this, nail a couple picks, and have a couple kids develop out of nowhere…” It was a long road to envision, but Sharp helped you finally see it.

Anyway, good luck to Sharp-shooter in whatever’s next. He won’t be a Hall of Famer or anything, but he’ll go down as something of a cult Hawks hero. And that’s more than ok.