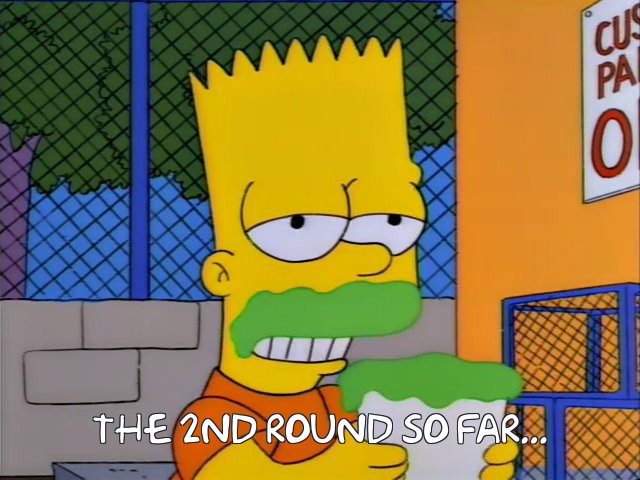 If the first round was some underwhelming appetizer that you had to order because some jackwagon or two at the table insisted and now you’re sharing everything, the 2nd round appears to be the main course you came for. The momentum didn’t stop last night.

Here’s the thing that most of the Bruins apologists–which appears to be an overwhelming majority of hockey media these days–probably won’t tell you quite yet. The Bruins have gotten their ass kicked in the first two games, but because everything went in for the top line in Game 1 this series is split. But once the Bolts were able to get THAT line on a leash, even for just most of the game, look what happens. Even in a 3rd period where they were trailing and really should have been throwing everything including the gas tank at the Bolts, the Bruins managed just a 32.9% share of attempts. That’s a whole lot of not good.

Swingin’ Jon Cooper once again threw Brayden Point, Tyler Johnson, and Ondrej Palat at Bergeron’s line, except this time it worked for the most part. They got the better of the possession, and outscored that top line of Boston two to one at evens. When that happens you can bet the Bruins are going to lose unless Rask goes completely goofy. The encouraging aspect for the Bruins is that they got a dominant game from the DeBrusk-Krejci-Nash line, it just didn’t score (which is kind of a Rick Nash thing and his Game 1 outburst is only meant to infuriate Bruins fans more when he goes the rest of this series without scoring which he absolutely is going to do).

Interested to see where Bruce Cassidy takes this at home. The Lightning top four has slow spots, namely Dan Girardi and Anton Stralman (and Ryan McDonagh isn’t all that quick either) and if the Bruins get the matchups that allow them to press the pace even more it would behoove them. But that leaves their defense more vulnerable, as every time Charlie McAvoy retreats into his own zone…

(C’mon, you knew I’d get to this eventually)

Adam McQuaid got his doors blown off last night to the point that Kansas twisters were like, “Wow, that’s some shit right there!” And Chara wasn’t much better. This series turning up the volume even more would be extremely fun, especially as it could lead to the Bruins getting axed and we’d never complain about anything bad happening to Boston around these parts.

This was a weird one. The Sharks actually were far the better team in the 2nd period…and gave up three goals. They were pretty much kicked around in the final frame…and scored two goals to send it to overtime. The top line did most of the heavy lifting for the Sharks, and the way they got back into it in Game 2 was the rest of the crew helping out Logan Couture. And yet they’d be up 2-1 if not for a ridiculous save by Marc-Andre Fleury, who continues to be a lifeform yet unnamed in these playoffs. That’s how these things go. This series has been more fun to watch than I thought, matching the other three for drama and intrigue. What a trea.