Wear The Grudge Like A Crown: Olympic Quarterfinal Wrap 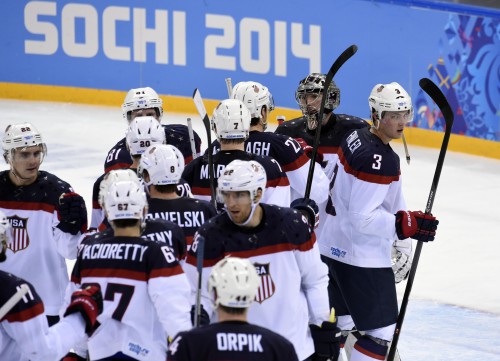 Everything pretty much went to script, and now the Olympics gets the treat of having what are probably the two leading international rivalries in its semifinal. Should make for quite the morning on Friday. Let’s run through the action.

Sweden 5 – Slovenia 0: Took the Swedes longer than I thought and Slovenia actually had a couple chances here or there. Sweden will take heart that they finally got Daniel Sedin off the schneid, but I don’t know if that’s a long term pattern. He hasn’t been all that noticeable the rest of the time. This Swedish defense is playing too well at the moment, and that’s with Alex Edler and his elbows back. By the way, did you notice in their Kronwall hit montage that he left his feet in like 80% of them? Of course you did. But with him on the third pairing and Hjalmarsson and Oduya looking at their best, it really has become an impenetrable force. I do love how they include Johan Franzen on the “Key Injury” list for Sweden, even though Mule hasn’t been useful in at least three years.

Finland 3 – Russia 1: Delicious. I suppose it should have been easier to predict, because somewhere along the line a team was going to completely expose Russia’s blue line. May I present Aaltonen completely waltzing around Nikita Nikitin and Mikael Granlund scorching Slava Voynov in a race (though to be fair to him that was a hand grenade of a puck he had to corral). From there, it wasn’t too hard to foresee that Russia would panic, it’s kind of what they always do. Ilya Kovalchuk looked to bury his stick in anyone’s intestines he could. Malkin and Ovechkin took four minute shifts. Datsyuk faded into the background. And Finland is way too structured and disciplined to try and improvise one-on-one. Pretty easy to say that of the goalies left Rask is probably the best, and that might be enough. But I still wonder about all the people Finland are missing.

Canada 2 – Latvia 1: There was a moment there, wasn’t it? A moment where you thought it could happen? But then you knew after that last Latvian penalty that it probably was over, and it was. Once again Canada needed a goal from its defense, this time Shea Weber blasting one home. I don’t know that too much should be made of it, though God knows the Canadian press will. When playing the teams Canada has played they’re going to face teams packing the neutral zone and only worrying about clearing the crease. It’s only natural that they’ll score with shots that get through or d-men jumping into the play. Though why they need Sharp on the point on the PP when Weber, Doughty, Subban, Pietrangelo, and Bergeron are all on the roster I just can’t tell you. Latvia nearly had another goalie play into a coma after the other one did yesterday, and he probably deserved overtime. Oh well.

USA 5 – Czech Republic 2: This was a game for the brief period when the Yanks stopped getting pucks deep and got Versteeg-cute in the neutral zone. Once they knocked that shit off the Czechs couldn’t handle them below the goal line or in front of the net, and the US ran wild. Kessel, Backes, Parise, and JVR all scored from that area. Those lapses could get punished by better teams, and they won’t be facing an Odrej Pavelec from here on out. But two of the most maligned picks, Brown and Callahan, were among the best players today so that’s a good sign. Will need more from Kane you feel before the weekend is out, but the important games is when he tends to put it on the table.