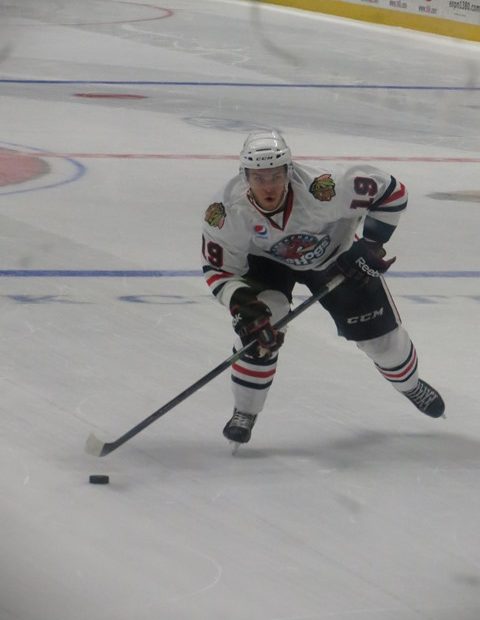 The IceHogs faced off against the Chicago Wolves on Valentine’s Day at the BMO Harris Bank Center. The Hogs got out to a 2-0 lead in the first period courtesy of Jeremy Morin and Klas Dahlbeck, but gave up two goals before the end of the period and one early in the second period to see their lead vanish and be down by a goal. The Hogs stormed back in the third period with tallies from Brandon Pirri and Mark McNeill to take the lead 4-3. The Hogs looked like they were on their way to a victory when the Wolves tied the game up with four seconds left in regulation.

Overtime ensued but neither team scored before the five minute mark, so a shootout was needed to decide the winner. After eight rounds, it was the Wolves who came away victorious.

–Joakim Nordstrom, Brandon Pirri and Terry Broadhurst were the three IceHogs skaters to score in the shootout. Ty Rattie, Sebastian Wannstrom, Mark Mancari and Alexandre Bolduc scored for the Wolves in the skills competition.

-The IceHogs outshot the Wolves 42-37; Kent Simpson was in net for Rockford.

-Forward Brad Mills returned from injury on Friday night. The last game he played for Rockford was on October 23rd in Toronto against the Marlies.

-Defenseman Adam Clendening took a puck to the face during Friday’s contest. Despite the swelling and stitches that resulted from it, he returned and played the rest of the game.

-The scratches for the IceHogs were:  Pierre-Marc Bouchard, Theo Peckham and Wade Brookbank (healthy).

Saturday night’s contest against the Iowa Wild was a bit similar to Friday night’s against the Wolves as the IceHogs grabbed a 2-0 lead by the 1:10 mark of the second period. Pierre-Marc Bouchard tallied in the first period and then Mark McNeill got on the board in the second period for Rockford. Iowa cut their deficit to one but Alex Broadhurst tallied about ten minutes later to restore the Rockford lead.

The Hogs couldn’t hold on to their lead though as Iowa tied the game up before the second intermission. Adam Clendening broke the tie at the 12:44 mark of the third period with his seventh goal of the season to put the Hogs up 4-3. With an empty net goal from Brad Winchester, the Hogs took the 5-3 victory.

-The IceHogs outshot the Wild 39-36; Jason LaBarbera was in net for Rockford.

-The IceHogs did not convert on any of their three power plays and they killed off the Wild’s lone man advantage.

-Defensemen Theo Peckham and Zach Miskovic were both +3 on the night.

-The scratches for the IceHogs were:  Viktor Svedberg (injured), Brad Mills and Wade Brookbank (healthy).

Sunday’s contest against the Iowa Wild, once again, saw the IceHogs have an early 2-0 lead. The visitors got tallies from Jeremy Morin (now on a seven game point streak) and Brandon Pirri. The Wild cut the lead to one before the end of the period and tied the game at two just after the halfway mark of the second period.

Pirri came up with a clutch goal with about five minutes left in the contest to put the Hogs up 3-2 and Brandon Mashinter added an empty net goal to make the final score 4-2 Rockford.

-The Wild outshot the IceHogs 34-30; Jason LaBarbera was in net for Rockford.

-The IceHogs were not able to score on their one power play of the game while the Wild converted on one of their three man advantages.

-The line-up was the same as Saturday night.

-IceHogs winger Jeremy Morin continues to play fantastic hockey for Rockford. He extended his point streak to seven and in the last three games, he has six points (2 G, 4 A).

–Brandon Pirri has also picked up his play and has four points (3 G, 1 A) in his last three games.

–Pierre-Marc Bouchard was not in the line-up on Friday night due to travel issues, but he was outstanding for the IceHogs during their trip to Iowa. In two games, he racked up four points (1 G, 3 A) to help lead the team to two wins.

-The IceHogs now have a record of 26-21-4-3 (59 points) and sit in sixth place in the Western Conference standings.