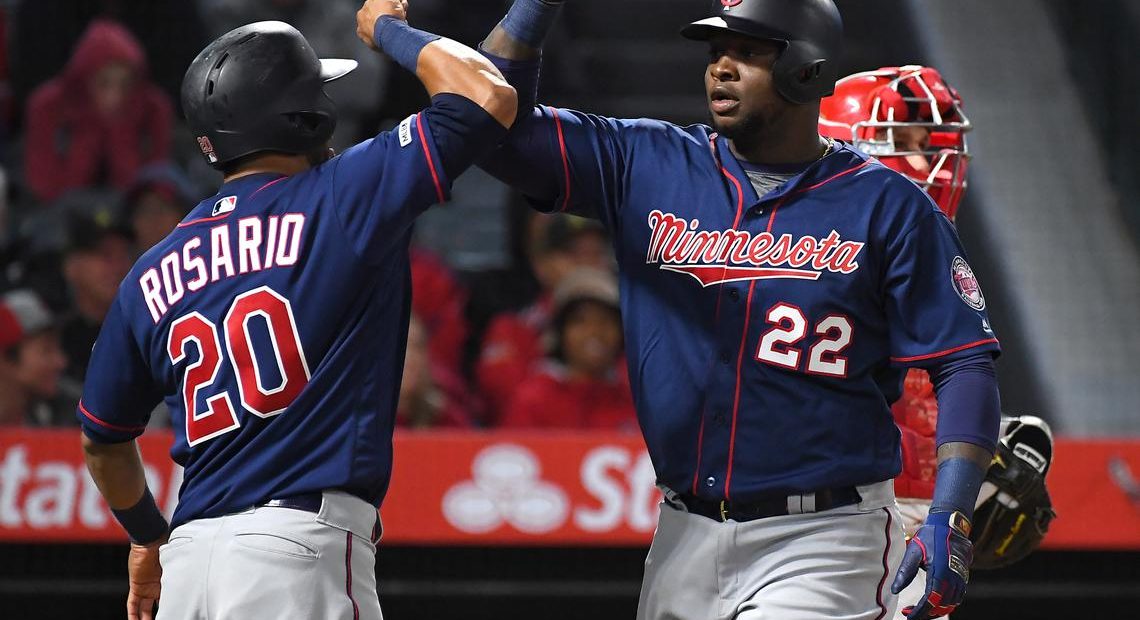 I sincerely hate the Minnesota Twins, but I have to give them credit where it’s due. In an age where the way you build an MLB team has changed completely from buying through free agency to building through youth and farm systems they’ve managed to land at the forefront of that particular revolution. It’s hard to say if they read the tea leaves correctly 5 years ago and just kept doing what they were doing, or if they just lucked into this by being cheap everywhere but their scouting, but either way it’s working out at an annoyingly high level.

Just looking at their current roster (which as of today still leads the league in team slugging percentage) it’s chock full of home-grown talent that includes the following on offense: Miguel Sano, Max Kepler, Eddie Rosario, Jorge Polanco, Byron Buxton, Mitch Garver and Jake Cave. The total WAR of that science lab creation of slugging so far this season is 17.1.  In comparison to the WAR generated by the homegrown talent of the White Sox offense (which is 27th of 30 in the league for slugging) is merely 9.3 (Eloy, Abreu, Moncada, Anderson, Yolmer and Engel). That’s not a very sightly set of stats for the Sox offense, and it paints the Twins in a pretty impressive light. HOWEVER! If you go back to the same group of players for the Twins last season, you get….9.7 WAR from those guys combined. Take those numbers and add in the fact that the Twins were 78-84 last season makes the differences between the Sox and the Twins a little easier to swallow, and maybe even adds a slight feeling of hope in there.

So you have the 2019 White Sox, who are pretty close to what the 2018 Twins were: Some high level prospects with a ton of talent and not a lot of major league experience combined with an untested pitching staff and shitty hydra for a 5th starter. Does that mean the Sox will lead the league in slugging next year? Probably not, but it provides a little insight into just how much time in the oven baking a professional team takes. It’s been forever since the Sox had to create a contender this way, so fans can be forgiven if they’ve forgotten how this type of rebuild goes. You’d have to go back to the early 2000s to find a team that was as built from the bottom up as this one is now.  Just look at this chart that shows top 10 Sox minor league prospects from the past decade (as decided by MLB.com). Be warned, it’s not a pretty sight. 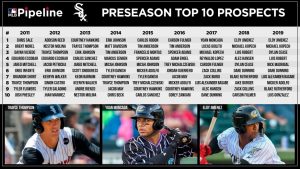 Hahahaha Trayce Thompson and Courtney Hawkins…good times, good times. That chart before the 2017 time frame is like looking directly into the Ark of the Covenant, except when you look into the Ark your head explodes so you don’t have to see a list with Jared Mitchell in the top 5 prospects anymore. Things after 2017 start to look much, much better (unless your name is Carson Fulmer), and resembles an actual major league farm system.

Now look at the same chart, but for the Twins: 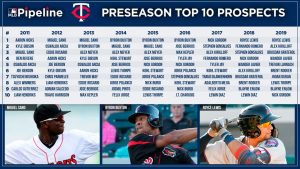 God dammit I fucking hate them.

If there were a blueprint for how to build an MLB team through quality scouting and franchise-wide patience, it would look exactly like that. Even the guys who aren’t with the Twins anymore are pretty quality. Aaron Hicks, Oswaldo Arcia and Ben Revere were/are all serviceable MLB players (In the case of Hicks, a little more than “serviceable”). In addition to that, they still have 2 top 20 ranked prospects in Royce Lewis and Alex Kirilloff sitting in AAA waiting for their chance. The Twins think so highly of both these players that they passed at legit chances to upgrade their struggling starting rotation a few weeks ago because teams were sniffing around those two.

The Twins have always done it this way, ever since Terry Ryan took over as GM for them back in 1995. He engineered many of the Twins teams that I absolutely despised in the early 2000s by using the “New England Patriots” method of shipping off players just before they were due to get paid for younger, cheaper talent. He snagged Johan Santana off the Marlins in the Rule 5 draft. He traded eventual Sox Legend AJ Pierzynski to the Giants for Joe Nathan, Francisco Liriano and Boof Bonser (best fake name ever). He also increased the money the franchise spent on scouting for the first time in decades. Ryan stayed with the Twins until 2016 when Thad Levine was hired away from the Indians after their loss to the Cubs in the World Series. Levine was cut from the same cloth that Ryan was, having helped build Cleveland into the contender it was through the same methods Ryan did. He helped draft Carlos Santana, Francisco Lindor, and Jose Ramierez so he knew how to build through the lower levels of the minors.

The Sox in that same period continued along the path that Kenny Williams set them on in 2006, consistently trading away promising young talent for one last gasp after another, year after year, until finally the team had no choice but to trade away the best pitcher in the history of the organization to jump start a clinically deceased farm system. Now that the team started the season ranked 4th overall in the league for their minor league system, the question that falls before Rick Hahn and company is can they develop players they draft? They’ve been able to trade for other team’s well scouted minor leaguers, and had pretty good success bringing them along. The Sox international scouting crew has been nothing short of aces so far, but the continental US team has been pretty hit or miss. Has Nick Hostetler done enough at the lower levels to reap the kind of benefits the Twins have done for decades? Is Chris Getz the guy to guide the next round of Sox prospects to AAA and beyond?

The Sox farm system was absolutely decimated by a plague of injuries this season that bordered on the biblical, so the only grade that can really be given so far is “incomplete.” It will be very interesting to see how Zack Collins, Nick Madrigal and Andrew Vaughn fare at the higher levels in the next few seasons as they have the potential to solidify the Sox lineup like Kepler and Polanco have done for the Twins thus far.