Turn On The News – Previewing the Minnesota Wild Forwards 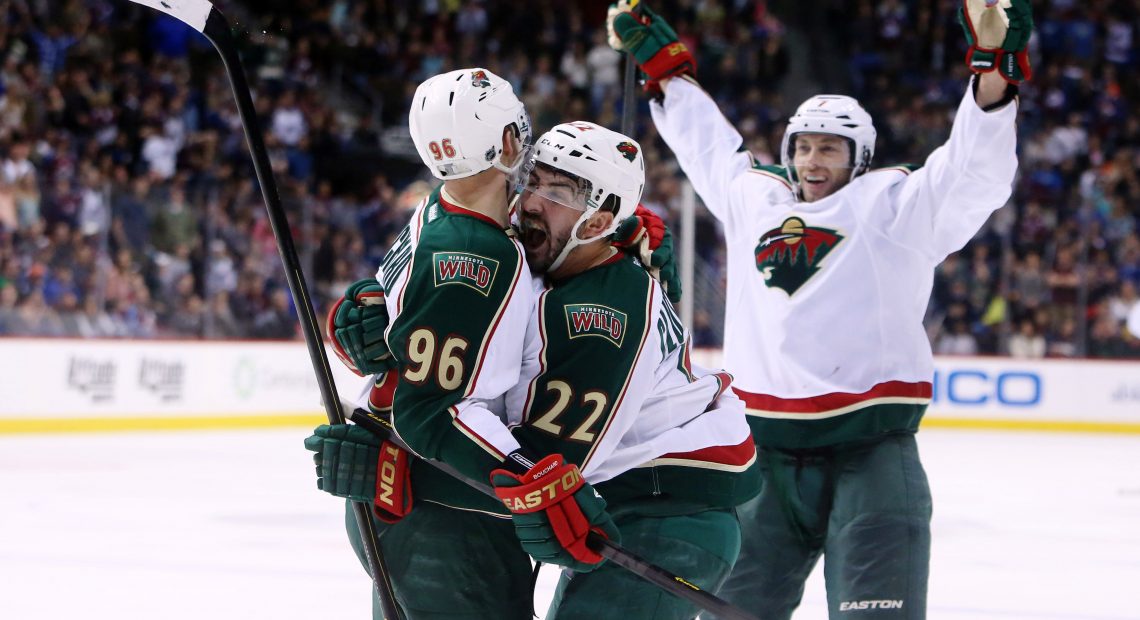 After last night’s three-way tango between the Minnesota, Scum, and Columbus left the Jackets on the outside looking in, the Blackhawks finally have an opponent locked up in the form of the Wild

In the regular season, the Hawks went 2-0-1 against Minnesota, with the shootout loss coming during the second game of the Hawks’ early season ice capades trip. Much has changed for the Wild’s forward corps even since the Hawks last faced them back on April 9th, where they were shut out.

Overall, the Wild don’t exactly set the world on fire offensively. They rank 22nd in the league with 2.46 goals per game, which is ahead of only San Jose among Western Conference post season qualifiers. As such they’re also the only playoff qualifier league-wide with a negative goal differential at -5. Part of that might be attributed to Dany Heatley’s season ending injury, but Speed Racer wasn’t exactly the Richard Thophy threat he’s been in the past prior to that with 11G and 10A in 36 games, along with a ghastly -12 (though that’s not even a team worst).

Trade Deadline acquisition Jason Pominville has missed the last two games for the Wild after taking an elbow to the chops from Dustin Brown, one which got Brown suspended. Pommer actually had 9 points in his 10 games with the Wild prior to his injury, which isn’t bad, but was an even +/-, and just barely above water with a .30 Behind The Net rating in his tenure with the Wild, fairly evenly splitting his time flanking either Mikko Koivu and Zach Parise, or Kyle Brodziak and and P.M. Bouchard. There’s no word on whether Pommer will be back for Tuesday or Wednesday, so the Wild’s lines were as follows from their final game against the Avs:

Much like the Hawks, the Wild’s top line features its best two-way center in Mikko Koivu, who more than likely will draw the assignment of the Jonathan Toews line, unless coach Mike Yeo decides to send out Kyle Brodziak in hopes of stopping them. Koivu was 54% at the dot this year, which while a positive, is not Toewsian. If Dave Bolland is healthy and deployed against Koivu, this could be a distinct advantage, however. Koivu and the very expensive Zach Parise played together the vast majority of the year at even strength, and are relied upon to be the Wild’s primary point producers. Koivu’s game is subtle, and could be described as Toews -lite, while Parise plays a power forward’s game despite being undersized for the role. Rookie Charlie Coyle gives the line some size at 6’3″, 222 lbs, so with Parise’s tenacious forechecking that was on full display last year, expect this line to set the tone for the Wild attack, and try to get pucks behind the Hawk defensemen and punish them physically on the end boards.

Minnesota’s second line is centered by the steady veteran presense of Matt Cullen, who readers of this blog should be familiar with after many a daydream of seeing him as a Hawks deadline pickup. Cullen is solid at the dot and is a crafty playmaker, and is far away the leader in Behind The Net rating among Wild regulars at 2.09. He’s flanked by Devin Setoguchi who has a very quick release, but finally scored his first goal in 13 games in the finale against the Avs, which proved to be the game winner. With any shoosty-type, Seto can run hot and cold, and has 14 points in 18 career games against the Hawks, though it feels like that number should be higher given the irritating nature of them. Jason Zucker is young and undersized, but the Wild will need him to find more offense if they hope at all to keep up this series.

Residing in Dave Bolland’s Dungeon for the Wild is their defacto checking center Kyle Brodziak, who starts 63.1 of his even strength shifts in the defensive zone. Brodziak does a decent job of flipping the ice by finishing about 45% of shifts in the offensive zone, and is only slightly underwater in his Corsi/60 at -1.6. But Brodziak is also a blinding -18 in just 48 games, as his 8G 4A output just simply isn’t enough to counterbalance the chances he’s yielding. This line also features the mustachioed Cal Clutterbuck, who is garaunteed to be everyone’s least favorite Wild (how stupid is that to say?) by series end. Clutts hits everything in sight and his skates only actually on the ice for about 25% of those. Be prepared for Foley and Olczyk to beat his hit stats to death, which are notoriously inflated by Minnesota’s home scorekeeper. It’s almost garaunteed that his contributions to this series will be a borderline hit and a shitty garbage overtime goal. He’s Diet Alex Burrows. That P.M. Bouchard has played 43 of 48 games this season is a victory in and of itself, and Nikolai Khabibulin is probably still pissed off about his spin-o-rama shootout goal, provided he’s sober enough to remember it.

The Wild’s fourth line has Mike Rupp, Jake Dowell, and occasionally Zenon Konopka on it, which should tell you all you need to know. Konopka can win a draw and could actually be a useful player if he ever shut up and focused, but it’s questionable whether he’ll even get out of street clothes this series.

Even if Pomminville is able to go early on in this series, the Wild still have a lot of trouble generating offense, as there’s just not nearly enough creativity or finish in the group. Regardless of any of the matchups Mike Yeo tries to get, whatever Quenneville tosses out to counter will have the Wild overmatched. Koivu and Parise may will themselves into a few good chances a game, but there just simply isn’t a lot of depth here.