Someone Take The Wheel – The Minnehaha Defense And Goalies 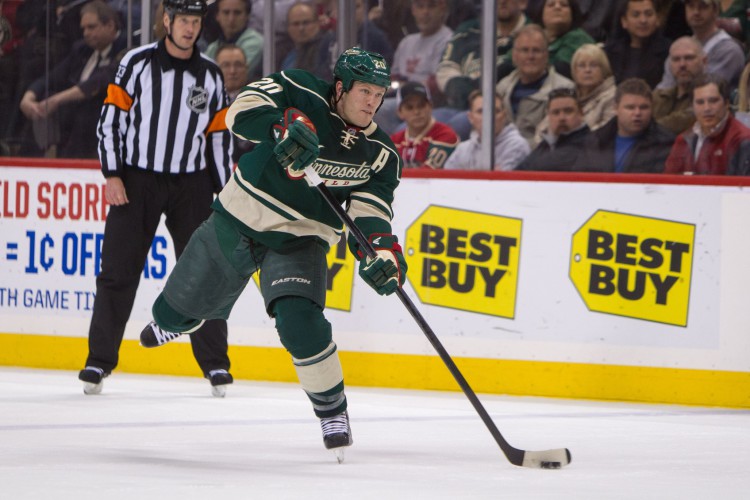 We’ll move toward the back for the Wild, and this is where the major cracks for them begin to show. The Wild’s blue line corps is kind of like a muffin. Scrape off the tasty top, and you’re left with a flavorless hunk of not much with the rest that you’d really rather just chuck in the trash. At least that’s what I’m told. I don’t eat muffins.

You can expect Ryan Suter and Jonas Brodin to approach if not crack 30 minutes a night in this series, because they’re going to be asked to do a lot. And this is the bind teams are going to face with the Hawks, no matter who they are. Will Mike Yeo try and get Suter and Brodin out against Toews’s line? You can do that, but unless the Hawks themselves (more to the point, Dave Bolland) take the puck away from Patricks Kane and Sharp, they’re going to go a little silly on your bottom two pairs. If you try and combat Kaner with your top pairing, then Wild fans will be shaking violently at the thought of Tom Gilbert and Jared Spurgeon out against Toews, Hossa, and Saad.

You know all about Ryan Suter from his days in Nashville. After a slow start in his first season hauling giant bags of money around the Twin Cities, Suter vaulted himself into Norris talk. There’s nothing he can’t do. The Hawks might try and target him physically, but he skates too well to really be punished. The Hawks have to keep him from driving the Minnesota offense from the back. If you can make him simply a defensive player, no matter how effective, you cut off a lot of the Wild’s creativity and threat.

Brodin has been a revelation this year, and really should be getting more Calder talk than he will. While the numbers aren’t all that eye-popping, Brodin has looked way beyond his 19 years. The thing about Brodin is he never looks panicked. He always makes the right decisions, and doesn’t do any of the reckless firing of the puck to anywhere that you might expect of a young d-man.

However, he’s still 19 and this is his first playoff experience. That’s a lot to ask of a player that age, without throwing Hossa and Toews slobbering like a Pavlovian dog chasing him down. If he passes this test, the Wild will know they have something truly special on their hands.

But this is where things get icky for those in green and red, and pretty exciting for those of us clad in red and black. Beyond those two, on the second pair it’s Tom Gilbert and Clayton Stoner. Gilbert is a poor man’s Dan Boyle, and Dan Boyle isn’t exactly a great benefit to a team these days. Gilbert can push the play offensively, but can turn into a Chinese fire drill in his own zone. And that’s even when Dan Carcillo isn’t trying to maim him on the end boards. Gilbert will QB the second power play unit, where the Wild are going to have to get something if they expect to extend this series to a point where we might start to sweat.

Stoner would be a fine #6 or #7 d-man on a good team, but asking him to play second-pairing minutes….well, needless to say one or a couple of Sharp, Kane, Stalberg, and Bickell will want this series to start in the next five minutes.

From there, it’ll likely be Jared Spurgeon and Justin Falk. Spurgeon is pint-sized, and isn’t having as good of a year as he did last year. The Hawks will definitely try and lean on him with the body with their bottom two lines, and he can get turnover happy. Justin Falk is every bit “a guy” that someone named Justin Falk would seem to be.

If they need to make some changes, Brett Clark and Nate Prosser await in the wings. Clark can bring some snarl, but both these guys don’t have the feet to not get their skulls caved in by the Hawks speed.

At first glance, the Wild defense can’t really do what gives the Hawks the problems and that’s using size on defense. Even if they force the Hawks to chip pucks in deep and get it back, they can’t jam them up on the boards like the Yotes did last year. They don’t have the behemoths to do that, and that kind of game doesn’t really suit Suter, Brodin, or Gilbert. They look set to be scorched.

There may be a fear of Niklas Backstrom turning into a monster and single-handedly making the Wild a threat to pull off the upset. But that doesn’t seem likely. Backstrom, like the rest of the Wild, didn’t exactly convince in the last few games when they were trying to lock down a playoff spot. He got lit up by offensive juggernauts San Jose, Calgary, and Edmonton. Backstrom has never won a playoff series either, but then again I suppose Mike Smith hadn’t before last year either.

Backstrom also hasn’t fared all that well against the Hawks, compiling a 5-8-2 record against them over his career. Though it feels like he’s played better against them than that, doesn’t it? He was all over the map against the Hawks this year. He came in relief of Josh Harding in their first meeting and didn’t surrender a goal in the final two periods. He only lasted one period in his appearance at the UC, as the Hawks put the Christmas lights on him for four goals on 17 1st period shots. He played well again in a loss at the X when the Hawks snuffed out anything resembling a Wild attack.

It’s not as if there’s some huge secret with Backstrom. He’s not that big, but he likes to cover the low part of the net when in trouble. The Bickell, Saad, and Hossa picked corners on him in the game in Chicago, and that will probably be the plan again. Backstrom’s rebound control can also get away from him, which is a problem when the Wild are as small as they are in some spots on defense.

But this series probably won’t have that much to do with Backstrom, just as it won’t with Corey Crawford. Considering the struggles the Wild look set to have with their bottom two pairs having to deal with the forward depth on the Hawks, Backstrom is going to be feeling like he’s crossing the desert and facing the unblinking eye most if not all games of this series. He could play well and still give up three goals per game.