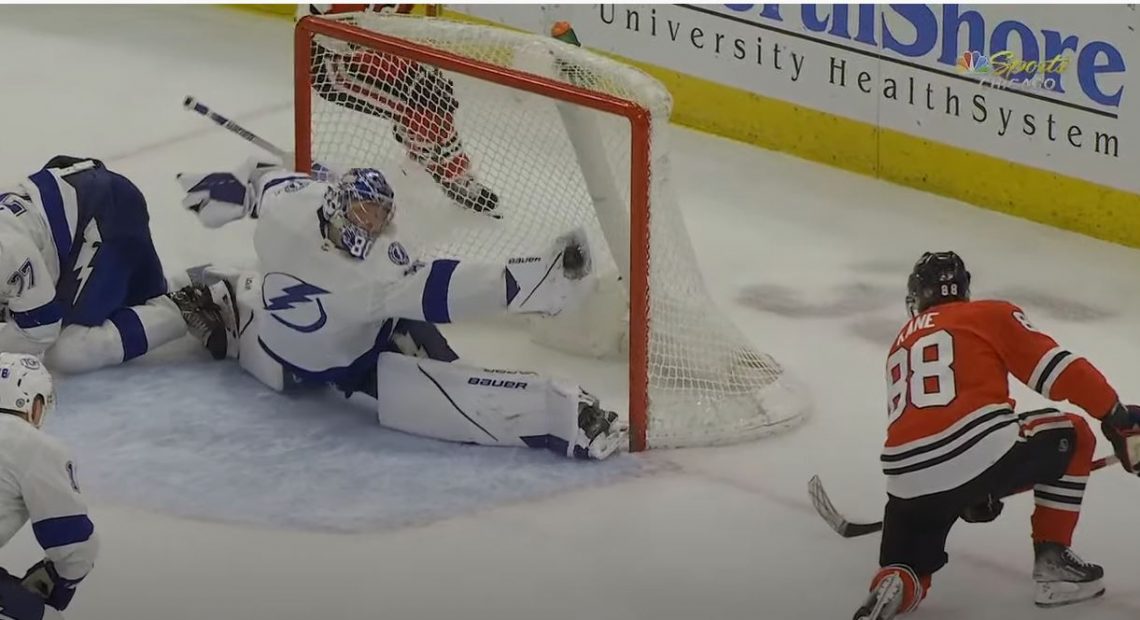 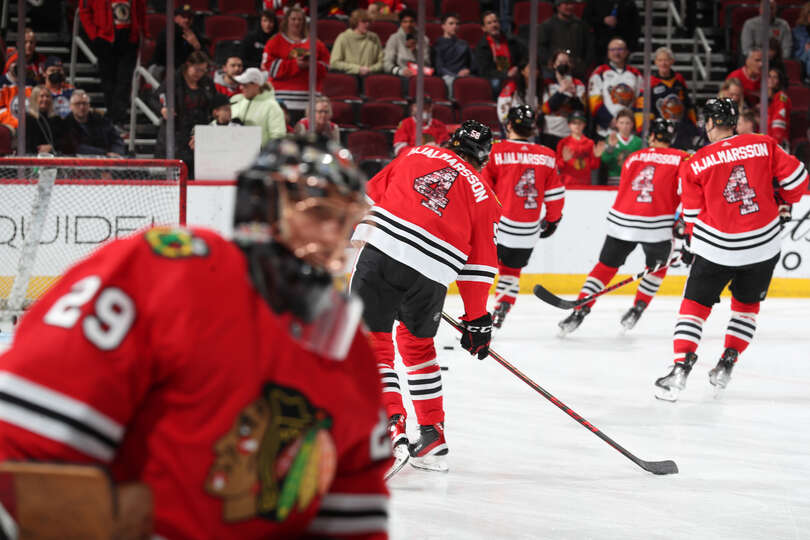 Apparently enough time has passed and enough people had been fired for it to be acceptable to finally have the delayed Niklas Hjalmarsson Heritage Night, whatever that even means anymore, and wade ass deep into the 2010 Nostalgia Bog that has been quite fetid for a while now. It was also Duncan Keith’s first game back in the United Center after 15 seasons with the team, so everything was as revved up as people could manage. And it’s probably ultimately harmless- as was stated in the immediate wake of all of this horror, nothing can take away the personal memories of these runs, just never forget who these people and what their priorities are.

As to matters on the ice, the Oilers are still very much the Oilers in that their goaltending is completely suspect (Mikko Koskinen’s turn this go around) and they don’t have anything beyond Leon and McDavid as far as scoring is concerned. But those two guys hide a multitude of sins, and the Hawks are still a bad team so they found ways to give them multiple needless opportunities on the advantage, which included two of the four Too Many Men penalties of the weekend, and nowhere near the most galling one. Alex DeBrincat ended things in overtime because he just does that and doesn’t have a better team to play for as of yet. 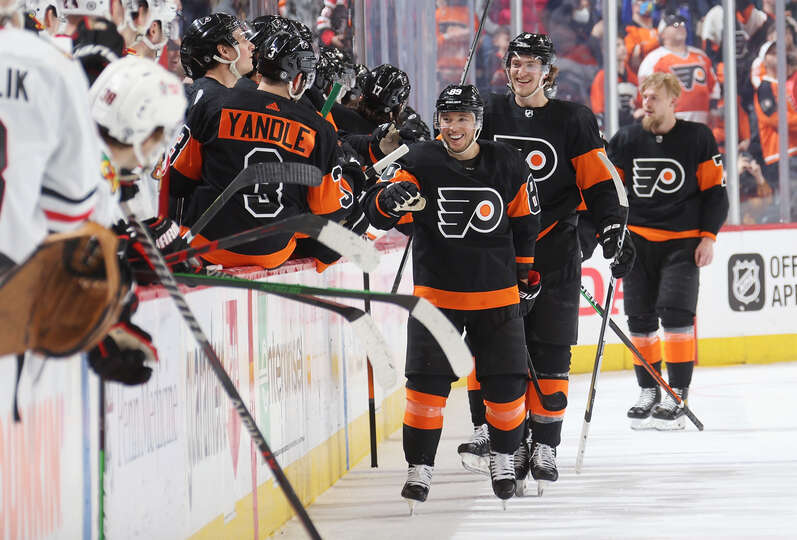 Speaking of that 2010 team, literally the only time the Hawks have won in Philadelphia in the past 26 years was June 9th of that year, and it took a blown two goal lead and an OT winner no one even saw to do it. Half of the Hawks roster was not even alive the last time the Hawks have won a regular season game against the Flyers, when the current building (whatever the fuck bank it’s being named after now) probably hadn’t even had the smell of Wawa Scrapple Hoagie farts permeate the walls yet. And this Flyers team this season has been particularly bad, even worse than the Hawks, and is bracing itself for the trade of long-tenured captain Claude Giroux to a team where he might finally be able to shake a label of ending up being a “But who gives a shit?” guy by the end of it. The Hawks were dogshit in the first and deservedly trailed before the back and forth what-have-yous started with teams trading leads and goals and cheap shots, including a hit that Kirby Dach absolutely should have been suspended for.

Kirby Dach goes high on Kevin Connauton, who headed up the tunnel. pic.twitter.com/SbgptoEZhg

That’s a charge, boarding, or interference for a hit long after the puck is gone, with quite possibly the most obvious targeting of the head of Kevin Connauton by Dach as has been seen in this league since Raffi Torres. Not only was he not suspended, he wasn’t even penalized. But the stupidest aspect of this game came in its waning moments where the Hawks had pulled an absolutely floudering Kevin Lankinen for an extra attacker down a goal, and somehow managed ANOTHER too many men penalty having seven skaters on the ice, their second of this game as well, and effectively killed any chance of tying this game late. Maybe if the Hawks had one REAL coach instead of just guy just playing the part and the other doing everything else from the shadows because his abusive past is bad PR, they wouldn’t keep fucking up on basic stuff like this. But regardless of how they got there, it ended the way it always does in Philadelphia. 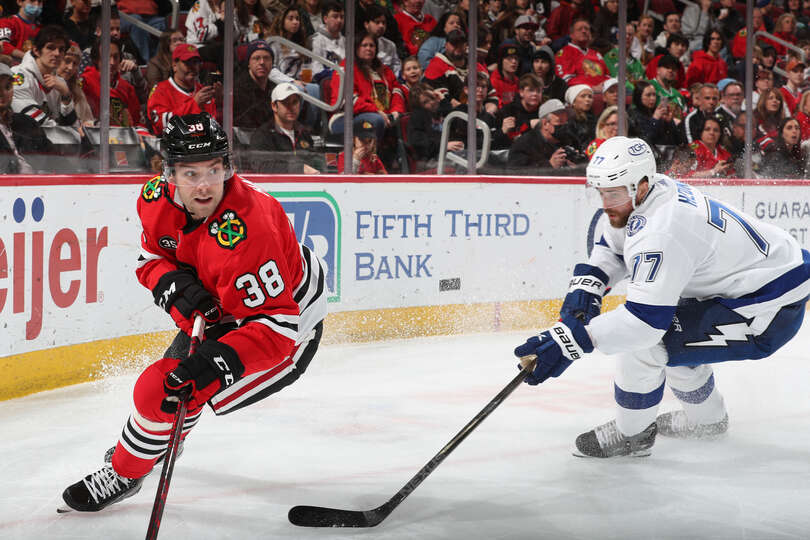 In stark contrast to the prior afternoon where they started like shit against a bad team, the Hawks were actually all over the Lightning in the first period, and would have been up at least a couple of goals were it not for the acrobatics of Andrei Vasilevskiy, who robbed Kirby Dach cashing in on a wide open net with the shaft of his stick among many other opportunities in the first, and that wouldn’t even be his most impressive save of the night. But as has often been the case this season, the Hawks serve as teachable moments for much better teams in order to refocus their efforts, and after what was surely an inspirational and sexually explicit intermission speech from Jon Cooper likely incorporating some lessons he’d learned from watching Real Sex reruns, the Bolts quickly equalized things at the start of the second period. Garbage Dick would put the Hawks back on top briefly before a late period flurry (not Fleury) saw the Lightning cash in on the power play followed quickly by one of the Garbage Foote Sons getting his first of the year off a loose puck on a pile up in front.

Things would get exponentially worse from there with the Lightning scoring 3 goals in 32 seconds to start the third to bury the Hawks, with Stillman and McCabe out there for all of them. The Hawks would get another deflection by Vasilevskiy, but he’d have the last laugh with another save of the year candidate sprawling to his left across the crease to make a glove save on Kane, as well as walking out with the 2 regulation points no worse for wear. This is how far away the Hawks are, and hopefully they make seismic moves soon to start to claw their way back to relevance, because there’s no competing with that team in blue with what they’re currently tossing out there.