This Used To Mean Something, This Used To Be Important: Canucks at Hawks Preview/Gould Burial

TV/RADIO: WGN for both locally, Sportsnet for the hosers

The Hawks continue this homestand against the trash of the Western Conference, the Preds were the only surefire playoff team on it and that wasn’t even technically part of the homestand, against what used to be their tastiest rival the Vancouver Canucks. Now? Just a bunch of has beens, whosits, and weird twins.

That’s the story with the Canucks, as Shooty and Passy Twin are playing some of their best hockey in years, with Shooty in the top five in scoring at the age of 35. Out from the shackles of Tortorella for a second season, the Children Of The Corn are riding some cushy zone starts and competition to heavy production. And it’s a good thing too, because the rest of the forward crop is underwhelming to say the least.

Radim Vrbata managed a hat trick last week against the Sabres, but that broke a streak of three goals in 17. Jannik Hansen runs with Shooty and Passy, but he’s getting up there. Bo Horvat has had to take Brandon Sutter’s checking line role which has neutered his production. Alex Burrows is here to do…. something. When we find out what we’ll get back to you. Jake Virtanen is in the AHL, and Jared McCann is their second line center and a rookie finding his way. Oh, and the 4th line might be the biggest collection of jerkoffs in the league with Prust, Cracknell, and Dorsett.

The defense is even a bigger worry. Dan Hamhuis took a shot off the face earlier in the week and might not be back before the trade deadline when the Canucks might have looked to offload him (and certainly should). Elbows Edler and Chris Tanev are the top paring, and Tanev in particular has struggled with the promotion. When you miss Luca Sbisa, you are an unfortunate blue line.

Backing it all up is Ryan Miller, when he’s not painting his nails black and waiting for Morrissey to tour. He’s been just about average this season, which is better than he was last year but not enough to prop this outfit up for more than a middling 11-11-8 record, which is actually good enough for a playoff spot in the Pacific because that division needs to be quarantined and then probably killed off in a controlled explosion.

For the Hawks, it looks to be the same lineup that didn’t break too much of a sweat in shutting out the Jets. Which means everyone’s favorite October darling CatButt will once again be scratched for Man Shitter. This is a team the Hawks should actually get over at even-strength for once. They sport only one line and the Hawks can get Hammer and Seabrook out against them, and for all the gifts of Thing 1 and Thing 2 speed isn’t one of them. The last time the Hawks played this team they let the Sedins go off for nine points combined and hence got pretty well thwacked out of the building. That really shouldn’t happen here. Corey Crawford gets to continue his roll.

While it looks like the schedule has opened up, we know what a headache the Avs have been in the past for the Hawks and the Oilers have been one in two games this season, so a win here isn’t vital but it sure would help (not that the Hawks are ever going to choke away a six point game to the Jets but hey, bigger the merrier, or so all those jewelry ads tell me). Even with as mismatched as the Hawks’ forwards are they should be torching this blue line until it’s burnt to a crisp.

Stop the Sedins, you’re basically there.

If you’re going to tonight’s game, pick up a copy of our gameday program outside. If you’re not, you can get a digital copy right here.

Tags: Chicago Blackhawks children of the corn Corey Crawford this used to be something Vancouver Canucks 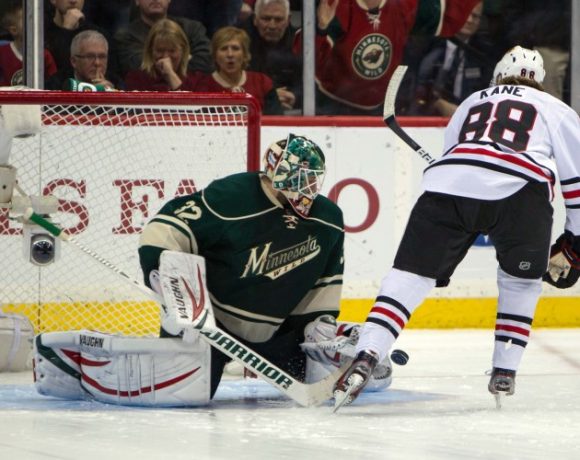