I Use Your Eyeballs for Dials on My TV Set: Blackhawks 4, Canucks 0 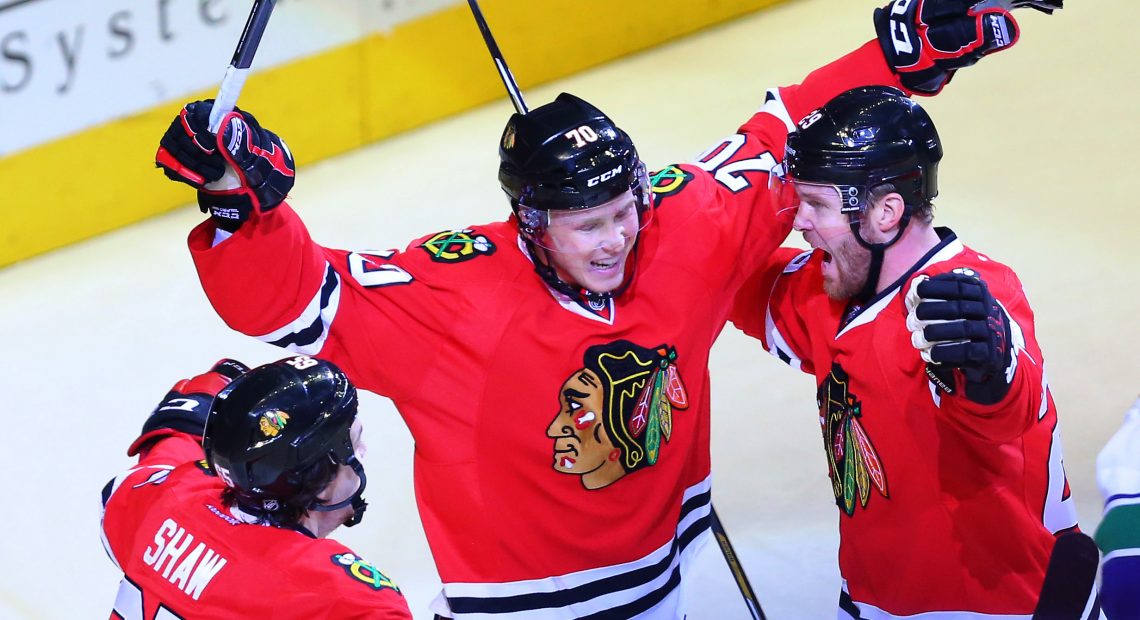 With the advantage of the last change, the Blackhawks were able to match the Canucks’ lines 1 through 4. The Sedins got the best of the Toews line and then the Hawks three other lines pretty much had their way with Vancouver including Dr. Rasmussen’s line who donkey whipped Derek Dorsett’s line to the tune of a combined Corsi of +47. I hear that’s pretty good.

–As I mentioned, Dr. Rasmussen’s line had quite the evening. Considering the  competition, it shouldn’t be unexpected. However, the Hawks bottom 6 has had lesser competition get the best of them this year. Bryan Bickell, in particular, had a strong game and had a couple other opportunities to score other than the one Rasmussen vultured from him.

Shaw and Bickell both had a strong game below the goal line. It shouldn’t come as a surprise but it was nice to see for a change.

Dr. Rasmussen made a pretty heady play on his goal when he slightly redirected Andrew Shaw’s pass over to Bryan Bickell. Had the good doctor tried to hold on to the puck on his own, the Canuck defenseman would’ve jumped up on him and likely tipped the puck away before Rasmussen could make a play.

Instead, he dummied the pass over to Bickell, thus keeping the defenseman off balance and opened a lane large enough for Bickell to get his shot off.

–One thing the Hawks did an excellent job of tonight was the subtle lift of a Canucks’ stick to regain possession. Artemi Panarin, Trevor Daley, Shaw and Patrick Kane all had plays that stand out where they neatly lifted the stick of a Canucks’ player and stole possession of the puck.

That play has almost become a lost art over the past decade or so as more players have developed the awful habit of chopping down on an opponent’s stick instead. (Brandon Saad loves doing that more than anyone) I loathe that play because the two likely outcomes are either A) breaking an opponent’s stick which is an automatic penalty or B) having him grip his stick even harder. Not to mention that many attacking players anticipate the stick chop now and lift their stick to avoid contact while still possessing the puck.

The stick lift, on the other hand, can’t be defended if done properly, as was seen many times tonight.

–This is quite the run Corey Crawford has been on. This has probably been his best stretch in the regular season since the 2012-2013 campaign. If it continues, I don’t see how he doesn’t get consideration for the Vezina. Of course, his reputation (both nationally and locally) will do him no favors in that department which is ludicrous.

–My favorite David Rundblad moment came when he had the puck behind his net waiting for the breakout. He slapped his stick on the ice as some sort of deke to the Vancouver forechecker. Then buried his head and tried to hammer the puck along the wall. By that time, a Canuck defenseman was already stapled against the boards waiting for the puck.

This led to a point blank opportunity when the game was still in reach and forced Crawford to make an excellent save on.

–The MANSHITTER scored. So now he’ll definitely be a lineup staple for the next two months, minimum. Should be fun.

Remember when the Hawks opened the season with 13 forwards that everyone agreed were ok? It was momentous while it lasted.

–With the underbelly of the schedule in full swing, the Hawks can really rack up the points in the next four games as they face Colorado, Edmonton, Buffalo and San Jose. They only face Buffalo on the road. 6 out of 8 points shouldn’t be out of the question. Then they head to Dallas for the first meeting and you can bet the Stars will get the Hawks full attention there.