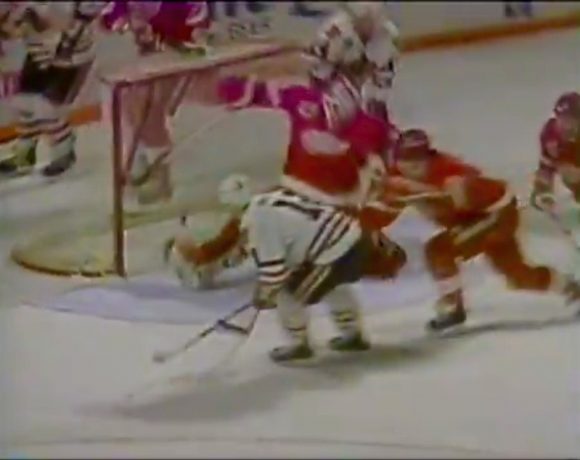 Game #61 – Hawks vs. Red Wings Douchebag Du Jour: This Used To Be My Playground

We know that time waits for no one. Things change in sports even more quickly than they used to, and the tenets of your childhood fandom rarely apply when you get older. There was a time when the Hawks and Canadiens were bitter rivals. Hell, most of you can remember the Hawks and Leafs being so.

But Hawks-Wings…that was supposed to be a pillar. That was timeless. That was foundational in the fandoms of both sides. Soon after you learned what the point of the game of hockey was, you were taught that Detroit sucks.

These games used to mean something. And though for the most part they only brought pain and anger, they were symbolic. At the bottom of your Hawks fandom, the times when you didn’t even know what you were doing there or why you were even bothering, there was a game against the Wings to define it. At the opposite end of the spectrum, the height, there was Game 7. Whatever your Hawks memories are, chances are a game against the Wings are what gives it color.

And it went beyond hockey. Chicago-Detroit was just about the only city-rivalry that accompanied all four sports. The Bears and Lions have been throwing themselves at each other for almost 100 years. The Bulls and Pistons had one of the most bile-filled rivalries in NBA history, and the Bulls ascension wasn’t complete without Isaiah and Laimbeer sulking their sorry, bitter asses off the court before the final buzzer. Don’t let Bulls fans tell you that part of the joy of getting the first three was that it was more than Detroit’s two that came directly before. The White Sox and Tigers have had some decent division chases, back when that sort of thing used to happen in baseball.

And it was more than that. It was two Midwestern cities that at least claim to be have sterner stuff than the coasts, one falling on hard times and another looking like it’s following suit now. Two places where sports truly mattered. Don’t think wins for Chicago didn’t reaffirm our true belief that Chicago is the capital of the whole middle (and it is, or at least was). Everyone wants to be here.

All the reasons for the Wings move to the East makes sense on some level. And they’ll build new rivalries whenever they matter again (2029). Perhaps they feel they’ve gained far more than they’ve lost. Probably they have. But we’ve lost something, and it’s not coming back, no matter how hard the Blues and St. Louis residents stamp their feet and whine. Or Milwaukee gets a team to complete the Chicago-Wisconsin set.

It’s even been sanitized further after the Wings move to Shit-Ass Pizza Arena. The Hawks were just as guilty decades ago of course, but even in the East at least the ghosts and echoes still rang within you when the Hawks showed up at Joe Louis Arena (avoiding the muggers, of course). You could still see all that went on there if you looked hard enough, be it Darren Helm’s OT winner or Frolik’s penalty shot or Probert chasing Roenick all over the ice or Kris Draper’s big dumb face. Now the Wings play in an arena that could be anywhere. They might as well be the Jackets.

Of course, we’re the last people that will care. Younger Hawks fans have probably all moved on, once their parents or older siblings shut up about what this used to be. That’s how it works. Maybe letting go of such things will be healthy. But what’s hockey without a grudge somewhere?

This Used To Mean Something, This Used To Be Important: Canucks at Hawks Preview/Gould Burial

TV/RADIO: WGN for both locally, Sportsnet for the hosers

The Hawks continue this homestand against the trash of the Western Conference, the Preds were the only surefire playoff team on it and that wasn’t even technically part of the homestand, against what used to be their tastiest rival the Vancouver Canucks. Now? Just a bunch of has beens, whosits, and weird twins.