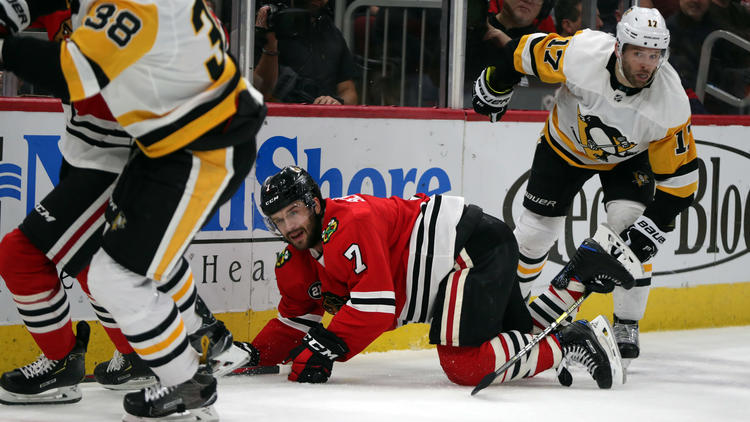 I was in attendance to last night’s streak-breaker, and it was one of the one or two occasions that I attended alone. Don’t worry, this is something I like to do, both at the UC and Wrigley, for any assorted mental reasons and also because I do focus on the game more intensely.

I was surprised at the lack of rancor in the crowd last night, though some of that had to do with the abnormally large traveling contingent clad in black and gold. The Penguins always travel well but this was beyond what I was used to. It must be a Pittsburgh thing, aside from the Pirates as the only Bucs fans I’ve met have to be kept away from sharp objects at all times if they even admit to being one. Anyway, it seemed like there were a decent amount of fans who had previously been priced out of the building who are now gobbling up the reduced ones on the secondary market and happy to do so. Can’t say I blame them. We’ll see how that continues over the next few months.

As I sat and watched this contest between one fallen giant and another headed that way (and the Pens only have the Metro’s incompetence for that decline not happening faster), I thought a lot about a couple themes that have taken to the fore this season.

One is that Hawks fans have little to no right to be upset after what’s taken place only a few years ago. To me this has always been utter horseshit. This is not how being a fan works. Maybe for some it does, but if you’re reading our silly/stupid/psychotic little blog then it hasn’t for you. That’s not how stories work. While we still carry the memories and cherish them of a few years ago, we keep coming back. Just as we did when it was the reverse and the Hawks sucked for years. Just because previous episodes were great doesn’t mean we stopped watching the current ones (hell, I hung on to the Simpsons for years after they lost their fastball and the Hawks aren’t anywhere near that yet). It’s supposed to keep developing and we along with it.

I’ve never understood the idea that if we’re upset the Hawks suck now we should just pop on DVDs from 2013 or something. The point of sports is that it’s continuous and always there. The story continues. The past gives it context and light, but we’re here for now, too.

Which led me to the next train of thought, as I watched Brent Seabrook waddle his way through another clanger of a game. Because the story continues, and because of the inherent stupidity/unfairness of the NHL system, players like Seabrook are held up for treatment and scorn they should never have to deal with.

I’ve listened to far too many people honestly discuss a trade of Duncan Keith. Just as we did last season with Jonathan Toews. We’ve heard the lamenting of Seabrook’s contract. And to me it’s dispiriting at best, disgusting at worst.

All sports are moving this way now, and have for a while, but the NHL’s hard cap system forces fans to see players as only parts, or assets. Brent Seabrook is no longer Brent Seabrook. He’s Brent Seabrook’s contract. Duncan Keith is Duncan Keith’s trade value/possibility. It may not be long before Patrick Kane (setting aside all the other issues for a minute) or Corey Crawford become What They Can Be Cashed In For.

It’s not fair to the players, but it’s also not fair to the fans. No longer will any player aside from a very select few get to finish their careers with one team, unless they do some curtain-call like Patrick Sharp’s last year which felt sort of empty. It only happened because no one else would have wanted him. It’s a sideshow, not a swan song or farewell.

It’s not just the Hawks. Kings fans are probably going through this with Jonathan Quick or Anze Kopitar. The day is coming for Kris Letang, maybe even Evgeni Malkin. Teams that didn’t win have it, too. There was actual debate in Vancouver about whether the Sedins could or should be moved before they decided to retire, which is patently ridiculous. Watch what happens in Toronto over the next three years before they even get a chance to define what they are. Henrik Lundqvist wanting to stay put in New York has colored some fans against him, which again, should never happen.

But in a hard cap era, when you produce or acquire enough good players to open a window and then that window begins to close, a team is left with no choice. There is no way you can construct a team by never handing out more than say, three -or four-year deals. No player worth a shit would ever accept that. Victory eventually defeats you, if I can retreat to dork-dom. But that should be because of time, not because of dollars.

The answer is simple, which the NHL and the NHLPA only barely waved a hand at the last time they crafted a CBA. It’s some sort of Bird-rule exception for a team’s own free agents. Right now it’s just the ability to add an eighth year to a deal, which is a nothing. What the NHL needs is some sort of percentage of a player’s cap hit/salary to make his retention by his team easier. All a salary cap does right now is punish teams for having too many good players, which is the whole point of the fucking operation as I understand it.

Let’s say that only 75% of  Seabrook’s salary counted toward the cap. That would be a $5.1M hit. Still big, but not paralyzing. And Seabrook would still make the money that being a top-pairing player on three Cup champs has warranted him to be. It would certainly be less likely to put the Hawks in a spot where they have to sacrifice another player in service of paying what will be a team legend one day, as they have so many other times.

Of course, the easier solution than that is a simple luxury tax system, though one less punitive than baseball’s which has acted like a salary cap anyway. If teams want to go over, want to reward their players yet still remain competitive because they have the means, then they should do so. And if that enlarges “competitive balance,” yeah, well, tough shit. Having a hockey team in your town isn’t a right. Get a better GM and better scouts. Don’t fool yourself, the system right now only protects owners from spending money they have but just want to hold onto. And if they don’t every single one of them could sell their team for an obscene profit.

Seabrook, Keith, and Toews in the past have done far too much for the Hawks and the fans to have to deal with being seen as merely what they can return in trade or absence. While they’re paid professionals and it’s part of the job, it’s harder on fans whose memories get more and more sullied by views of the players who provided them now.

I don’t like hating on Seabrook. In fact, it hurts at times. And I or many others wouldn’t if his contract weren’t such an obstacle. We can’t help but see it that way because of the things the Hawks must do to rise again. Why is this working out for anyone? We should see what the players are now of course, but we shouldn’t have to turn on them because a team decided to give them a lot of money. They didn’t force anyone to do that.

Yes, Seabrook and Keith have culpability in how they’re perceived. Seabrook through his fitness levels and Keith through the lack of adjustments in his game as he ages. That doesn’t mean they should go from hero to wares in the span of a few seasons.

Of course, any of this would require an actual spine from the players’ association, who would probably have to strike to get it. Instead they’ll just roll over again to get their bellies tickled when the new CBA rolls along. And players like Seabrook and Keith will get hammered for what they used to be, and their paycheck.