High On The Hog: Time To Step Up, Scorers 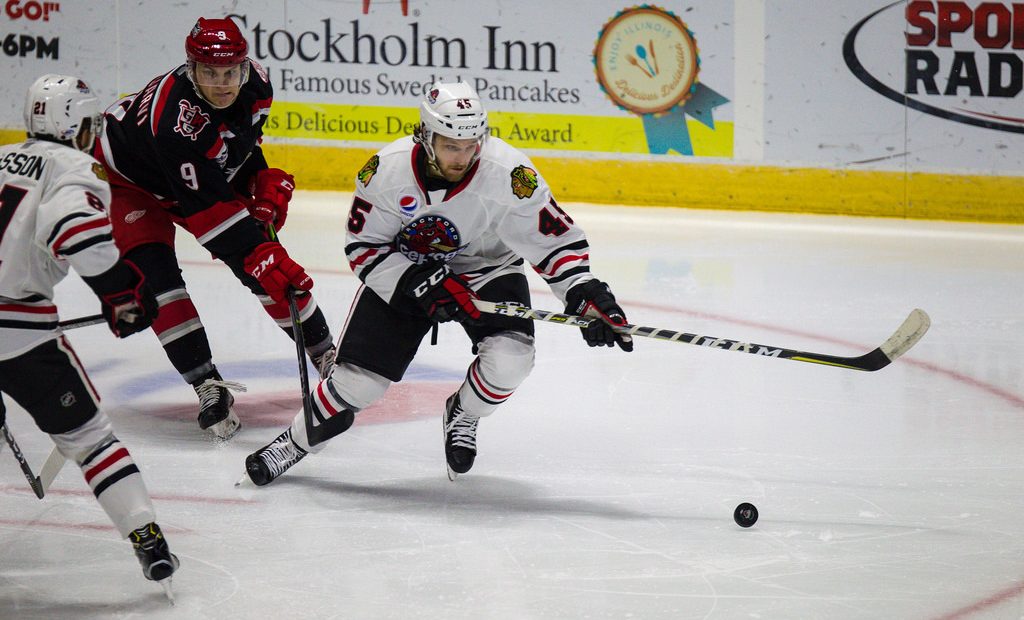 Entering Friday’s game in Grand Rapids, the Rockford IceHogs are staring at three consecutive games this weekend. The piglets, who have already been struggling, will be missing their leading scorer, along with their most capable defender.

Dylan Sikura (9 G, 9 A) and Carl Dahlstrom were recalled this week to the Chicago Blackhawks, leaving several players behind that will need to pick up the slack. One of those players could be Alexandre Fortin, who was assigned to Rockford after spending the first couple of months with Chicago.

Provided no other team makes a claim, defenseman Jan Rutta may also be with the IceHogs in time to take part in this weekend’s action. How much impact Fortin and Rutta could have in Rockford remains to be seen. However, there are several players currently on the Hogs roster who would do well to step up. Time to name names…

What Have You Done For Me Lately?

Over his last ten games, Sikura the Elder has just one goal and one assist. He has been as active around the net as any of the Hogs have been in that time, but it hasn’t shown up on the scoreboard.

Last year’s points leader is scoreless in four December contests heading into Friday. His last goal came on November 23 in a loss to the Wolves.

Since returning from an injury that kept him out for a couple of weeks back in November, Schroeder has just one goal in ten contests. His other three goals this season have come off the power play, which has been a little quiet the last month.

Ejdsell has a goal and five helpers in 16 games in November and December. He’s also carrying a minus-three skater rating in that span.

In his last 11 games, Raddysh has a goal and two asssists.

Like Louis, Broadhurst is pointless in December. In his defense, he’s recently returned from injury. However, the Hogs thirst for veteran scoring and Broadhurst is one of the players who can help in this area.

Rockford’s best players are not producing on the scoreboard. That has to change soon. If each of the above players could get on the score sheet this weekend, I like the IceHogs chances for a couple of wins.

Who Could Provide Some Jump To The Lineup?

Well, Fortin brings speed. He had trouble hitting twine last season; perhaps he’ll come down from the NHL and contribute on the offensive end. It appears that William Pelletier could be ready to get his season started soon. He might be able to provide a spark.

You know what? If Graham Knott could convert on his scoring chances, you could see a scoring outburst out of him. He’s put himself in some high-percentage opportunities but just lacked the power to finish. Maybe it takes that one shot that gets past a goalie to open some sort of flood gate.

With strong goal-tending this season, it should come as no surprise that the IceHogs are quite adept at killing penalties. Their kill rate of 87 percent is third in the AHL in this catagory. The power play is converting at just 14.5 percent, though.

The Hogs are still dead last in the league in goals and by a fair sight. They are scoring at a 2.27 goals per game clip. Rockford only gives up 2.88 goals per game, good for third in the AHL. As mentioned earlier, if the team’s top offensive players could start representing, the play in net could sustain a hot stretch.

As it is, Rockford (11-10-1-4) just hasn’t been able to string together victories. The IceHogs have not won more than two in a row all season long.

The weekend is book ended with meetings with the Griffins, with whom Rockford has split two previous meetings this season. The Hogs visit Van Andel Arena Friday and host Grand Rapids at the BMO Harris Bank Center Sunday afternoon.

Rockford has not fared well in Grand Rapids in recent seasons. In the past five years, the piglets are 5-11-3-0 at Van Andel Arena. The Giffins are third in the Central Division and are coming off of a 5-2 loss in Milwaukee Tuesday night.

On Saturday night, the IceHogs host Texas, who have won four straight and are fourth in the division standings. This is the third meeting between the two teams, having split the first two.