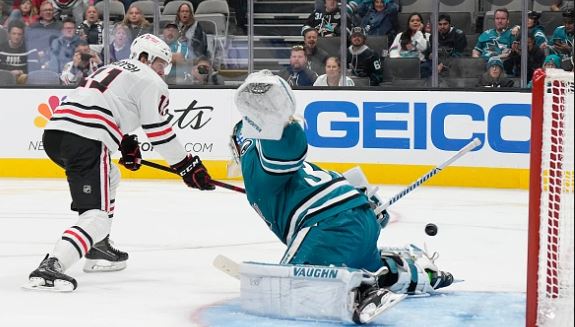 So far for this organization, the narrative has been followed—the team is bad, the offense is bad, the expectations are low, and games were lost. There is very little to enjoy about the Hawks but I’m gonna try to point out the good where I can. But before we get to anything positive, let’s call it like we see it: the Hawks have only scored twice so far this season on even strength, which is pretty fucking terrible. What is worse is that they are currently considered the 10th-worst team in the league, which doesn’t bode well for the whole “tanking-for-a-#1-draft-pick” plan the front office has laid out. From a numbers standpoint, other teams factually have it much worse than us. Let’s review.

Did you expect this to go any better? The Hawks had to start their season against the reigning Stanley Cup champs after they raised their banner in Colorado and were outskated, outmatched and outplayed the entire night. The only genuine highlight was Toews scoring the first Hawks goal of the season on the powerplay, with an assist from Andreas Athanasiou. The powerplay was the only time the Hawks could score, which means having one extra man on the ice was the only way to even out the talent level enough for the Hawks to have a chance. Otherwise, our d-men were getting pantsed by Cale Makar and domed in possession for 2 of the 3 periods.

Within this game scored the only goal by Kane’s line all god damn week which is not a promising start—very underwhelming, in fact. If the goal wasn’t to tank this season, our first line scoring 1 goal in the first three games would certainly be a red flag, especially since Kane is flanked by the shiny new free agent acquisitions that were supposed to placate us. But red flags like that are positive for a tanking team, right?

The theme for this night was that it genuinely could’ve been worse. The still-undefeated Golden Knights with their new #1 center in Jack Eichel were only able to score one goal against the Hawks as opposed to the 5 goals we’d let in the night before. Alex Stalock made 36 saves and didn’t look too bad except for when he seemed to lose his net at one point in the 1st—luckily Vegas wasn’t able to score on a wide-open net.

The Hawks’ main issue of having shit and nonexistent offense continued into this game, and of course this was their second straight game without having an even-strength goal. The Hawks had 10 less shots to the Knights’ 37, and their 2-shots-per-powerplay formula was helping nobody here. In fact, the only goal of the game came right after the Hawks powerplay in the 2nd period, directly after a shorthanded opportunity for Vegas. Vegas is looking like a top team right now whether you like it or not, however, so the fact the Hawks only held them to 1 goal when their average so far this season is over 3 per game, that’s somewhat surprising.

Of all the teams the Hawks had to face, only the Sharks match them in pitifulness. Both teams showed up in the building with a goose egg in the win column so someone had to pick up the points. The Hawks jumped out ahead for the first few minutes of the game and the Sharks were unable to register a shot for the first 11 minutes. But the Sharks ultimately did score first, getting a shot past youngins Philipp Kurashev and Filip Roos that Peter Mrazek didn’t even see (shocking). The Sharks scored again shortly after as a shot deflected off Amy’s Eldest and went in to wrap up a shitty 1st period. Surprisingly, the Hawks were able to take control from here and turned the game around.

It was Jason Dickinson’s first night in a Blackhawks uniform, and his line with Philipp Kurashev and Sam Lafferty took the game’s opening faceoff. The line would then go on to have 7 points between them that night (2 goals for the line). Lafferty’s 2 shorthanded goals meant the special teams scoring was starting to add up for the Hawks, although that’s not too hard when the Sharks can barely get a shot off. Still, the Hawks collected the win and the plan to tank for Connor Bedard was put on a temporary pause.

This weekend, the Hawks have their opening night game against Scum, but considering the team to the northeast is without a regulation loss this season, it appears the losses for Chicago will continue to stack up. That shouldn’t be unexpected news, however.