Thanks to Mick and Keith and their 10th and 11th full blood transfusions between the two of them, the Hawks and Kings will play their second game of the Western Conference Final about 24 hours on the nose after game 1 concluded. Whether or not that gives either team an advantage is debatable, but I’m sure both would have preferred a day off in between.

For the Kings, a day of practice probably couldn’t have hurt, as it appeared that they were a step behind in asserting their vaunted relentless forecheck. With the Hawks able to find release valves under pressure with regularity last night and remaining patient while being down a goal, it left the Kings grasping for things that will work. And as the Feather pointed out in his astute wrap last night, in the third period they began realizing that working behind the net in the offensive zone can work to their advantage. The Hawk blue line lacks the size and the physical edge (in most places) to make traversing that area of the ice a punishing experience, and the Kings do have some playmaking ability to go along with their hulking physicality to make that happen. Look for this to come to the fore early tonight.

Yesterday also saw the return of Kings center and swordsman  Jarret Stoll, which saw him win 10 of his 19 draws, but also enabled top center Anze Kopitar to get far more shifts starting in the offensive zone, something he could not do out of necessity in Stoll’s absence. The Kings as a team fared better at the dot than they have as a whole in the playoffs to this point, going 33 of 64, and that’s even being at a disadvantage on the road. They’ll need to maintain that, as the road -grater contingent of the Kings’ D-corps found itself with severe windburn with the Hawks using their speed to the outside, particular on Patrick Sharp’s handsome goal. There have been no lineup changes at press time, but it would not shock anyone if Darryl Sutter had no use for Dustin Penner’s two offensive zone penalties yesterday on top of his terminal case of being Dustin Penner.

In the Kings net, there’s not much more that they can ask Jonathan Quick to do than he did yesterday. Quick put on full display just what an infuriating obstacle he can be. And though it was said in the previous rounds of the Hawks winning “The Josh Harding Game” or “The Jimmy Howard Game”, the fact of the matter is, every game is “The Jonathan Quick Game” in this series against the Kings. There simply will not be a game where he relents and the flood gates open with the way he’s now locked in after recovering from his early season yips as a result of his back surgery.

As for our Men of Four Feathers, it cannot be stated enough how exemplary their breakouts were under the siege of the Kings’ forecheck, particularly after going down early after thoroughly outplaying the Kings in the first. The tendency with this team has been to start evacuating the defensive zone like someone had soiled themselves in the slot area when down a goal or two, so full marks must be given for staying the course.

And naturally, in that regard, expect the Hawks lineup to stay the same today with Bryan Bickell remaining on the top line. Though Brandon Saad has done nothing by way of the quality of his play to warrant the demotion, he’s simply fighting the puck a little bit with regards to getting off the schnide in the goal department, and the Hawks don’t have the luxury they did earlier in the season for him to work through it. But if he continues to play the way he has, they will certainly come.

Also looking a little more functional was Michal Handzus, who was able to win 8 of 14 draws, including a clean defensive zone draw win which started the play that resulted in the Sharp goal. Zus has been by and large useless in the second line role against smaller, quicker team to this point, especially when he’s not winning draws. But even if he can’t keep up with Sharp and Kane, if he can put the puck in their grasp at the outset of the play, then the second line becomes far less of the possession black hole that it has been. Of course, Kaner finding a way would be nice too, as he’d overcome Dave Bolland’s uselessness in the regular season with little issue. But Patrick Sharp putting together a pretty impressive resume this post season on his opposite wing isn’t completely independent of the fact that Kane draws attention which gives Sharp space.

On the Hawk blue line, the best advice would be to stay the course from yesterday afternoon. As we’ve said throughout this playoff year, blindly firing the puck up the wall is almost certain death, and yesterday Hawk defensemen under pressure had at the very least one outlet less than 15 feet away to slide the puck to, making for quick controlled passes when exiting the zone. This, again will be contingent on Hawk forwards resisting the urge to take off the other way at the first inkling of possession in the corner. Also seeing the return of a Norris-caliber performance from Duncan Keith helps, who was everywhere in the zone with his quick starts and stops in tight quarters cutting off passing lanes and knifing pucks away with his stick.

After being severely underworked in the first and allowing a goal on a crossed-up coverage from Dave Bolland, Corey Crawford remained solid in net and most importantly gave barely any loose change for the slobbering hordes of Kings forwards to pounce on. Crawford will need to remain just as strong tonight, as his counterpart will certainly not be giving up any softies.

While it might seem like a relatively big deal to go up two games to none on the defending champs, this would not be an unfamiliar position for the Kings this post season, with four straight wins against the Blues after going down by the same count. The Kings will be even more ravenous tonight, knowing that if they can steal one on West Madison, they have a very very good chance of taking a death grip on the series once it shifts west, where the Kings have won 13 straight at Staples. Patience must once again be a virtue for the Hawks, as the order gets much much taller after tonight. Controlled breakouts and speed to the outside can gain them some traction, but solving the bad man in the mask will continue to require some fortitude. It’s there, they just have to be smart about how to take it. Let’s go Hawks.

Don’t Worry About It. It Happens To All Guys 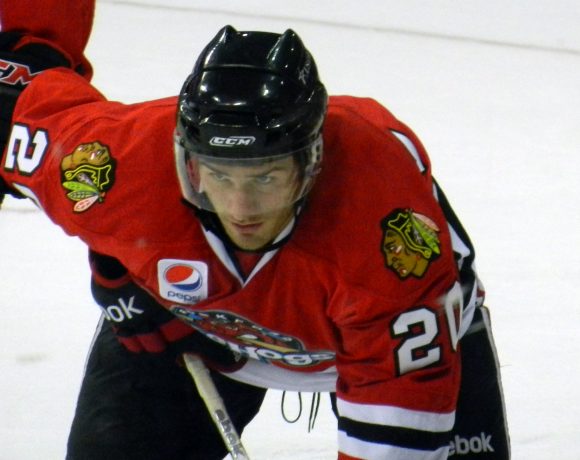