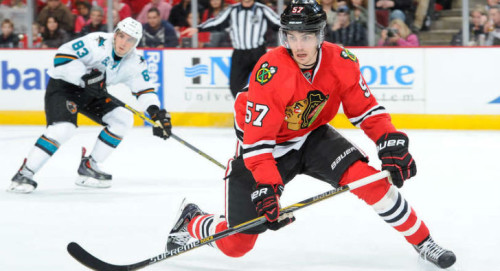 TVR, as I think we’re now legally bound to call him, won last year’s race to be the player Q falls in love with during training camp, sometimes just to prove how much smarter he is than anyone else. He joined such luminaries as Michael Kostka, Aaron Johnson, Nick Boynton, Jordan Hendry, Sean O’Donnell, John Scott, and probably one or two others I’ve forgotten to preserve my own sanity. And then TVR got hurt before he could prove whether he was just like those or the others, and during his injury layoff watched basically a clown car try and fill the role he had for all of 18 games so that a large section of the fans and media turned those 15 games into something Larry Robinson would be jealous of or something.

So we head into this season, and anyone who says they know exactly what van Riemsdyk is going to provide is either lying to you or to themselves or both.

It’s not to say that those 18 games weren’t good, because they obviously were. While he didn’t provide much offensively, that clearly wasn’t his job. He showed good awareness and most of all, patience in his own zone to get the Hawks up the ice. And considering the role he’s asked to play in the defense, that’s his main job. Yes, he got a little snowed under in the Final, but there’s no way he should have been playing after not seeing NHL action for nearly eight months at that point and it was a comment on just how bad everyone else on the third pairing was. So we can throw that out.

And TVR wasn’t puck-incapable either, making a solid enough first pass and showing at least some instincts in the opposite zone. Hell, he got his shot through more than Keith.

This Season’s Outlook: And here comes the problem. TVR wasn’t all that quick to begin with when he broke camp last year with the team, and then he suffered a second major injury on the same leg that he did in college. While the more defensive role on each Hawks’ pairing doesn’t require skinny-guy-from-original-NES-hockey-game speed, you do have to be able to move some to avoid getting bogged down behind your own net and being forced into turnovers. And we simply have no idea if TVR has that mobility yet or if he will at all.

Secondly, we have no idea what teams are going to do to him once they actually get a scouting report on him. Maybe he doesn’t turn well. Maybe he doesn’t make as good of a first pass under pressure or when not playing with Duncan Keith. It’s one thing doing it for less than 20 games. It’s another doing it for over 80.

And kinda worse yet, the Hawks need him to. I’d be willing to be he gets the softest landing possible, and that’s paired with Keith. But that doesn’t mean he can do nothing out there. There are times Keith needs support in his high-wire game, times he gets beat at either blue line, pucks he can’t retrieve. It only looks like Keith can cover the whole ice all the time.

And there is a lot riding on TVR. Because if he can hold down that spot, and he can allow for Seabrook and Hjalmarsson to become the pairing in front of the tank in Tianamen Square, and that allows Daley and whatever to bum slay on the third pairing, suddenly my stomach doesn’t rumble at the thought of this Hawks’ blue line.

But after only 18 games, we just don’t know. Neither do the Hawks. But we’re all going to find out.