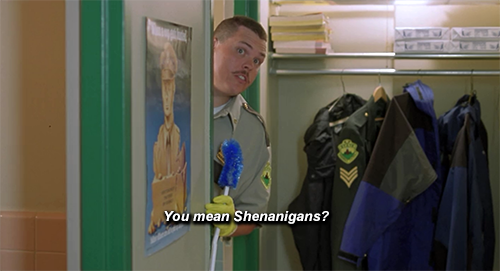 Holy shit, what a weird-ass series.  Night one featured some weapons grade wackiness, and one call that I’ve never seen before in MLB. Night two never happened because it fucking snowed the last Saturday in April, and Sunday featured the White Sox setting a team record for Ks in a game.  There’s a lot to unpack, especially with only two games to talk about.

– Carlos Rodon had a night he probably wants to have Total Recalled from his memory.  Everything he threw was barreled up hard by the Tigers, and quite a few of them left the yard.  After his previous two performances I’m willing to chalk this one up to just not having it, but he’s yet to make it through the 7th inning and that’s mildly concerning.

– Jose Abreu had a memorable night for multiple reasons, first of which was that he poked a dinger over the left-center field fence, but was too busy watching the flight of the ball to notice that Tim Anderson was also watching the flight of the ball and preparing to tag up from first base.  So nobody was watching anybody since Mr Boston missed Jose chugging down the line, inadvertently passing Timmy at first base and getting not only Anderson out, but having his HR turned into the weirdest single in Sox history. This also cost the Sox at least one run, which the Tigers managed to scrape back immediately the next inning.  That was all right because it set the stage for…

-TIM ANDERSON’S BAT FLIPPING, GAME WINNING EXTRAVAGANZA.  Seriously, I’m falling in love with this guy. I hope he starts throwing the bat farther and farther every dinger until he knocks out a kid up on the Skillz Deck.  He’s the kind of guy the Sox have been missing since Sale left; the type of player who people buy tickets to see.  Butts in seats, baby.

-The night was not all roses and cherry bombs (T-T-T-TIMMY BOMBZ!  Sorry Sam).  Unfortunately, Eloy Jimenez managed to sprain his ankle trying to rob the 5th HR given up by Rodon that night.  Honestly, he was about two miles away from even touching the ball, so it was kind of a useless gesture.  It was later diagnosed as a high ankle sprain, so we will see just how long Young Skywalker will be out of action, but were I to guess I’m thinking its gonna be June-ish

– Game 2 was fucking SNOWED OUT.  Seriously, spring can bite my ass.

-Game 3 was all about the Lopez four-seamer.  The Kid had all of his pitches working today, but none more so than the 4 seamer.  He threw it 69 times today (NICE), and used it as his punch out pitch on 13 of the 14 Ks he had.  This might be the best I’ve ever seen him throw the ball, and he’s improved on every start this season.  Once he realized home plate umpire Tony Randazzo was going to give him the outside corner, he was spotting his pitches right on the edge of the black all game long.  His last strikeout happened on the 104th pitch, and he touched 96 with it.  The Sox rotation needed a start like this, especially after DFA’ing Ervin Santana a few days earlier.

–Alex Colome worked the 9th in both games and came away with a win and a save.  Can’t complain about that trade at all, as he’s come as advertised.
-Jose Abreu seems to be shaking off his slump nicely, as he went 6 for 8 with 5 RBIs (should’ve been 7).  Now if we only had a league average OF to talk about this team might be sniffing .500