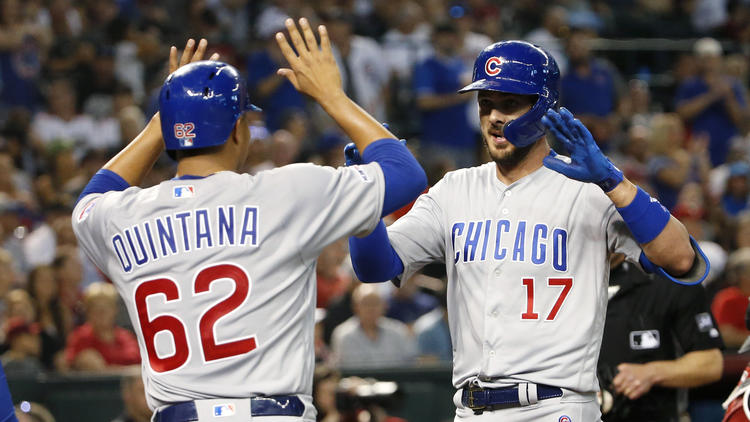 While I can always find a level to enjoy #WeirdBaseball when we wade deep into the extra innings, there’s something always infuriating about it as well. Because chances are when you get to a 14th or 15th inning, chances are you’ve had opportunities to win it and/or have made some mistakes to get it there and possibly blow it. But with a day off tomorrow, and yet another series win, we’ll let this one go.

Let’s clean it all up:

-The series started with Kyle Hendricks being kindling again, after a great start against these same Diamondbacks a week ago. The problems for Hendricks when he’s getting bounced around are always the same; he’s catching too much of the plate. That’s only one good start of The Cerebral Assassin, and I guess it’s somewhat fair to wonder if that new extension isn’t weighing on him a bit. It would only be natural, as along with the security is a feeling of having to perform at a different level. I still have no doubts he’ll get to where he’s been, it’s just not comfortable right now.

-On the other side of the spectrum, Jose Quintana continues to light it up. He made two bad pitches today that were thoroughly punished, but other than that he was barely touched. That change is getting used more and more, 15 times today, which is only making his other two pitches pop more. Here for it.

-And in the middle was Yu..I guess he was stuck there, huh? The first two or three innings on Saturday were painful, and it was hard to escape the feeling that Darvish, even with as good as his stuff is, is afraid of contact. Which means he’s nibbling, or losing control altogether. Then the Cubs got him some runs, and he wasn’t afraid to go at hitters. What you get is six shutout innings. With two off-days next the 110 pitches aren’t a big deal, as he won’t throw again until Saturday. Hopefully this is the start of something.

–Kris Bryant was making loud contact all over the place. That could signal big things.

-I was bitching on Saturday about Almora having to sit after a four-hit night on Friday, but I had forgotten that a change that the Cubs and Joe Maddon had made this season was planning out their lineup for the whole series in advance. I don’t mind them not deviating from it, and I would guess Almora is getting more starts in Seattle and when they return home. Adding two hits today wouldn’t hurt his cause.

-So Ben Zobrist has an extra-base hit now. That’s good. He’s doing something weird with his stance, and there’s still a huge drop in how hard he’s hitting the ball from last year to this. But he seems to recognize that if he’s volunteering Bote to be in the lineup ahead of him. That said, Bote then went ahead and left seven on today. No good deed goes unpunished.

-That was eight shutout-innings from the pen until Kyle Ryan got a little goofy. My hopes for Dillon Maples are still on very shaky ground. When you need Tyler Chatwood to save you…