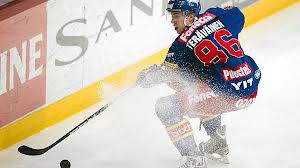 I haven’t done this yet this year, so let’s change that by taking a look deeper into the system and see how some of the Hawks’ kids are doing.

The Hawks only have four players in juniors this year. They are Travis Brown of Moose Jaw in the WHL, Dillon Fournier with Rouyn-Noranda in the Q, and this year’s first round pick Ryan Hartman at Plymouth in the OHL for skaters, and goalie Brandon Whitney at Victoriaville in the Q.

Fournier had a goal and an assist against Quebec on Saturday. He currently stands at 7-8-15 from 17 games this season. Before you get too excited about a point-per-game d-man in junior, remember the QMJHL is notorious for throwing up cartoon numbers for players. And Shawn Lalonde was a point per game in junior once.

Brandon Whitney is having another up and down year with Victoriaville, though he’s getting shelled with shots as he did last year. But his GAA is 3.65 and his SV% is .891. On Friday he got the win against Shawinigan, stopping 33 of 35 shots. But the next night he was yanked just 25 minutes against Rimouski after giving up 4 goals on 13 shots.

Travis Brown continues to be great when pointed forward, as he’s at 7-15-22 in just 20 games but is also a -7. He had an assist in two games this past weekend.

Ryan Hartman is currently sitting at 9-10-19 in 17 games, but is an unsightly -14 and 30 PIM. He scored against Missassauga this weekend.

The Hawks have a lot of guys in college hockey these days, so we’ll just pick and choose as we do this. They have two plying their trade at The Height as Boston College Eagles, Chris Calnan and Captain Stairwell Kevin Hayes. The younger Hayes is benefiting from the sweetheart spot on Johnny Gaudreau’s wing, collecting nine points in seven games. Calnan has three in six on the bottom six for BC. Hayes piled up three points in two games against Northeastern this past weekend.

Vincent Hinostroza has eight points in eight games with the Golden Domers, and he’s their leading scorer. He didn’t scratch in two games with Vermont.

His teammate Stephen Johns, probably the one to most keep an eye on in the college ranks, has four points from the back end and is a +4.

Tyler Motte at Michigan has four goals in eight games.

Matt Tomkins at Ohio State has started 7 games and is getting lit up to the tune of 3.04 GAA and a .901 SV%. His teammate d-man Sam Jardine was a +2 in a split with Minnesota-Duluth this weekend.

Over in Europe, Tivo Targaryen has 11 points in 15 games with three goals.