Running Out Of Space On Garbage Island 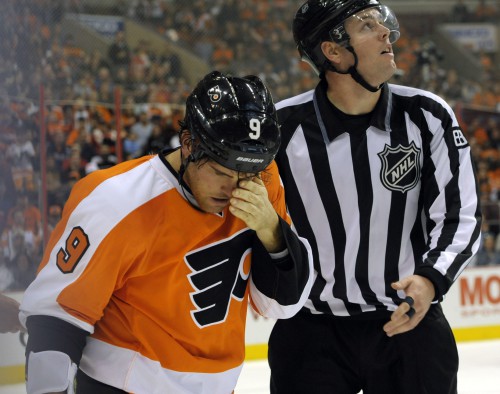 Boy, it hasn’t been the best week for goalies to reward my faith in the sport or humanity, has it?

Though I can’t tell you how delighted I am that on the day after Brian Burke wrote his article in USA Today defending fighting and talking about how “The Code” would solve everything if only we would let it, Ray Emery and the Flyers pretty much shit all over it. Even though Emery thinks he was in line with “The Code” because he told Braden Holtby he was going to punch him regardless of what Holtby thought. Oh wow Razor!  You beat up a guy who wasn’t trying to fight you! HOW TOUGH YOU ARE! Maybe next you can go brag about how you scored with your own girlfriend after!

Perhaps it’s not fair to paint the whole sport in a bad light when the most backward organization in the sport (the Flyers) and their most backward fanbase do something backward. Not everyone follows this path.

But only a sport as backward as hockey lets this go on. Think about what other sport is it considered customary that when you’re getting your ass handed to you on a platter it’s ok to then try and fight everyone. If you hit a guy out of bounds in football to send some message they toss you. If you throw at a hitter when you’re getting lit up they throw you out. Commit a hard foul in the NBA? Gone. Remember Andrew Bynum cheapshotting J.J. Barea when the Mavs had spent four games putting a foot in the Lakers’ throat via their anus? He was tossed, and a national laughingstock.

But in hockey? A coach like Craig Berube can unleash the unhinged Wayne Simmonds to leave his senses (if he ever had them) simply because the Flyers were getting their dicks knocked in the dirt. The only message it sends is that you’re a basketcase of a team and franchise who doesn’t know how to lose with class. You know how you send a message when you get waxed in a game? You work your ass off in the next practice and game to make sure it never happens again.

Everyone around the NHL loves to still point to Detroit as the model franchise, and I simply can’t imagine Mike Babcock ever lowering to this level. Remember when the Hawks put up a touchdown on the Wings last year in the Joe? Even if Tootoo had dressed that day, does anyone really think Babcock would have sent him out to run people? Please.

So if that’s what every team should be, how can it be part of tradition or what you do to stoop to the ooze of “sending a message?”

Emery’s actions were a joke. If he’s so manly and pissed off than maybe he should have found Tom Wilson himself. Though I am impressed Razor was able to fight with the crink he must have gotten his neck from turning around behind him so often and so quickly in that game.

And of course, what ends up on every highlight show?

And then today we’ve got John Tortorella, not exactly the most forward thinking coach, coming out to say that the players should be allowed to police themselves again. You know, now that I think about this, when were these halcyon days when the players did all the enforcing of rules and no one ever got hurt or pulled any dirty shit? Was it the 70’s when the Flyers were beating everyone up? Was it the 80’s when the game resembled a bar brawl at times and Shawn Burr and Glen Featherstone and whatever other goof was cross-checking anyone they could find in the jaw? Was it the early 90’s? Was it before the Bettman Lockout II when Todd Bertuzzi was nearly murdering Steve Moore?

I think these things that the old guard point to as what happens when the players don’t police themselves have always gone on, but now that we can see every game from our couch it just seems like they’re going on more. If a Shark boarded a King in a west coast start in 1997, I wouldn’t know about it until the next morning. Maybe. I probably wouldn’t get video of it.

Now? My twitter feed lights up. The video is posted within minutes. Everyone gets to share their opinion immediately. It’s a bigger furor. I don’t know that means these things are happening more often now.

If there’s one satisfying thing, it’s been watching the island that the neanderthals are stuck on erode to the point where it won’t be too long where they’ll look like Porky, Daffy, and Marvin hanging on to one sliver of planet. More and more people are leaving that island. Maybe it won’t be as long as a I thought before it’s totally gone.