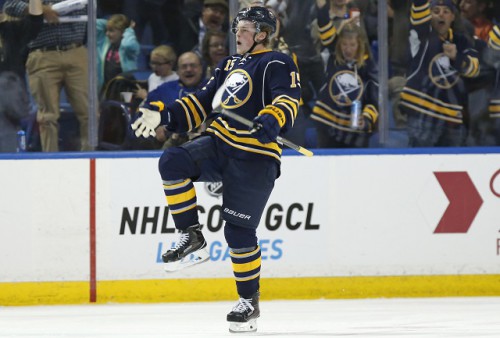 Andy Boron from DieByTheBlade.com was kind enough to answer some questions for us. On Twitter @DieByTheBlade.

Obviously, we’ll start with Jack Eichel. Not getting the press of some other rookies, but 26 points in 40 games is hardly embarrassing. First impressions of your new idol?

Honestly, after watching the 2008-2014 versions of the Sabres that didn’t feature a single superstar forward (Thomas Vanek is a questionable star) watching Eichel is almost indescribable. For a 19-year old rookie, he shows incredible hockey skills, is so unbelievably smooth with the puck, skates like a madman, has a great personality, and has tallied at least 12 incredible goal or assist highlights this season. He’s such a breath of fresh air for Sabres fans that it makes the team’s 29th place standing right now almost inconsequential. Seriously, nobody complains about losses as long as Eichel or one of the other young stars has a strong showing.

We’ve been fascinated by Rasmus Ristolainen for a while now, if only because at first we really enjoyed saying “Rasmus Ristolainen.” We saw him dominate the World Juniors a couple years ago with our beloved Finnish Baby Jesus Teuvo. It appears that this is Ristolainen’s breakout year. Are we seeing that right?

Oh yes, and the rest of the NHL better take notice. Ristolainen is using this season to stake his claim to the Doughty/Weber/Keith “Perennial Norris Candidate” tier of NHL defensemen. Think I’m over-exaggerating? He’s scored seven goals and 26 points this year and still sits 12th in the NHL despite being mired in a fairly long scoring slump. He plays about 25 minutes a night, and even though he plays huge minutes against his opponent’s top competition, has committed just one minor penalty all season. At just 21-years old, and with the kind of off-ice work ethic that superstars tend to have, the sky’s the limit for Risto.

Hiding behind Eichel is Sam Reinhart, who was very impressive the last time these two teams played. What should we watch for with him tonight?

Watch his work in front of the net. When he was drafted, Reinhart’s best asset was his Hockey IQ – we heard that term so much it almost became a cliche when discussing the rookie. And last season, Reinhart couldn’t take advantage of those smarts because he wasn’t strong or fast enough to hang with NHL competition, so he was sent back to the QMJHL. After a great offseason, however, Reinhart has legitimately earned himself a wing spot on Buffalo’s top line and has responded with nine goals this season, good for third on the team. He’s shown himself to be an exceptional presence in the opponent’s crease, screening the goalie and deflecting point shots on the power play, and is in the process of proving himself worthy of his #2 overall pick.

How much do you find yourself laughing over the Ryan O’Reilly trade?

Every day, good sir, every day. In all seriousness, the final story of this trade won’t be written for a few years, as the young players the Sabres gave up – Nikita Zadorov, Mikhail Grigorenko, and pesky prospect JT Compher – need more time to develop. However, Grigorenko and Zadorov have not had great showings thus far in Colorado, and both showed red flags in Buffalo as far as effort and responsibility went. Still, unless they both develop in to significant contributors within the net year or so, the Sabres will have won this trade in a landslide. O’Reilly is the team’s only deserving All-Star and likely the team’s next captain, and Jamie McGinn is a significant middle-six contributor this season. It took Sabres fans years to get over losing Chris Drury, and it appears they’ve found his replacement in O’Reilly. ROR has been the best thing about a Sabres season that includes Jack Eichel, if that tells you anything.

Last year the Sabres moved out frustration temple Tyler Myers for Zach Bogosian, among other players in that trade. We always wondered why Bogo couldn’t put it together in Winnipeg. Has being in Buffalo changed anything?

Not really. Bogosian this season has been what he’s always been, a #4/5 defenseman who gets played as a #2/3, and who you always think should be a better player than he actually is. That’s not to say he’s been incredibly disappointing, because Tyler Myers was often a #3/4 player masquerading as a #1/2, but the sooner the Sabres find another legitimate top-4 defenseman to help their blueline depth, the better. Bogo’s DJ skills, on the other hand, are top notch.

In reality, how far away are the Sabres from being contenders?

Playoff contenders? I fully expect them to be a part of the postseason race next year. Legitimate Stanley Cup contenders? Probably at least two or three seasons away, but that all depends on how quickly the 19-23 year old core group of Jack Eichel, Sam Reinhart, Rasmus Ristolainen, Johan Larsson, Mark Pysyk, and Jake McCabe can develop. If they all make big strides this offseason, and if the injured Robin Lehner can prove himself the goalie of the future, Buffalo could find them in the position Florida is this year, as a surprising contender at the top of the standings. And wouldn’t it be poetic justice to win the Auston Matthews lottery this year after finishing 30th two season in a row and losing?