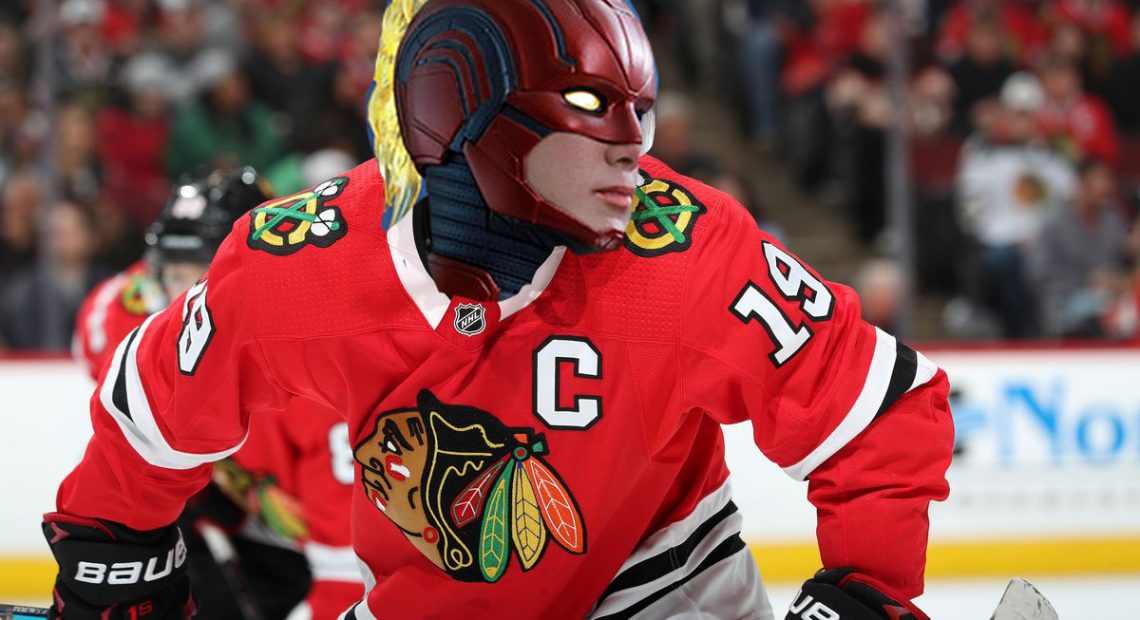 We’ll end our player previews with the captain, Captain Marvel as we dubbed him 11 years ago, whom most folks are taking as a sure bet. I’m not quite so convinced, but he’s the one player of the “the core” whose aging is being planned for, through the drafting of Kirby Dach. Toews was able to shut the critics down last year, with his biggest point- and goal-total of his career at age 3o. Maybe there is life after 30? We try and prove it every day (well, some of us). Can Toews keep the wheel in the sky turning? The variables on his team may hold the answer.

A Brief History: After the previous season, it was popularly thought that Toews was most definitely on the back nine of his career. A measly 52 points and 20 goals, the third straight season he hadn’t cracked 60 points, and we all at least wondered if he had finally moved into the final phase of his career as something of just a checking center. But if you looked a little deeper, you noticed that his SH% had cratered for two years, and his metrics were actually some of the best in recent memory. It wasn’t a huge leap to conclude that with a couple more bounces he still had songs to sing offensively. And he did, with a return to his career SH%, a little more tilt of his use to the offensive zone, and a newish, ready-fire-aim slant to his game that saw him put up a career-high in shots (new goalie pad rules probably didn’t hurt either). Tazer proved that he wasn’t ready to be taken out back quite yet, and there were some games that made you remember what it used to be like when he just decided the Hawks were going to win that night. Of course, it wasn’t enough, but that was more about the help than Toews.

It Was The Best Of Times: This can actually go one of two ways to be the best outcome, though sadly neither of them is the most likely. One is that David Kampf and some combo of Ryan Carpenter or Anton Wedin prove they can handle the defensive, harder shifts and assignments and Toews can continue to slant more offensively than he had previously in his career. His SH% stays around his career norm or even spikes, and the Hawks get another 30-35 goals again. Also, he finally remembers the “jam play” from the corner when he gets the puck down there on the power play, not that he shouldn’t always be somewhere else with the man-advantage.

Or, Kirby Dach balls out in the five games he’s given and sticks, Dylan Strome takes another step forward, and Toews can merely concentrate on the defensive side of the puck and what you get from him offensively is something of a bonus. Stick him with Saad and Kubalik or the like and having a checking line-plus.  Were that to happen it might only be 20-25 goals and 50 points again, but from a center who is second or third on the offensive pecking order that would actually be a bonanza. Think of him as older, non-fuckstick Nazem Kadri.

It Was The BLURST Of Times: Strome stalls out, Dach is sent back to beat up on children for another season (and to stave off his contract for another year) and Toews is asked to both check and score at age 31. He can’t quite find the juice in his legs every night, which sees his defensive game suffer while needing more help in the offensive end, at least forechecking, than he did in the past. Because he is starting more in his defensive zone, the metrics continue to slide and he can’t push the play himself to get the chances he needs. His SH% slides because he’s getting worse chances, and we’re left with yet another mirroring of Anze Kopitar‘s current cycle. And once again fans and writers begin to lament that he has three years left on still one of the biggest contracts in the league.

Prediction: I don’t think it’s going to be as bad as the latter section. I’m also highly skeptical that Dach is going to be given a proper chances to stick, which means the Hawks will absolutely need #1 center production from Toews again. They will try and cover for him defensively by having Kampf and Carpenter take those shifts on to start. But the lack of spark, and Jeremy Colliton‘s lack of slotting players for their shifts, is probably going to see Toews take on more shifts out of his own zone, slightly. Toews benefitted from the power play’s midseason nuclear streak, and I also remain unconvinced that will happen again.

I also feel like Toews is a good barometer for what this season is supposed to be in the Hawks’ plans, because the front office would not leave him in the dark about what their intentions were. If this is still another “rebuild” season, we probably won’t see the eat-your-heart-in-front-of-you Toews that we did get on select nights last year. We’ll get more of a professorial Toews, guiding Strome and possibly Dach through the waters. If they told him this is playoffs-or-else, we’ll probably see that fire in his pupils on occasion again.

Toews also is the barometer on the coach. Because he’s the captain, he will give every effort to hold the ship together. It’s what he does. But if Toews starts rolling his eyes or not believing in what he’s being sold, you’re going to know instantly. It happened with Quenneville, so you best believe it can happen with Beto O’Colliton.

Still seeing Toews clear 30 goals and 70 points. How he does it will go a long way to telling you what kind of team you have here.