Three Things We Learned From Week 4 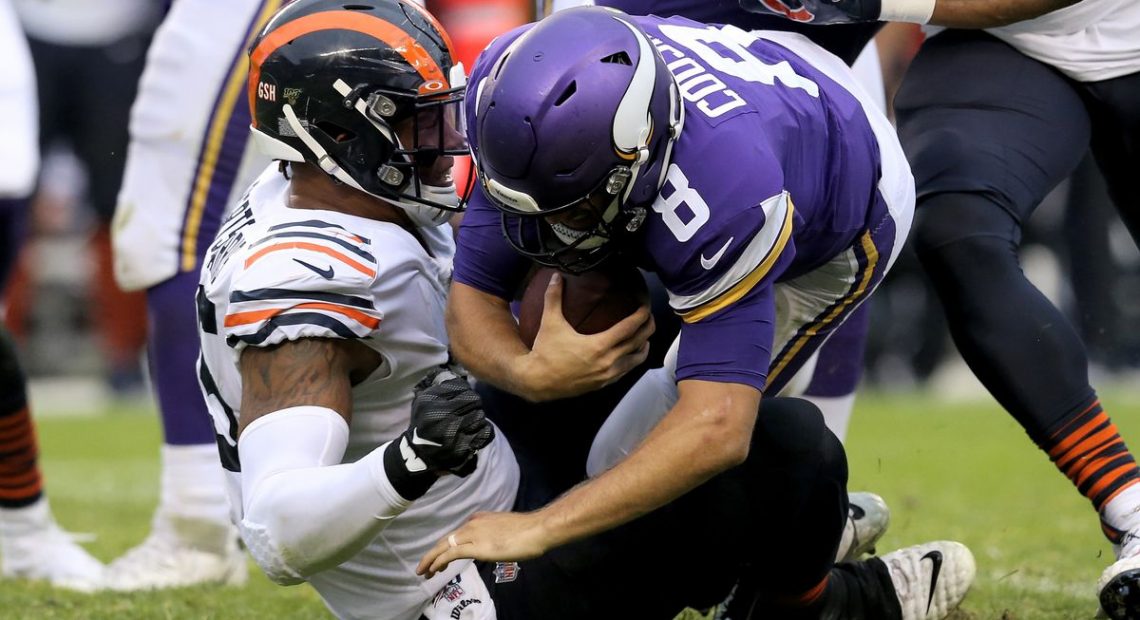 The Bears Defense Is Now A Comic Book Villain, Or Weapon, Or Both, I’m Not Sure

It dawned on me somewhere in the third quarter yesterday, probably just after the Bears stripped Kirk Cousins first thing in the second half on a drive that was supposed to turn the momentum of the game, that watching a great defense in football is not all that different from watching your team have a true ace in baseball. It’s just that the former is the latter with the music turned way up and sex club lighting.

Still, it’s a kind of visceral to watch one team or player simply swat away anything the other team is trying. Yesterday was little brother-big brother basketball, where no matter what the little tyke does it just gets ruthlessly swatted away into the next yard in a valuable life lesson that sometimes there’s nothing to be done. The Bears made plays from everyone and everywhere simply for the enjoyment of it. Because they felt like it. It was damn near pornographic.

I wasn’t the only Bears fan who greeted the hour before the game with trepidation, when news of Akiem Hicks and Roquan Smith (for whatever reason) missing out became official. That was the middle of the defense against the league’s best running attack. It seemed the worst possible combination of absences against the Vikings.

The Bears just rolled out Roy Robinson-Harris, Nick Kwiatkoski, and Nick Williams and watched them strut, dance, and pose all over the Vikings. Kwiatkowski used Dalvin Cook as his own Spartan shield at one point. They never missed a beat. While Ryan Pace’s tenure will be defined by whatever Mitch Trubisky becomes, it has to be said he can spot talent on the defensive side of the ball consistently.

There was something efficient about Lovie Smith’s defense, the other great defense of recent Bears vintage. They were happy to give up yards because they knew teams couldn’t be patient or clean enough to trickle down the field without fucking up or turning the ball over. They would get you eventually.

This one doesn’t wait around. They don’t give you anything. All they take is your soul. They come after you. And from every angle. Lovie’s team waited for you to fall into the bear trap they set. This Bears defense actively chucks you into it and then pours gasoline on you while twirling a Zippo and grinning all the time.

His overall numbers, thanks to one drive at the end of the fourth, don’t look all that bad. But once again, when faced with any quality on the other side of the ball, Cousins pissed down his leg and then asked his teammates to clean it up. Cousins either held the ball too long or didn’t sniff out blitzes or the rush in time. He missed the couple of open shots he had.

With a division opponent, the most enjoyable thing for a Bears fan is to have a QB and/or coach just good enough to break your heart. Cousins and Mike Zimmer will win just enough games to give Vikings fans hope, only for it to be hilariously and gloriously dashes in the most violent way possible. And right now it’s this Bears defense that will do it.

Cousins didn’t get much help from his coaches. Their only drive that produced points came in a no-huddle, which flattened out the Bears rush a bit. They should have been going with that far earlier, seeing as how they couldn’t block anyone normally.

But that’s the Vikings. They’re never going to get it right. Something will always go off the boil. They’ll fuck it up. We lost the Blues. I’m glad the Vikings are still here.

Don’t try and tell me otherwise. He makes odd noises and in about five years he’s going to sound like drunk Terry Boers. He never shuts up, and his analysis is barely middling. He sounds like an air raid siren. Predicting the play ahead of time isn’t really the job. Give me Ian Eagle and Dan Fouts every damn time when the Bears have to be on CBS.