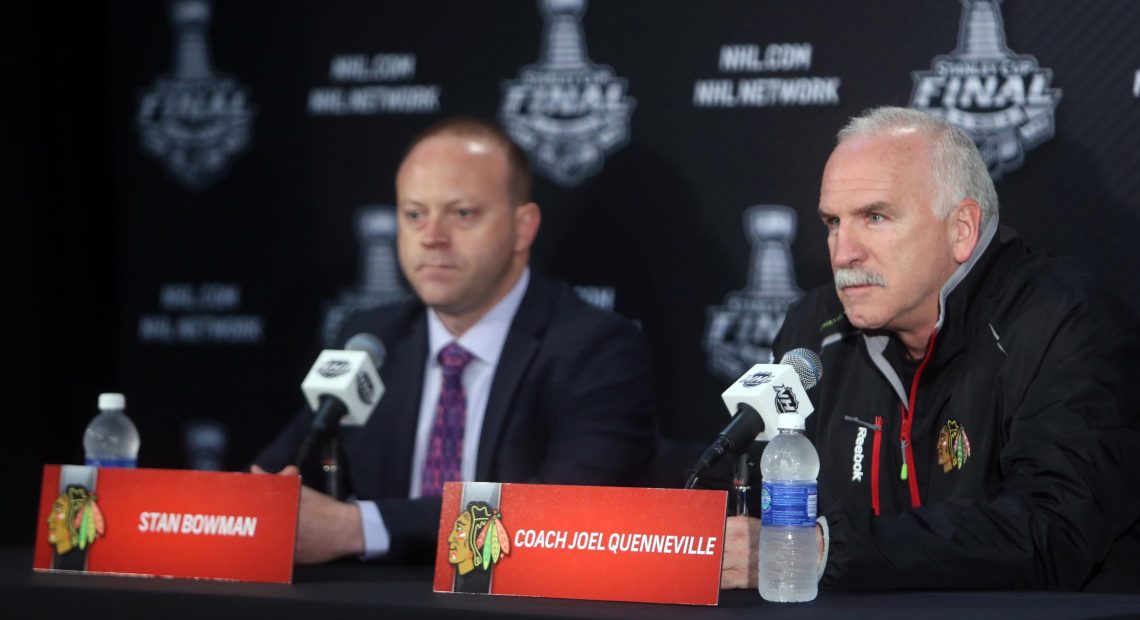 What’s basically going to happen is Monty and Rusty are going to be put on waivers first, and if no one claims them, the Hawks will be able to erase their salaries from the cap, as in the new CBA veteran contracts can’t be buried in the AHL or elsewhere. Should a team claim them, which they won’t, this will save the Hawks from using one of their two buyouts that could be executed either now or next summer. When this inevitably happens, this should kill any and all imbecilic speculation that the Hawks could or would use a buyout on Marian Hossa or Duncan Keith’s cap circumventing contracts that now come with a stiff penalty for retirement prior to the deal’s completion. This was never a realistic option, just merely a meatball Portillo’s fart of an idea, as if he were the first one to come up with it. These are two cornerstone players of this franchise, and even though the cap recouping penalties are stiff, there is still one remaining loophole that both the Flyers and Bruins are still using, which is Long Term Injured Reserve.

Both Marc Savard and Chris Pronger will never play in the NHL again, and that’s a sad reality. But neither can retire yet due to the financial ramifications that are presented to their clubs if they do, in both cases due to front-loaded deals, and Pronger has the cherry on top of his being of the 35+ variety. So they sit in limbo currently until their deals expire properly. If and when Marian Hossa calls it a career, look for this to be the Hawks’ way out. Furthermore, with Hossa’s back problems during the playoffs more than likely requiring surgery, he’d be ineligible for a buyout this summer anyway, as the CBA prohibits doing so on injured players. So what is left is the natural conclusion of cutting bait with the two biggest financial anchors relative to performance the Hawks have on the roster.

Also making the rounds is that Dave Bolland is available to anyone who wants him, as confirmed by no less of sources than Uncle Bob (McKenzie) and Pierre LeBrun.

Echoing what @Real_ESPNLeBrun tweeted, CHI's David Bolland is in play on the trade market. Scored GWG in Cup final.

Kudos to Stan Bowman for not letting sentimentality get in the way of what is a sound hockey decision. Yes, Bolland has been a member of two cup teams, but he will be unrestricted next year, removal his $3.375 cap hit would provide some room to breathe, and most importantly, his production has gone to nearly non-existent, Monday night notwithstanding. Yes, Bolland scored a cup winning goal, but that doesn’t change the fact that he was a millstone around Patrick Kane’s neck for 47ish games, forcing Kane to lead the conference in scoring largely in spite of him. He was also passed on the depth chart in the playoffs by a 36 year old Michal Handzus who had a sprained MCL and broken wrist, and Andrew Shaw who had not played center prior to this year. At best, Bolland will likely go for a 2nd and/or 3rd rounder this weekend, making up for the two picks sent to The Peg to acquire Johnny Oduya. But with 19:07 of the third period of Game 6 still fresh in the memories of GM’s around the league, the haul could be slightly more.

The Hawks have options to replace Bolland in the system, with Brandon Pirri leading the AHL in scoring and Drew LeBlanc and his GIANT FACE coming off a Hobey Baker winning season in the NCAA, and they’ll be given every chance to make the opening night roster. But there are also options out there in free agency. Matt Cullen has long been the apple of this blog’s eye and appears to be leaving Minnesota, and has the crafty veteran hands that could fit in well. Defensive ace and faceoff whiz Boyd Gordon from Phoenix is on the market as well. Both could potentially be had combined for at or around what Bolland is going to make.

Oh, and some guy named Vinny something is out there now too. To dream the impossibly handsome dream.