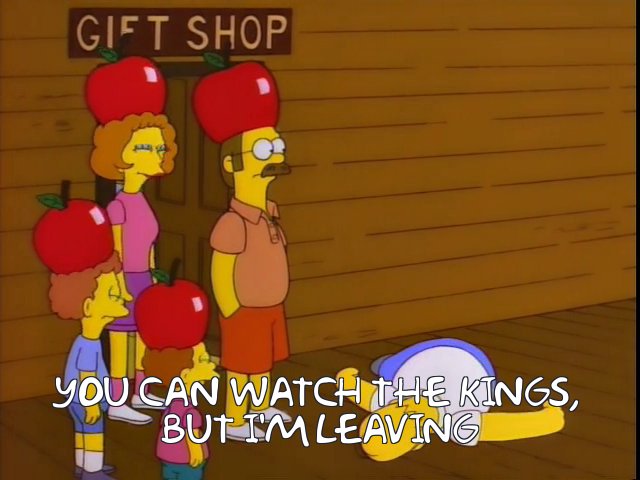 Clearly the highlight of the evening were the reaction shots of Bruce Boudreau as the Jets put his Wild to the sword again last night. You can tell he knows he’s utterly fucked here, and would have been even if Ryan Suter had been healthy. I wonder if that filters down to his team. We know his panic stations-like attitude in previous Game 7s always did. Anyway, let’s run it through on this drippy Saturday.

See, a lot of people think the Brian Elliot Experience means he’s getting punctured like Boromir every outing. Not so. The Elliot Experience means that he’s going to put together just enough good games, or stretches, to make you believe in him before he becomes a turned-over turtle. So was last night. He was excellent, Matt Murray definitely wasn’t, Flyers win, and now they’re believing again. But don’t you worry. Elliot will shit a chicken either in Game 3 or Game 4, and the Penguins will assuredly win the next two, whichever it is. This is the way he wants it.

There probably isn’t going to be a more lopsided series than this one. The Kings-Knights one has been but Jonathan Quick has kept it from getting silly. Devan Dubnyk quite simply is not capable, nor are the Kings facing the firepower the Wild are. It sounds weird to gush about just how loaded the Jets are, but there was their fourth line, a dominant fourth line, getting their third and icing goal last night. There’s nowhere for the Wild to turn. And the first two Jets goals were a result of a d-man simply going cowboy. That’s Dustin Byfuglien’s thing of course, it’s not as much Tyler Myers’s. But that’s what it takes at this time of year, because it’s the only way you’re going to outnumber the defensive team and get coverage to break down. This looks a lot like the Wild’s 2013 series against the Hawks, where they hung around in Game 1 but didn’t have another gear to find in Game 2 when the superior team could relax a bit. Sure, they might spasm a home win, but they’re toast.

Everyone needs this series to end now. The Kings might point to the absence (deserved, by the way) of Drew Doughty as the reason they basically went Mourinho on this one, but it’s no different than what they did in Game 1 when they had the gap-toothed scumbag in the lineup. They’re terrified of the Knights’ speed, because their blue line is slow and basically bad, so they’re going to do everything to keep it under wraps. The result has been two games that have set the sport back 20 years, and basically have us longing for the NBA Playoffs today. Compare Kopitar and the Kings this year to Toews and the Hawks all you want, but if the Hawks put on this kind of faire you wouldn’t watch and we’d resort to doing ketamine or something. Maybe Kings fans constantly complain about the individual awards their players don’t win simply so they can feel anything after watching this team all season. The lyrics to “Comfortably Numb” were written about watching a full season of this.