Night Songs – Round 1 Day 11: Oh Bob…You Came And You Turned Into A Turkey… 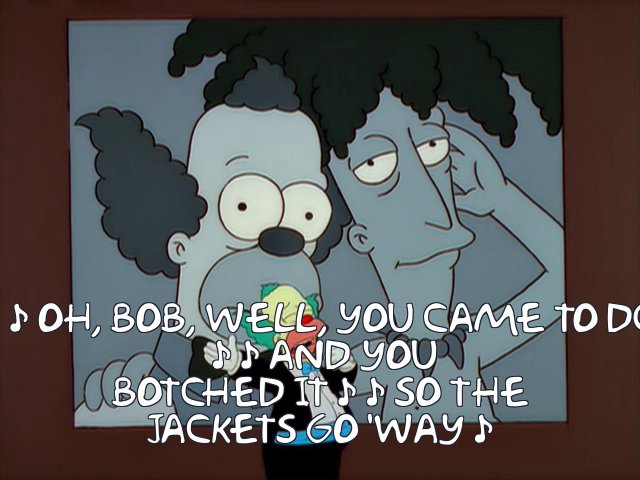 One blue team showed some zest in staying alive. Another very much did not. So as they said in The Tick, “Well that’s about it for the blue guy.”

I really want to believe that the Bruins are just doing this to torture torture THE NATION even more than simply paddling this team in four or five games would have done. Because it’s looking an awful lot like 2013 again. The Bruins even threw a 4-1 comeback at them in Game 5 only to fall short.

And yet…and yet, I can’t help but notice every time I look up, Charlie McAvoy–the supposed engine of this Bruins resurgence–is doing a might fine impression of a wavy-arm inflatable balloon man anytime the Leafs enter the zone against him. Can’t help but notice Tuukka Rask, who’s been utterly awful in games the Bruins can end a series, hasn’t looked very good. I can’t help but notice that when the line of Pastrnak-Bergeron-Marchand doesn’t score, the Bruins don’t score all that much, even though everyone told me that they were definitely not a one line team all season.

Still, last night the Bruins were pretty much all over the Leafs most of the game, and Freddie Andersen did that thing where he gets his team just close enough to have a crushing defeat. That’s the most likely outcome still here, especially if the Leafs repeat this thing where they’re getting barely 35% of the attempts. Bergeron’s line running over Plekanec’s time and time again assuredly is going to work out in the black and yellow’s favor sooner rather than later. Though I guess that sooner had better be next game.

Given how quickly hockey media loves to quickly and usually unfairly criticize Russian players, it’s kind of amazing they haven’t gotten to this yet: Sergei Bobrovsky sucks in the playoffs. His career save-percentage is .891 in 24 games played. Granted, three of those came against the Penguins and two of them were in series where Columbus was seriously overmatched. You could forgive that a little, though saving an overmatched team is what Bob does for 82 games a year.

But this Jackets team was not overmatched by the Capitals. They may not be as good, but it was pretty close. And in the other net was an untested rookie or a veteran having a very shaky season. And the latter was miles better than Bob. The Caps basically have a top line and Oshie and Backstrom, and yet they scored 22 goals in six games against Bob. On 221 shots, which makes for a .900. His SV% at evens was .925, which is fine, and it was expected to be .919, so he did ok there. but he just fell apart on the kill with a .826. And the Jackets were not giving up great chances there.

It’s not like Columbus is going to make a change in net, but this should be an issue next year when you think they’re going to really want to do something other than be the chorus girls for the show before shuffling offstage again.