You Get What Anyone Gets: Saying Goodbye To The Philadelphia Flyers 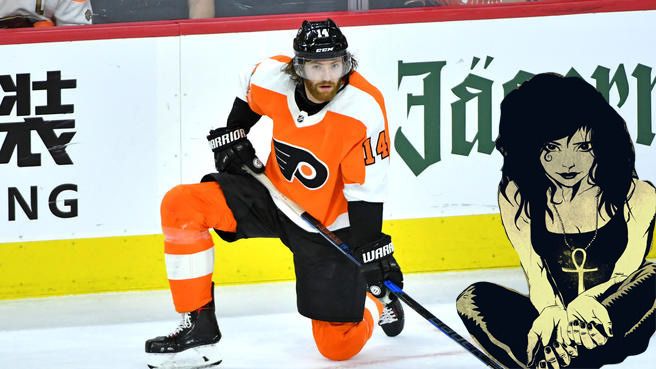 It used to be tradition that playoff exits were complimented by eulogies on Puck Daddy. But with Wysh off in the Connecticut hinterlands and those who remain at Yahoo! being a bunch of Canadian giblets who take things far too seriously (and Lambert being angry and definitely not a Bruins fan), we don’t need them to do what we do best. So fuck it. We’ll eulogize all 15 teams that will eventually fall. And now, to the routine of Western PA…

If I were to ask you to sketch out what a Philadelphia Flyers crash-out would look like, you almost certainly would have presented something that looked a lot like yesterday afternoon. Even if the Flyers haven’t done this as much recently as their reputation suggests, you would know exactly what it looks like.

They would take a lead in the second period. They would be running all over the place trying to hit everything that moves, including their captain boiling over. Their crowd would be in a frenzy. They would be on the cusp of a real breakthrough by sheer fury. And then their superior opponent would inhale deeply and say, “Ok, enough of this bullshit.” Then there would be defensive breakdowns everywhere. They would treat the puck like it was covered in space herpes. Their goalie would have an existential crisis and have to stay in because the one on the bench is an existential crisis. They would give up an avalanche of goals in like four minutes, and then it would be over. Their still-Super-Bowl-drunk fans would hurl whatever garbage was hurl-able onto the ice, as the only garbage they couldn’t throw was themselves. But they’ll figure that out one day. It was ever thus.

It wouldn’t be complete without Flyers fans conspiracy/inferiority complex shining through, which I guess is what happens when your city is wedged between a bunch of other cities people would rather go to and your weather level switches from winter to sweat. By the time October rolls around, Flyers fans will have convinced you that the trip on Sean Couturier leading to Guentzel’s goal was a crime on the level of various Kennedy assassinations, even though Couturier looked like he was trying to moonsault a ghost and probably was having trouble standing up anyway thanks to his own teammate shredding his knee in practice. Something about Philadelphia and practice.

Only an organization and institution this rockheaded could just wave away their dumber version of Rocksteady and Bebop d-man, Radko Gudas, handicapping their #1 center in practice because “THEY’RE SO TOUGH.” This is a place that wears it as a badge of honor that they get their sandwiches out of a fucking gas station. You’d think the Flyers would know that running around and grabbing your sac for a whole game eventually is going to leave your defense and your goalie exposed, and yet they dive headlong into it every time. In Philadelphia it’s always 1976.

Lots of people will tell you Cold Ones have a bright future ahead of them. And they do, if you think being the Maple Leafs is a bright future. They could be loaded at forward in two years, but have exactly one d-man worth a shit in Ivan Provorov, assuming Gudas hasn’t broken  his will to live by passing him another hand grenade when he’s already covered. If this series proved anything it’s that Ghost Bear is just a cooler name for Marc-Andre Bergeron (stick tap to Anthrax for that one).

And the Flyers will continue to have a Gudas on their roster, because it’s what they do. Fuck, you can totally see Roman Polak ending up here when he’s finally forced out of the loving arms of Mike Babcock. If we can get Gudas and Polak on the same pairing we actually would have Rocksteady and Bebop on an NHL team.

And when it all goes belly up again because wearing orange turns every goalie into an actual traffic cone, there will be Claude Giroux yapping and running around like a frat boy on a coke binge, without actually scoring any goals that might help his team get anywhere. In his last 19 playoff games Giroux has three goals. But man, he sure got all of Carl Hagelin eight seconds after the puck was gone, didn’t he? And in the end, isn’t that the real truth? The answer, is no. Giroux joins the unfathomably long list of ultra talented Flyers that the city and fans turned into a slobbering dingus with granite for brains and then hands when it matters most.

So long to the Flyers, who definitely are the Flyers more than anyone has ever been anything else. It’s reassuring in a way, the dedication to their character. If the NHL were a movie they would be the scenery chewers. They live in this role and always have, and always will. And it’s always good comedy.