The Hawks will take their Keithers-less act on the road for the first time tonight, and they’ll face a Jets team that was a major headache for them last year (though not at MTS Centre). Winnipeg won all three games at the United Center last year, and a couple of them pretty handily. This will be a major test for the Hawks’ reshaped blue line, and they very well could need Corey Crawford to bail them out again as he did Monday.

It’s been something of an uneven start for the Jets, which makes a lot of sense because they’re basically an uneven team. They’ve clocked the Bruins and Rangers on the road, and gotten pretty well smooshed by the Kings and Blues at home as well. They sit one point behind the Hawks at 5-3-1 at the moment.

The big story with the Jets so far is that they’re blending in some products of what some argue is the best system in the league. And the main one in Nikolaj Ehlers, who has four goals and seven points so far and is flying around the ice at such a pace that he probably sounds like a major league fastball’s seams cutting against the air. Blake Wheeler continues to be Max Pacioretty West though no one ever seems to notice. It’s only been nine games but this finally might be the year that Mark Scheifele actually becomes the #1 center he’s always promised. A couple other kids in Andrew Copp and Nic Petan are skating on the 4th line, and they both have pedigrees that suggest they could become much, much more.

The Jets are just above water in possession when adjusted for score, but they’re giving up the 4th most shots per game in the league. At evens they take and give up about 29 shots per game. But if you’ve seen the Jets, their games are often organized chaos (wait that doesn’t make any sense). They’re big and really fast and want to play fast just not with all that much control. They want to hit you, and they’ll run out of position to do it. They want to get up the ice as quickly as possible, and they’ll flee the zone to do it. Especially at home in front of those frozen nutjobs, games can look frantic.

While the forward corps goes 12 deep, there are still some issues on the blue line. After a splash last season that caused optimism from Tyler Myers, that hasn’t carried over to this season yet (that seems like a familiar pattern with Myers). Dustin Byfuglien still pushes the play pretty well, but when the play pushes back there are still problems. Jacob Trouba hasn’t quite grabbed the league by the throat yet, though if you can believe it he’s still only 21 and there’s time yet. Mark Stuart does Mark Stuart things, which are generally bad for whatever team he’s dressing for. Toby Enstrom and his comically long stick (HEY HEY) still mans the top pairing and is solid in a way that you’ll never noticed he actually played.

The Jets gave the Hawks all sorts of problems last year because their forward line is huge and it’s fast enough that it can keep up with the Hawks. They could get on the Hawks’ defense before they could play their way out of the zone, and there’s no way the Hawks can win enough board battles with this team to carry the play effectively. It’s going to be a real test for the Hawks tonight because they’re only carrying one d-man who can skate away from the Jet forecheckers, who will assuredly be set to Ludicrous Speed tonight, and that’s Trevor Daley which doesn’t do much for anyone. Which means the Hawks forwards are going to have be deeper to aid the under-attack blue liners, which means it’s going to be a trick to just get out of the zone at times, much less with possession. That weak-side stretch pass from Seabrook and TVR is going to come in handy tonight if the Hawks can find the time.

All that said, the Hawks have never lost at MTS Centre, going 4-0. The Jets can get unhinged pretty easily, so cashing in on the power play is almost paramount given the Hawks’ struggles scoring 5-on-5. It’s always a loud affair up there, so enjoy the noise. 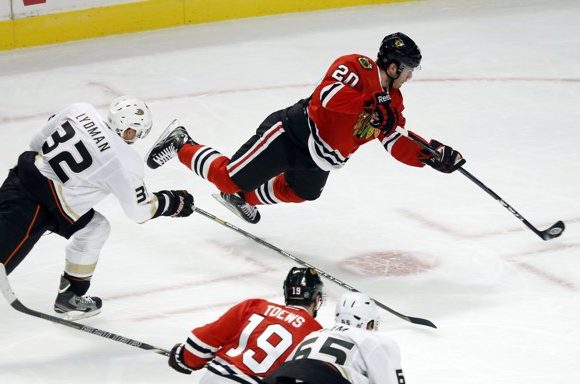