Let’s Look At Someone Else’s Cap Situation For Once 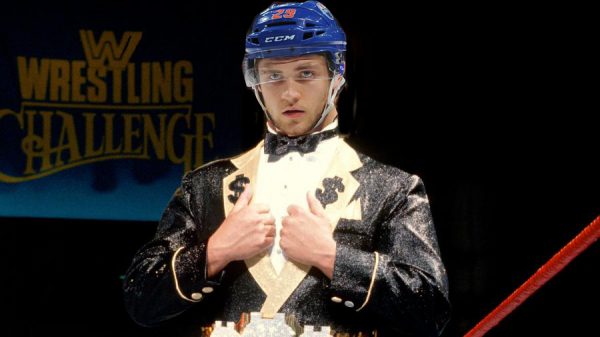 Some free agent news breaking the past couple days, which is rare for August but hey we’ll take it.

-Today, the Edmonton Oilers signed Leon Draisaitl to an eight-year, $65 million deal. Drice was coming out of his entry deal, and the Oilers weren’t going to fuck around with a bridge deal, just like they didn’t with Run CMD who starts taking home $12 million a year starting the season after this upcoming one.

And nor should they.

While some would love to point to Draisaitl running shotgun with McDavid as the main driver of his 29-goal, 77-point season, it has been this blog’s opinion that Draisaitl is the dog’s bollocks. While 77 might seem a huge jump from the 51 that came the season before, considering it’s from ages 20 to 21 it’s not as huge as it appears. Secondly, Draisaitl is a natural center, which is where his true value lies. And he should be moved back there for a majority of this season, which should make Ryan Nugent-Hopkins available via trade either during the season or after it. Especially as the Oilers have ended up with Ryan Strome who can play center as well.

Still, there’s problems coming for the Oilers. In ’18-’19, the Oilers already have $60 million committed to just 13 players. And that’s without Strome’s and Darnell Nurse’s new paper if that’s warranted after this season. If they’re lucky, Strome will just take most but not all of RNH’s slot.

This is what happens when you have $10m committed to Milan Lucic and Kris Russell, which is just so funny I almost can’t breathe. And both have no-move clauses. This is the good stuff, people. So that’s 12-13 players they’re going to need with $15 million to spend.

-Meanwhile, the non-stop sitcom that is the Boston Bruins came up with a new episode yesterday, when rumors leaked that contract negotiations with David Pastrnak had gone so far south they were looking to shop him. Some of this screamed “generated by the agent,” but with the Bruins c’est la vie say the old folks because you never can tell.

Much like Draisaitl, there’s a temptation to pin Pasta’s production on getting to run with Patrice Bergeron for half the season. But his production didn’t drop when he skated with David Krejci (when will that guy ever get his due?) either. His 13.9 SH% was the exact same as he’d put up the previous season, and his metrics are solid as well. His 70 points are real as well.

Which probably means he and his agent are looking at Draisaitl’s deal and getting warm in places all over their bodies. These are two players who busted 70 points at ages 20 (Pastrnak) and 21 (Draisaitl), and the market apparently was just set.

What exactly the Bruins are waiting for is anyone’s guess. They have just under $11 million in space this year, and just over $22 million for next assuming there’s no rise in the cap. Chara’s salary comes off the books after this season, and if you’ve watched him play the last couple of years you know it’s time for him to head to a farm upstate. There are no huge checks waiting, unless Frank Vatrano really does something for you and I don’t know why he would. Ryan Spooner goes RFA after this season, and while he seems to drum up a ton of trade interest every season, he’s a really solid 2-3 tweener center. He slots perfectly behind Bergeron an Krejci, and that’s where he should stay.

Perhaps the Bruins just don’t want to hand any kid a bigger salary than either Krejci or Bergeron for the principle of it, but I don’t know how that really applies anymore. Those two veterans signed their deals when they did (two years ago for Krejci and three for Bergeron), and markets change. It’s not Pasta’s fault that they thought it necessary to hand $6 million to human dog biscuit David Backes.

Here’s another team that has simply failed to identify the 3-4 players that are its core and simply not care about the rest. And even four is pushing it, as we’ve previously discussed. It’s Bergeron and Krejci, and there’s nothing on the back end. You can kiss my ass with Torey Krug and Zdeno Chara is past it. We could have the Brad Marchand debate all day, I just want to see him skate one shift away from Bergeron before I decide what I think he is.

Pastrnak has done that, and at 20 he should be doing it for a while. Fine, there’s your four, with Rask. Guess they’d better hope the very pie-faced Charlie McAvoy is all they hope him to be.