Don’t Ever Let Your Heroes Talk 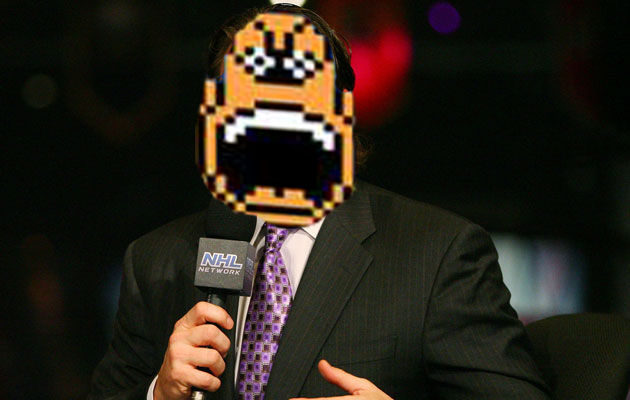 At this point in my life, at least circling the concept of being an adult without actually becoming one, I know that separating the art from the artist isn’t only a good idea, it’s pretty necessary most of the time. I know Jeremy Roenick is getting ever more bloated, both physically and philosophically, and has essentially been a barking face-orifice for the past five to ten years now. So I have to keep his playing career, perhaps the single element most responsible for my Hawks and hockey fandom, separate from the man himself. And most of the time, it’s easy.

But every so often…

If you missed it, good ol’ JR went crusty old white guy on Marshawn Lynch for sitting during the national anthem. He then went on to praise what turned out to be a fake tweet from noted lunatic James Harrison about essentially beating up anyone on his team that didn’t stand for the national anthem. To scrape the surface off of this is akin to batting practice, but I like batting practice.

First off, Harrison is a noted wife-beater, admittedly so, and is generally though to be off his rocker most days. He is not a star you’d want to hitch your wagon to. Second, good ol’ JR once represented this nation on the Olympic team by being part of a team that trashed its hotel when it got its ass kicked. And actually, the symbolism of a bunch of rich, white guys trashing something because something didn’t go their way is  far too on-the-nose and a bit on the chilling side.

So again, I get it. Blowhard says something blowhard-y and looks stupid. Part and parcel of the times, I suppose.

As for digging any deeper, I would ask people like Roenick what it is that makes them so angry about this sort of protest or statement. If it’s about some misguided “respect for our soliders” thing, we know that our soldiers actually fought to keep this a place where you’re free to do this sort of thing.

But I usually think that’s a red herring. It’s used to distract from someone who doesn’t want to bother with listening or even considering they might be at least complicit in a system that has at best underserved and at worst completely fucked over far too many members of our community. And it’s here that I would argue that people like Lynch, or Kaepernick, or Megan Rapinoe, or anyone else who has taken up the cause in our sporting events and elsewhere, actually love this country more than people like Roenick.

Or more to the point, they love America: The Idea more than America: The Reality. And to me that’s what love is. Perhaps I have a skewed vision of what love and relationships should be, but I always thought of it as two people/entities lifting each other up to be more than they were. Not simply a reward for what you are. And for far too many people, America: The Reality does not come anywhere close to lining up with America: The Idea. And instead of just lamenting that fact and throwing their hands up, they’re using their platform and voice to try and bring these two things in line and maybe one day to the same thing.

Now, you’re free to point out that those who created this country were a bunch of rich slave-owners, and perhaps America: The Idea never truly was a thing. Maybe it was always meant to be this way. Some days I feel like that. And yet whether that’s the case or not, this country and banded together and risen up to counter imperialism, against slavery, against fascism and Nazism (three of four of these seem quaint right now, doesn’t it?). There have been times where we looked within and said that no, women should have the right to vote as well, And then people of color. That everyone should have the right to marry who they love. So whatever the original intent was of those men in Philadelphia, sweating their ass off in some hall, we have pointed this country in the right direction a bunch of times. We have pushed ourselves and this country to be more.

People like Roenick are perfectly happy to let this country become fat and complacent (most of the time literally so), because it works out ok for them. Lynch, Kap, Michael Bennett, and those who faced actual grave danger in Virginia this past weekend see something they love and want it to be better. They want to push it to be more than it is, so that we can all be more than we are.

To me that’s love. If JR would close one orifice in his head and open two others, maybe he would see that. And he certainly wouldn’t be alone.